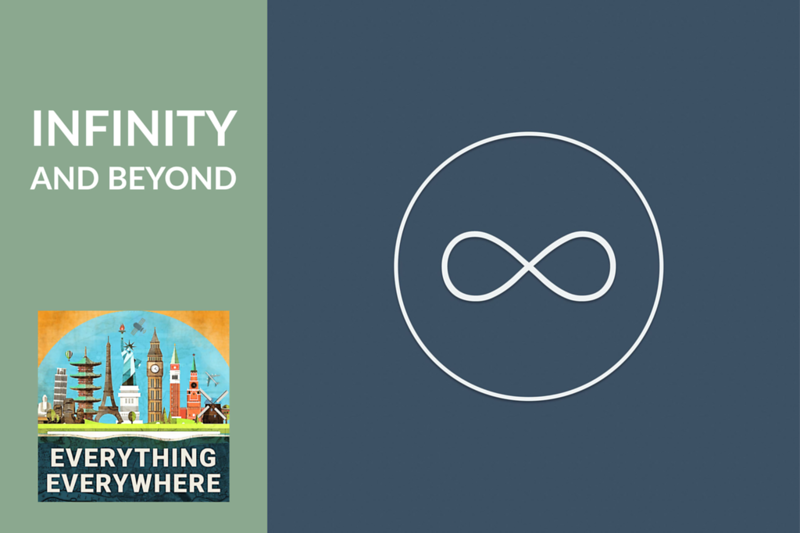 However, what if I were to tell you that there is something even bigger than infinity? Or, to be more accurate, there are infinities that are bigger than other infinities?

Follow me down the rabbit hole as I investigate infinity on this episode of Everything Everywhere Daily.

My audiobook recommendation today is The Mystery of the Aleph: Mathematics, the Kabbalah, and the Search for Infinity by Amir D. Aczel

Toward the end of the 19th century, one of the most brilliant mathematicians in history, Gregor Cantor, languished in an asylum. His greatest accomplishment, the result of a series of extraordinary leaps of insight, was his pioneering understanding of the nature of infinity.

How he came to his theories and the reverberations of his pioneering work, will shape our world for the foreseeable future. Cantor’s theory of the infinite is famous for its many seeming contradictions; for example, we can prove that in all time there are as many years as days, that there are as many points on a one-inch line as on a one-mile line.

This is an episode I was very unsure about doing. I thought of it over a year ago when I first launched the podcast.

The reason I was hesitant is that the ideas I’m going to talk about are much easier to explain if you can illustrate them. It’s just hard to do in an audio format.

But I realized that this is a daily show, and if I totally fall on my face, I can just get back on the horse tomorrow with a brand new show.

The concepts I’m going to be talking about are actually not difficult to understand. They usually are only presented in a university-level mathematics course, but there are no equations involved. It is nothing more than ideas.

If you don’t get some of the ideas, feel free to go back and relisten to a section, or find some other sources online which can help illustrate the concept.

My end goal is to show you that there are some infinities larger than other infinities.

This will start in the 19th century with a German mathematician named Georg Cantor.

Throughout history, mathematicians have had difficulty dealing with the concept of infinity.

Cantor took steps to try and rethink the very foundations of mathematics. To do this, he created what is called Set Theory.

Don’t overthink the concept of a set. It really is as simple as what I just said. The things in the set don’t even have to be the same sort of things.

In fact, it’s so simple that you might be wondering what the big deal is. Well, it turns out that this idea of a set is a very handy way to think about mathematics.

For example, what does it mean if two things are equal to each other? Again, a very simple idea, but one which can be really tricky to answer when you get into the weeds.

It also helps us define what a number is. Five is equal to any set which has the name number of objects as I have fingers on my right hand. The number five represents the cardinality of a set with five members.

So far, this is all really really simple. So simple, that you might wonder what is the point. It actually seems rather obvious.

Well, a set can also have an infinite number of members, and this is where things get interesting. We can also use the same techniques to determine if things are equal on sets of infinite size.

The infinite set that we’ll look at first is the simplest such set: the set of natural numbers.

This is just all the normal counting numbers that you are used to: one, two, three, four, five, six, etc.

If you start playing with this set, then interesting things happen.

For example, if you add any finite number to it, the size of the set stays the same.

Now room one is freed up, and there is a place for you to stay.

Now let’s assume that an infinite number of people show up asking for a room. Again, all the rooms are sold out.

This time, you can find space by having everyone move to the room which is twice the number of the room they were previously in. Room one moves to two, two goes to four, three goes to six, etc.

Now you have space for an infinite number of people.

Likewise, you can subtract a set of infinite size, and it won’t change the original set. For example, all of the odd numbers match the set of natural numbers one-to-one, yet the odd numbers are half of the numbers.

Any set which equals the set of natural numbers is called countably infinite.

What number represents this set?

You might have heard that infinity isn’t a number, and that’s true. Cantor created a new number called Aleph null or aleph zero, to represent the number of this infinite set. Aleph is the first letter in the Hebrew alphabet and he picked it because they were running out of good Greek letters to use in mathematics. This is called a transfinite number, and as you can tell from my above examples, it doesn’t behave like regular numbers.

Cantor then wondered if the set of natural numbers was the same as the set of all fractions, also known as the rational numbers,. There is an infinite number of fractions between any two numbers because you can always just divide by two.

Through a very clever technique, Cantor figured out that the set of all fractions, was equal to the set of natural numbers. It was countably infinite.

You can continue this indefinitely. All the fractions are on a line, and hence, are countably infinite.

This was a surprising result, but the next result was even more surprising.

The next question was if the set of natural numbers were equal to the set of real numbers.

The real numbers are all of the numbers which can and can’t be expressed as a fraction. A real number is expressed a string of infinite digits. Pi is a real number, as is the square root of two, and any infinite random string of digits to the right of the decimal point.

The proof that Cantor came up with rocked the world of mathematics. It was probably even more clever than the technique he came up with for rational numbers.

This is the part that might be hard to visualize, so listen closely.

With every possible number accounted for on the list, Cantor then set to create a new number.

He then took the second digit in the second number and added one to it.

He then took the third digit in the third number and added one to it.

You go diagonally down this list changing the nth digit in the nth number.

What you get is a brand new number that can’t be on the list. Any number on the infinitely long list has to differ from this new number in at least one spot.

The problem was, the stipulation was that the list was complete. It supposedly had every number on it.

This is called proof by contradiction.

The implication of this contradiction was that the set of real numbers is bigger than the set of natural numbers. It isn’t countably infinite.

That means there is an infinity larger than infinity.

The set of real numbers was given the transfinite number of aleph 1.

As I mentioned, this realization rocked the world of mathematics. Many people couldn’t get their heads around it, even though it was true.

This diagonal proof method was used by Kurt Gödel to prove his incompleteness theorem, which rocked the world of philosophy when he proved that in any logical system there are statements that cannot be proven.

If you think the idea that there is an infinity larger than infinity is weird, it gets weirder.

There is an infinite number of infinities.

One of the biggest outstanding problems in mathematics deals with these infinitely large sets. It is called the continuum hypothesis, and it states that there are no infinite sets between aleph 0 and aleph 1 in size.

Mathematicians think this is true, but so far it has not been proven.

If you take the time to really understand it, then you too will be able to prove to your friends that there is something larger than infinity.