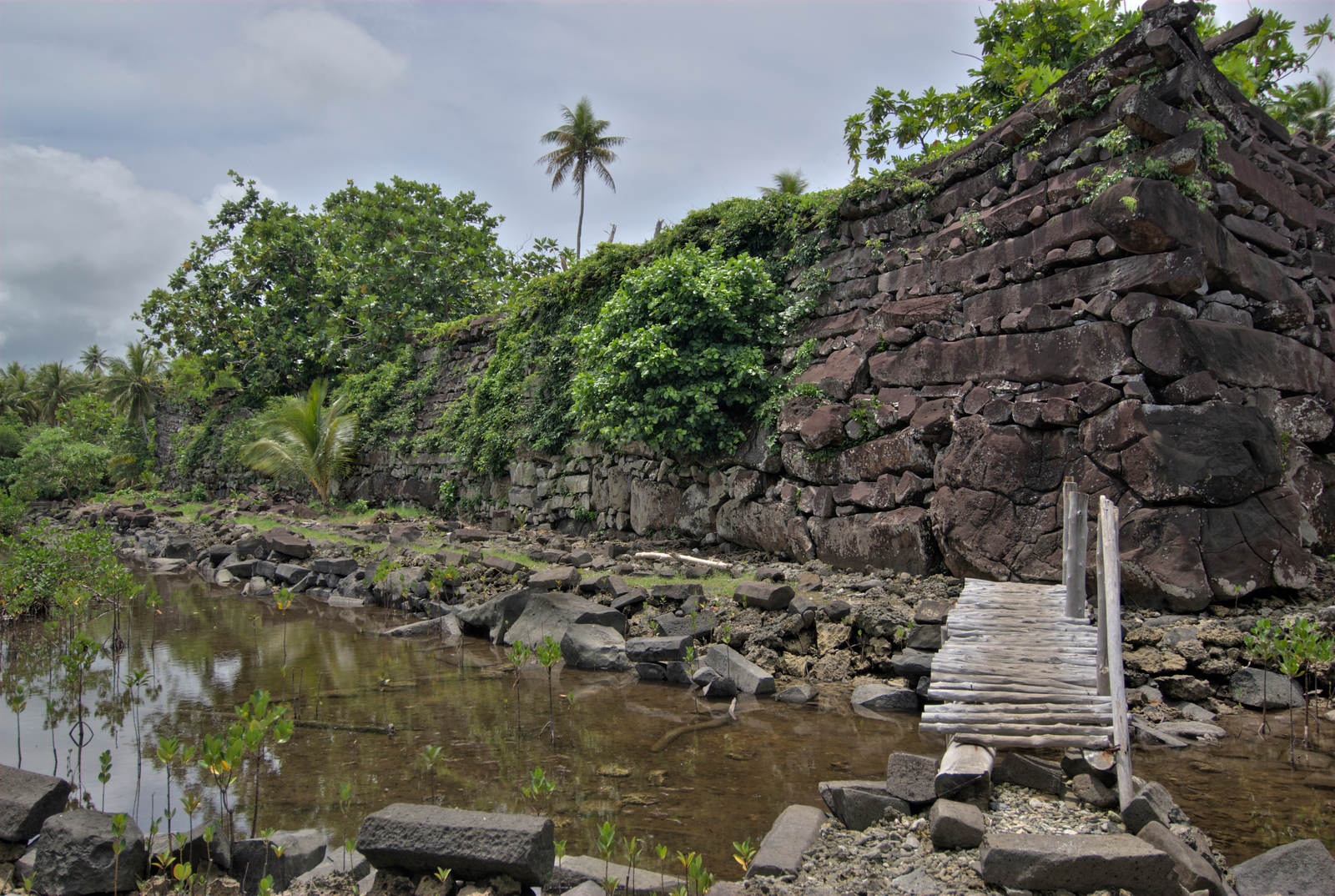 Nan Madol is one of the most fascinating and significant places in the Pacific. I first visited Nan Madol in 2007 as I began my around the world trip. However, it took until 2016 to be placed on the list of UNESCO World Heritage Sites. The site is extremely deserving of world heritage status and for many years it was number one on my list of places that should have been world heritage sites.

The site has been called “the Venice of the Pacific” because it is a network of small islands separated by canals and connected by bridges. In fact, the name Nan Madol means “spaces between,” which references the canals. Most of the islands have a structure that can best be described as a log cabin built with basalt rocks. Geologic testing shows that many of the rocks were brought from other islands to Pohnpei, and it hasn’t been positively determined how they were transported.

Located in Eastern Micronesia, the sometimes bizarre-looking structures of Nan Madol were used both as dwellings and as burial sites. Let’s dive into the significance of Nan Madol, as well as how to visit and what you should know before you go.

Nan Madol: Ceremonial Centre of Eastern Micronesia is the official name designated to the site that is composed of megalithic monuments located within the Pacific region. These megalithic monuments are located on 100 artificial islets on Pohnpei Island. The entire area protected by UNESCO as part of the Nan Madol World Heritage Site is about 18 square kilometers. This protected area includes the stone architecture that was built on a coral reef flat. Carbon dating has shown that the megalithic structures in Nan Madol were built in 1180 AD.

Nan Madol is located in the Federated States of Micronesia—which boasts some of the most beautiful islands in the Pacific—and the archaeological remains boast outstanding cultural value.

From the World Heritage inscription for Nan Madol:

Nan Madol is a series of more than 100 islets off the southeast coast of Pohnpei that was constructed with walls of basalt and coral boulders. These islets harbor the remains of stone palaces, temples, tombs and residential domains built between 1200 and 1500 CE. These ruins represent the ceremonial center of the Saudeleur dynasty, a vibrant period in Pacific Island culture. The huge scale of the edifices, their technical sophistication and the concentration of megalithic structures bear testimony to complex social and religious practices of the island societies of the period. The site was also inscribed on the List of World Heritage in Danger due to threats, notably the siltation of waterways that is contributing to the unchecked growth of mangroves and undermining existing edifices.

Nan Madol: Ceremonial Centre of Eastern Micronesia is an archaeological site located on the eastern shore of Pohnpei Island. The area is known as present-day Madolenihmw District. The entire city was constructed on a lagoon and is made of a series of small artificial islands. These islands are connected to each other through a network of canals. The core area of the UNESCO site Nan Madol is known for its stone walls and encloses a 1.5-kilometer long area. The site of Nan Madol is also bordered by tidal canals.

The name Nan Madol literally translates to “spaces between.” The name is derived from the canals that crisscross in between the ruins. This archaeological site has also earned the nickname as “Venice of the Pacific”.

Before 1628, Nan Madol was the capital of the Saudeleur Dynasty. There are about 25,000 people that inhabited the island of Pohnpei during this time. Little is known about the megalithic structures that is the center of the UNESCO site Nan Madol as of the moment. However, legends claim that the builders of the Leluh archaeological site in Kosrae moved to Pohnpei. Hence, they used the same skills they used to form those archaeological sites in Kosrae to build the Nan Madol complex. But recent studies show (and with the help of radiocarbon dating) that Nan Madol was built before Leluh. Hence, it is more likely that Leluh was influenced by Nan Madol rather than the other way around.

The center of the Nan Madol Complex served as the place of residence for the nobility. Meanwhile, mortuary activities were also conducted here with the help of priests. The ruling chief of the Saudeleur dynasty used Nan Madol as a means to organize and control anyone who could become his rival. He made them move to the city rather than live in their individual home districts wherein monitoring their activity would be more difficult. The political function of Nan Madol is, therefore, part of its cultural value.

Give yourself at least an hour, if not more, to explore the site. The location isn’t very visitor friendly. There is no visitor center and little to nothing in the way of interpretative material. If possible, hire a guide who can share some of the oral histories of the site.

The hard part about visiting Nan Madol is getting to the island of Pohnpei. Micronesia gets very few visitors as it is far away from any major population center, and there is only really one way to get to the island. The only way to get to the island is via the “island hopper” flight run by United Airlines. It starts in Honolulu and stops at islands in the Marshall Islands and Micronesia on the way to Guam three days a week. It alternates going Guam to Honolulu the other days of the week.

There are no major hotels or resorts on Pohnpei, so you will likely be staying in lodging which would be the equivalent of a 2-star hotel or a motel.

I arrived at the site by boat on a day-long boat tour of the Pohnpei lagoon. You can also arrive by car, but there is a hike involved to get from the road to the location. It’s approximately a 90-minute drive from the capital city of Palikir.

Expect to pay a few dollars as an entry fee.

Read Next: Travel Guide to Micronesia