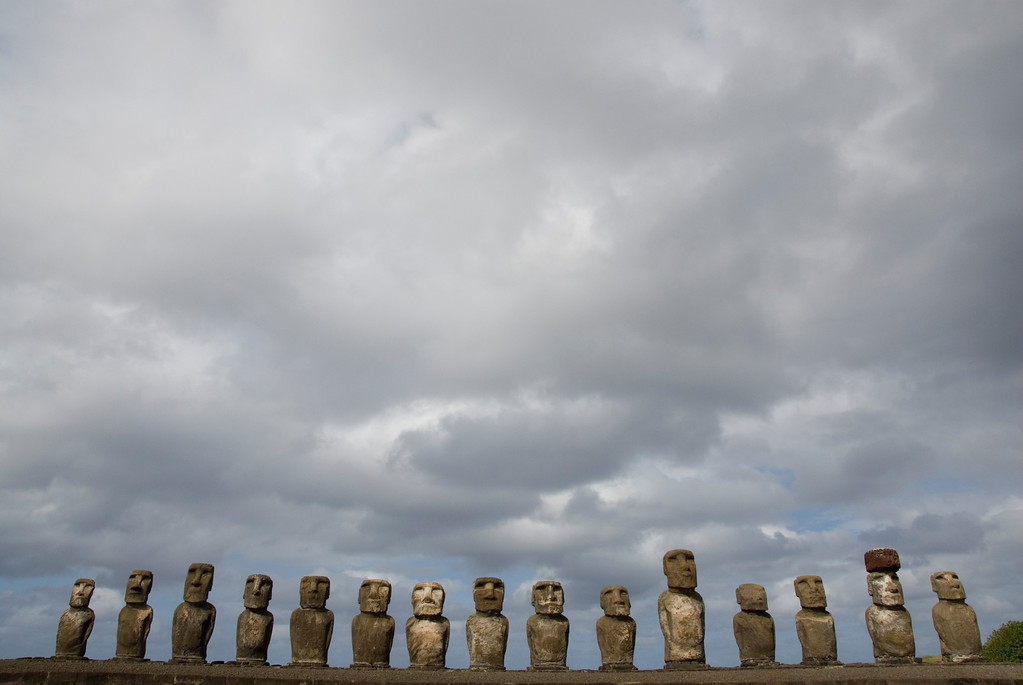 A Chilean territory with volcanoes, subtropical vegetation, and a surprising history, Easter Island is a fascinating place to explore. Tourism is the island’s largest source of income, and it largely sustains the livelihoods of those people living on Easter Island permanently—indigenous locals are called Rapa Nui.

Where is Easter Island located?

If that doesn’t make much sense to you, it’s located in the mid-Pacific Ocean. Many of the Pacific Islands are very remote, but I find this region of the world one of the most fascinating to visit. Even small islands are inhabited, and Easter Island is no different. Despite being located at the eastern edge of the Polynesian Triangle and a whopping 3,526 km from the nearest continental mass (the coast of Chile)—making it one of the most isolated human settlements in the world—people do live on Easter Island these days.

The island seems to have one leg in Polynesia and one in Latin America. Most residents are of Polynesian origin, but a few are clearly from the mainland (AKA, they’re of European origin).

Most signs are in Spanish, but some are in the local language, and as you wander, inhabitants talk in what is definitely “not Spanish.” The local culture is still alive and you can find signs offered in Spanish, English, and Rapa Nui.

Today’s Rapa Nui culture is very removed from the ancient culture and traditions that left behind the maoi, Easter Island’s most recognizable feature. The Rapa Nui people living on Easter Island arrived long, long before the outside world discovered them—scientists believe the island was first inhabited by seafaring immigrants from the Marquesas Islands in Polynesia some time between 400 and 1250 AD.

The Rapa Nui culture is much like many other Polynesian islands, but with a few distinct differences. The more than 900 massive statues, known as Moai, is just one of these differences.

Dutch explorers “discovered” the island in 1722 on Easter Sunday—hence the anglicized name—for what locals call the island of Rapa Nui (and what their ancestors may have called “Te Pito Kura”). Contact was light between those living on the island and outsiders until Peruvian slave traders arrived in the 1860s—the slave trade, coupled with smallpox, decimated the population of locals and caused the extinction of the written language on Easter Island, and eventually left just over 100 inhabitants still living.

Today, the people living on Easter Island are largely descendants of the ancient Rapa Nui (about 60%) and run the bulk of the tourism and conservation efforts on the island.

En route to Easter Island, I struggled with the complete lack of mental stimulation that comes from limited access to the internet, nothing whatsoever to read, no ability to talk to anyone in English, no TV, and no radio. I’ve filled my days writing blog posts, listening to my offline music, and playing chess: the only game that comes pre installed on Macs. (I haven’t played in years, but after embarrassing losses to the computer, I am up to speed in no time!)

Once I landed on Easter Island, I rented a car—the island is small, but not so small you could reasonably hike around it. I haven’t driven a stick in years, so it took a few minutes to get back into practice. It’s rainy on Easter Island—it’s rained on and off since I arrived, so I drove lap around the island in the afternoon to scope out a few sights, and understand more about this lightly inhabited island.

After dinner, the skies suddenly cleared up. Given that there is little civilization on Easter Island—and given its location in the ocean—there is as close to zero light pollution as you will find anywhere on Earth. It means travel photographers can have a heyday with night photography. It’s beautiful, but given we’re located in the Southern Hemisphere, I can recognize few constellations.

Intrigued by the island’s history? A Companion To Easter Island (Guide To Rapa Nui) is hands-down the best introduction for travelers and features incredible anecdotes about what it was like to live on the island in years past, long before mass tourism arrived on the island. It’s also the best paperback guidebook on the market.

The village of Hanga Roa is quaint, to say the least. It has a church, school, etc. just like any small village. But almost every building in town appears to be either a restaurant, souvenir shop, car rental, or guest house.

Only a handful of houses and storefronts do not deal directly with tourism. A decade ago, tourism generated 25% of Easter Island’s income. That number has simply soared since I visited in 2007. Everything on Easter Island seems oriented around tourism, and the number of tourists has now far eclipsed the levels the island can handle—it’s suffering from overtourism largely due to the increased number of flights, which makes the island more accessible than ever.

Many tourists travel from Latin America, which makes sense since Chile is the only country offering direct flights to Easter Island.

The other half of tourists venturing this far are mostly from the U.S. and the UK, with a few Japanese, French (from Tahiti), and “other” Europe. I encountered one guy the last two days at two separate maoi locations. He was Japanese and traveled  with an older film camera and a tripod. He had the patience of Job. He sat with his camera pointed at one statue for the entire time I was there (about an hour). I don’t know if he ever took a photo as he was waiting for the clouds and the light to shift just right.

For travelers, visiting the island, know that—like most islands in the world—things are not cheap. You’ll pay a premium, but the local seafood is top-notch, so you’re getting quality for the price.

Use our free Easter Island Travel Guide to plan your trip.

2 thoughts on “Life on Easter Island: The Most Isolated Human Settlement on Earth”