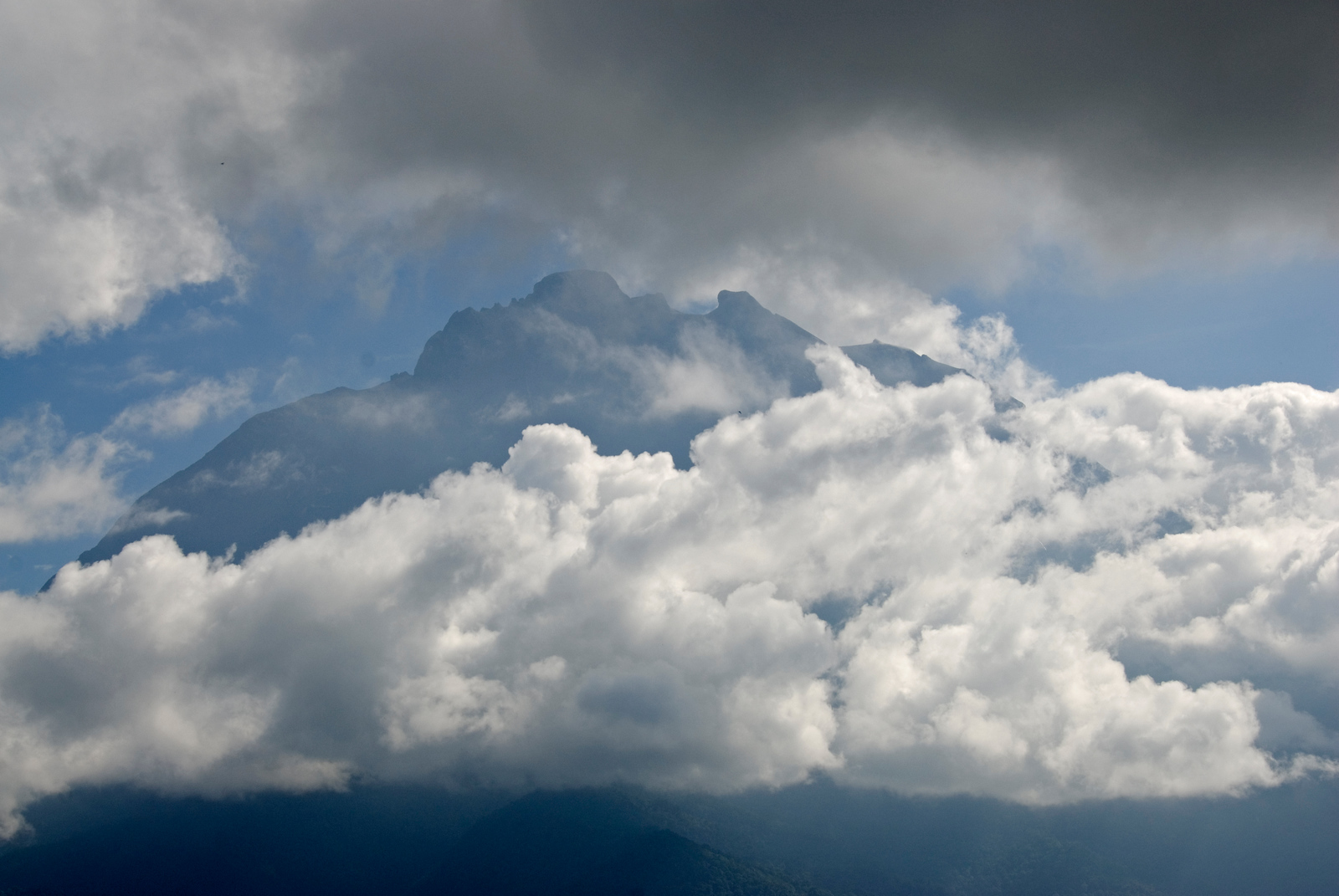 From the World Heritage inscription for Kinabalu National Park:

Located in the State of Sabah, Malaysia, on the northern end of the island of Borneo, Kinabalu Park World Heritage property covers 75,370 ha. Dominated by Mount Kinabalu (4,095m), the highest mountain between the Himalayas and New Guinea, it holds a distinctive position for the biota of Southeast Asia. Geologically, Kinabalu Park is a granite intrusion formed 15 million years ago and thrust upward one million years ago by tectonic movements and shaped by forces that continue to define its landscape. Despite its geological youth, it is exceptionally high in species with living relics of natural vegetation remaining, over 93% of the Park area.

The altitudinal range of the property, 152m – 4,095m, presents a wide array of habitats from rich tropical lowland and hill rainforest (35% of the park) to the tropical montane forest (37%), and sub-alpine forest and scrub at the highest elevations. Ultramafic (serpentine) rocks cover about 16% of the park and have vegetation specific to this substrate. The property has been identified as a Centre of Plant Diversity for Southeast Asia; it contains representatives from at least half of all Borneo’s plant species and is exceptionally rich in species with elements from the Himalayas, China, Australia, Malaysia, and pantropical floras. With records of half of all Borneo’s birds, mammals and amphibian species and two-thirds of all Bornean reptiles the property is both species-rich and an important center for endemism.

Kinabalu National Park is a magnificent mountain located near the northern coast of Borneo. The mountain can be climbed by non-technical climbers in a 2-3 day trek (although the record up the mountain is about 3 hours). You can also find a wide variety of unique plants in the park, including pitcher plants, the world smallest orchid, and the world’s largest flower: the six-foot Rafflesia. There are also hot springs and rainforest walks in the area around the mountain. The park is about an hour drive from the city of Kota Kinabalu.

The Kinabalu National Park is the first UNESCO World Heritage Site in Malaysia. It was designated as one in the year 2000 during the 24th session. It was listed under the Natural category.

Mount Kinabalu, also known as Gunung Kinabalu in Malay, is the focal feature of this national park. It is one of Southeast Asia’s highest peak at 4,095 meters in height. It belongs to Sabah, which dominates the state in every sense of the word. It is found in the state’s flag and is visible in almost every part of the island. For this reason, this national park is the biggest tourist destination in Sabah. Mount Kinabalu is noted as one of the youngest non-volcanic mountains in the world; it is believed to be around 10 to 35 million years old.

Kinabalu National Park is part of the Crocker Range on Sabah’s western coast. It is not the same and one with Crocker Range National Park, though. Sabah Parks is the name of the organization that is currently governing this park.

There are several types of accommodations found within the Kinabalu National Park, which are typically in the form of chalets. All accommodation bookings are processed through Sutera Sanctuary Lodges or Sutera Harbour, which is a privately owned company. All of those who are interested to climb the Kinabalu National Park are also assigned a qualified guide. In addition, hikers are also required to stay for at least one night in one of their accommodations.

For interested hikers, there are two trails to choose from Ranau Trail and Kota Belud Trail. The first step of the trail will take you to Panar Laban and then Sayat Sayat. At the next point of the summit, the trail is called Low’s Peak, which is at 4,095 meters. Some of the new trails will be more challenging than the old ones.

There are four climate zones in Kinabalu National Park: rich lowland forest, coniferous forests, alpine meadow zone, and summit zone. Because of this, there are a variety of flora and fauna species that live in the park.