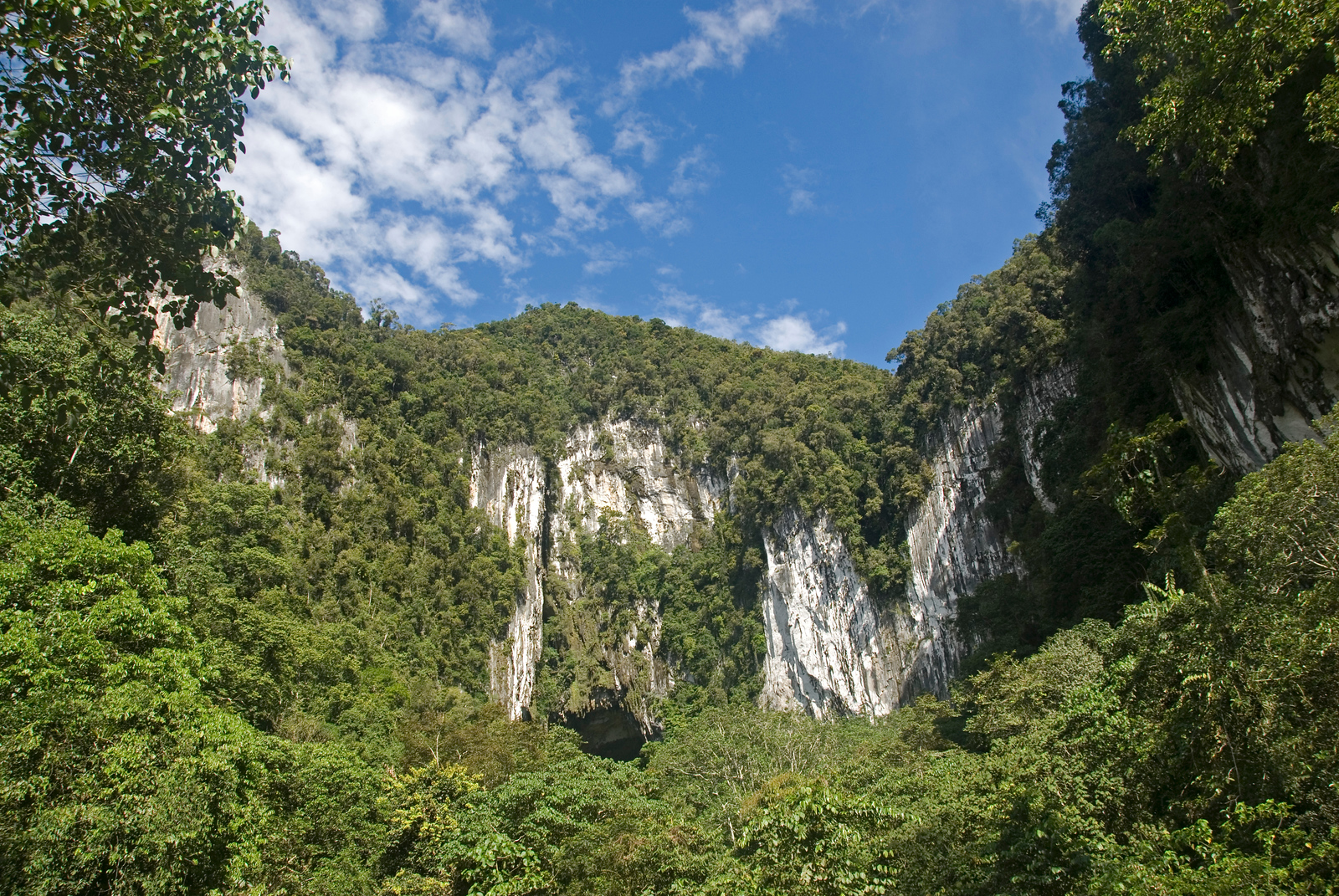 From the World Heritage inscription for Gunung Mulu National Park:

Gunung Mulu National Park, situated in the Malaysian State of Sarawak on the island of Borneo, is outstanding both for its high biodiversity and for its karst features. The park is dominated by Gunung Mulu, a 2,376 m-high sandstone pinnacle and the property is the most studied tropical karst area in the world. The geological Melinau Formation contains a remarkable concentration of caves, revealing a geological history of over more than 1.5 million years.

High in endemism, Gunung Mulu National Park provides significant natural habitat for a wide range of plant and animal species, both above and below ground. The 52,865 ha park contains seventeen vegetation zones, exhibiting some 3,500 species of vascular plants. Its palm species are exceptionally rich, with 109 species in twenty genera recorded, making it one of the worlds richest sites for palm species. Providing protection for a substantial area of Borneo’s primary tropical forest and a home for a high diversity of species, including many endemics and threatened species, the large cave passages and chambers provide a major wildlife spectacle in terms of millions of cave swiftlets and bats.

The property is home to one of the world’s finest examples of the collapse process in karstic terrain and provides outstanding scientific opportunities to study theories on the origins of cave faunas. The deeply-incised canyons, wild rivers, rainforest-covered mountains, spectacular limestone pinnacles, cave passages and decorations found on the property produce dramatic landscapes and breathtaking scenery that is without rival.

Important both for its high biodiversity and for its karst features, Gunung Mulu National Park, on the island of Borneo in the State of Sarawak, is the most studied tropical karst area in the world. The 52,864-ha park contains seventeen vegetation zones, exhibiting some 3,500 species of vascular plants. Its palm species are exceptionally rich, with 109 species in twenty genera noted. The park is dominated by Gunung Mulu, a 2,377 m-high sandstone pinnacle. At least 295 km of explored caves provide a spectacular sight and are home to millions of cave swiftlets and bats. The Sarawak Chamber, 600 m by 415 m and 80 m high, is the largest known cave chamber in the world.

Not much I can say about Mulu that I haven’t said before. It is the best national park I’ve experienced on my trip and probably one of the most underrated natural attractions on Earth. If you are in the region, take the time to visit Mulu.

The above photo is the entrance to Deer Cave and the Sarawak Chamber, the largest in the world. Each night millions of bats stream out to the rainforest to feed.

The Gunung Mulu National Park is a UNESCO World Heritage Site that was inscribed in 2000. It is a national park located in Sarawak, Malaysia. The park is considered as one of Asia’s most unique and thrilling nature destinations. It encompasses the various caves and karst formations within a mountainous, rainforest and equatorial setting.

The entire area covered by the park measures at more than 528 square kilometers. And yet, there is no other national park in the world that covers as many natural marvels as this park does. For this reason, there have been many expeditions mounted to explore the natural beauty and biodiversity of this national park.

The Gunung Mulu National Park is named after Mount Mulu, which is Sarawak’s second-highest peak.

There are various transportation options available for anyone planning to visit Gunung Mulu. First off, you can take a flight from Miri to Mulu. Malaysia Airlines operate daily so you can travel to Mulu via a 30-minute flight.

To get to the park, you must travel by boat for three hours from Kuala Baram to Marudi. Then, you will take another commercial express boat to either Long Panai or Kuala Apoh. You will be traveling along the Tutoh River, which is a tributary of the Baram River.

The limestone karst formations are the primary attraction in the Gunung Mulu National Park. Within these formations are enormous caves, rock pinnacles, rock cliffs, gorges and extensive cave networks. Another notable feature in the park is Mount Mulu. This is a sandstone mountain with a height of 2,376 meters.

The Gunung Mulu National Park is recognized as the world’s largest known natural chamber. The cave stretches to 700 meters in length with a height of 70 meters. Many claim that the size of the chamber is equal to 40 Boeing 707s!

Caves are therefore one of the most prominent sights explored by tourists who visit this national park. Among the caves that are found within the park, premises are Benart Cavern, Clearwater Cave (8th longest cave in the world as 2014), and the Cave of the Winds. Aside from the caves, the limestones found within the area are also a center of geological studies. Many researchers estimate the rocks found in the park to be around 90 million years of age.

Aside from the limestone karst formations, the rich flora and fauna in the Gunung Mulu National Park are also one of the biggest draws for tourists. According to research, there are about 90 species of hornbill, 27 species of bat, and various mammals including gibbons, squirrels, shrews, bearded pig, Bornean tarsier, small barking deer, mouse deer, and the long-tailed macaque that live within the caves and the park premises.

Meanwhile, the plant species in the Gunung Mulu National Park are just as diverse. Within the forest live flowering plants, trees, and fungi. The variety in soil types, geology and topography have made it possible for various plant species to thrive.