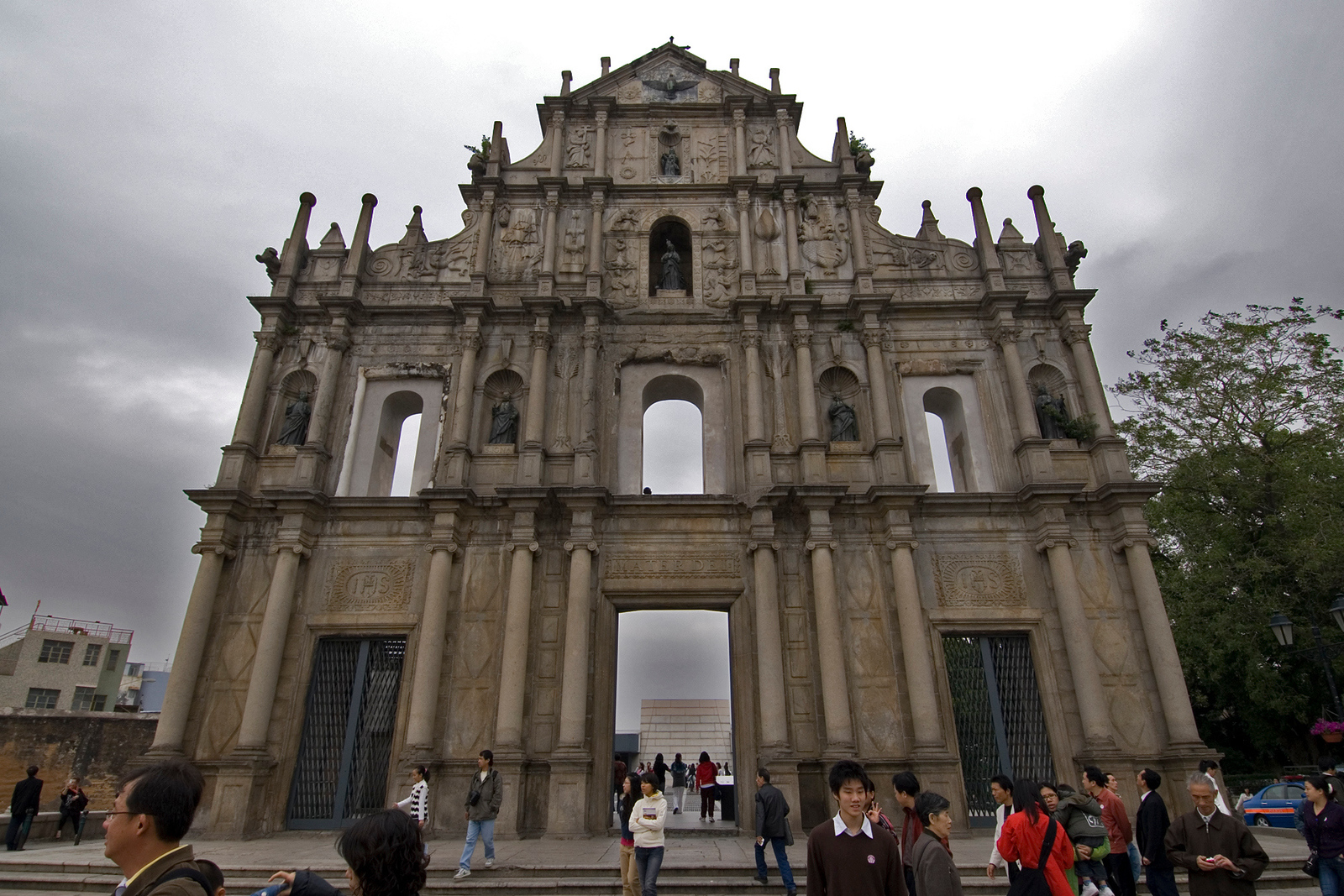 From the World Heritage Inscription for the Historic Center of Macau:

Macao, a lucrative port of strategic importance in the development of international trade in Chinese territory, became a Portuguese settlement in the mid-16th century and returned to Chinese sovereignty in 1999. The inscribed property presents a group of 22 principal buildings and public spaces that enable a clear understanding of the structure of the old trading port city. With its historic streets, residential, religious and public Portuguese and Chinese buildings, the Historic Centre of Macao provides a unique testimony to the meeting of aesthetic, cultural, religious, architectural and technological influences from East and West. It bears witness to the first and most enduring encounter between China and the West, based on the vibrancy of international trade. As a gateway between China and the western world, Macao played a strategic role in world trade. Different nationalities settled in this hub of a complex maritime trading network, along with missionaries who brought with them religious and cultural influences, as illustrated by the introduction of foreign building types (China’s first western-style theater, university, hospital, churches, and fortresses), many still in use. Macao’s unique multicultural identity can be read in the dynamic presence of Western and Chinese architectural heritage standing side by side in the city and the same dynamics often exist in individual building designs, adapting Chinese design features in western style buildings and vice versa, such as the incorporation of Chinese characters as decorative ornaments on the baroque-mannerist church façade of St. Paul’s Ruins. Typical European port city characteristics can also be seen in the urban fabric structure of the settlement with public squares blending into the densely packed lots along narrow, meandering streets, whilst accumulating experiences from other Portuguese settlements, seen in the concept of “Rua Direita” that links the port with the old citadel. Visual connections between the property and seascape are attributes that reflect Macao’s origin as a trading port city; the Inner Harbour used over centuries and still functioning today adds to that testimony. Intangible influences of the historic encounter have permeated the lifestyles of the local people, affecting religion, education, medicine, charities, language, and cuisine. The core value of the historic center is not solely its architecture, the urban structure, the people or their customs, but a mixture of all these. The coexistence of cultural sediments of eastern and western origin, along with their living traditions, defines the essence of the historic center.

If you are ever in Hong Kong, take a day to go and visit the Historic Center of Macau. It is to Portugal what Hong Kong was the British. It is less than an hour away by high-speed ferry, and there are boats leaving all the time. Modern Macau is the Asian Las Vegas, with many of the large Vegas hotels also now in Macau: MGM Grand, Sands, Wynn and the Venetian.

The Historic Center of Macau is the old city set up by the Portuguese. The featured attraction is the facade of St. Paul’s Church which burned down in the 19th Century. There are also other historic buildings in the area, all within walking distance.

I visited Macau on Christmas day 2007 and got to taste Chinese treats such as pork floss and Portuguese items like egg custard.

The historic center of Macau was inscribed into the UNESCO World Heritage Sites list in 2005. It is a unique destination in Asia which also makes it a popular tourist attraction for its East-Meets-West culture.

It is one of over 20 locations that exhibit the unique co-existence of two contrasting cultures: Chinese and Portuguese. It is evident in a wide range of aspects involving Macau’s identity: from its history, architecture, religion, and technology, among other things. Macau is a part of China and it was once a Portuguese colony; hence, this explains the melding of two different cultures into one.

During the mid-16th century, Portuguese explorers began to arrive in the southwest area of Macau to settle or trade. During this time, Macau was developing as the main port in China that was open for the rest of the world. Macau was also considered one of the most important international ports in Asia at that time.

This facilitated in the growth of trading in Macau before the 19th century. It has also made it possible for people from various parts of the world to travel and settle in Macau. The Portuguese were among those who have settled in Macau and engaged in trading activity. As the Portuguese settled here, they have brought in influences when it comes to social customs, religion, and also built houses, churches, and streets. This area where most of these Portuguese-influenced structures were built on forms the core of the Historic Center of Macau, which is recognized by UNESCO as an important cultural site.

This went on for another 400 years, which explains how deeply embedded the Portuguese influence has been to the culture in Macau. In the Historic Center of Macau, you will find one of the best-preserved western-style buildings in all of China.

Highlights of the Historic Center of Macau

Below are some of the most notable structures and buildings within the Historic Center of Macau:

Below are some other structures or sites that are worth checking out within the Historic Center of Macau:

4 thoughts on “Historic Center of Macau”