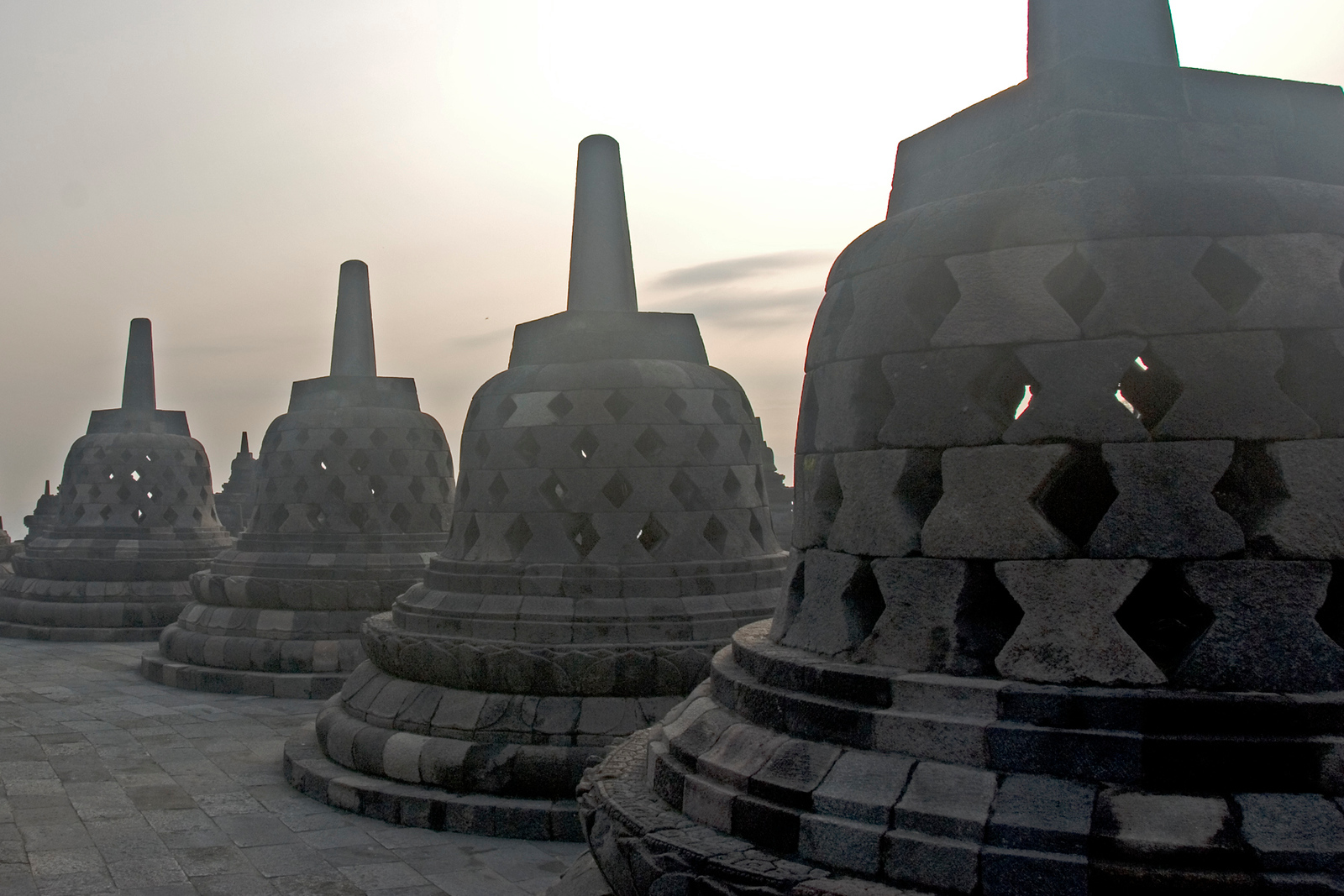 From the World Heritage inscription for the Borobudur Temple Compounds:

The Borobudur Temple Compounds is one of the greatest Buddhist monuments in the world and was built in the 8th and 9th centuries AD during the reign of the Syailendra Dynasty. The monument is located in the Kedu Valley, in the southern part of Central Java, at the center of the island of Java, Indonesia.

The main temple is a stupa built in three tiers around a hill which were a natural center: a pyramidal base with five concentric square terraces, the trunk of a cone with three circular platforms and, at the top, a monumental stupa. The walls and balustrades are decorated with fine low reliefs, covering a total surface area of 2,520 m2. Around the circular platforms are 72 openwork stupas, each containing a statue of the Buddha.

The vertical division of Borobudur Temple into base, body, and superstructure perfectly accords with the conception of the Universe in Buddhist cosmology. It is believed that the universe is divided into three superimposing spheres, kamadhatu, rupadhatu, and arupadhatu, representing respectively the sphere of desires where we are bound to our desires, the sphere of forms where we abandon our desires but are still bound to name and form, and the sphere of formlessness where there is no longer either name or form. At Borobudur Temple, the kamadhatu is represented by the base, the rupadhatu by the five square terraces, and the arupadhatu by the three circular platforms as well as the big stupa. The whole structure shows a unique blending of the very central ideas of ancestor worship, related to the idea of a terraced mountain, combined with the Buddhist concept of attaining Nirvana.

The Temple should also be seen as an outstanding dynastic monument of the Syailendra Dynasty that ruled Java for around five centuries until the 10th century.

The Borobudur Temple Compounds consists of three monuments: namely the Borobudur Temple and two smaller temples situated to the east on a straight axis to Borobudur. The two temples are Mendut Temple, whose depiction of Buddha is represented by a formidable monolith accompanied by two Bodhisattvas, and Pawon Temple, a smaller temple whose inner space does not reveal which deity might have been the object of worship. Those three monuments represent phases in the attainment of Nirvana.

The temple was used as a Buddhist temple from its construction until sometime between the 10th and 15th centuries when it was abandoned. Since its re-discovery in the 19th century and restoration in the 20th century, it has been brought back into a Buddhist archaeological site.

The Borobudur Temple Compounds are one of the top cultural attractions in South East Asia. The temple is the largest single Buddhist temple in the world. Lost to most of the world for several hundred years, it was buried by volcanic ash and jungle until the early 20th Century. In the last several decades, the Indonesian government has made the restoration of Borobudur a top cultural priority.

Borobudur is an easy drive from Yogjakarta and it can easily be visited in a morning or afternoon or visited in conjunction with nearby Prambanan.

During my visit to Borobudur, I had the pleasure of meeting an Indonesian English class which was visiting to practise their English with tourists. Everyone was interested in Barak Obama, who had spent a few years in Indonesia.

If you visit Bali, a side trip to Yogyakarta is well worth the time.

The Borobodur Temple Compounds is a 9th-century Buddhist temple complex. The structures are built on a hill using several different levels of land. From afar, the Borobodur looks like a single large stupa. But when viewed from above, it looks like a giant tantric Buddhist mandala. Hence, the design of the temple masterfully combines the principles of Buddhist cosmology and that of nature.

The temple was rediscovered in the 19th century and underwent restoration in the 20th century. In fact, UNESCO funded the major renovation process for the temple compound in 1973. There are two other smaller temples that are encompassed within this heritage area: Pawan and Mendut Temples. Both temples are Buddhist temples.

Here are a few things you need to know about the Borobodur Temple Compounds:

There are several ways to travel to Borobodur Temple Compounds in Central Java, Indonesia. The most common jump off point is in Yogyakarta, which is approximately an hour’s drive away. You can hire a car or take the public bus to get to the temples.

Bonus Tip: You should visit during sunrise or sunset since you can get the best views (and photos!) of the temple. Also, you should avoid visiting on weekends to avoid the crowd.

Since it was restored, the Borobudur Temple Compounds has been named as one of the UNESCO World Heritage Sites in Indonesia in 1991. Since then, it has become a major tourist destination in the country. The temple consists of over 2,600 relief panels and more than 500 statues of Buddha. There also detailed wall carvings all throughout the temples.

There are six square platforms that make up the Borobudur Temple Compounds. Each square platform is topped by three circular platforms. At the center of the top platform is the main dome; it is surrounded by 72 Buddha statues. The wall reliefs recount the life of Buddha by depicting his journey towards finding the ultimate truth.