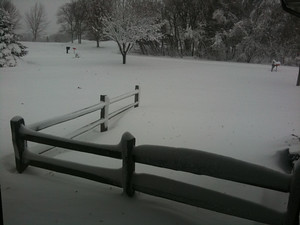 All the crap you hear about a white christmas and freshly fallen snow is totally bunk. The temperature here has been in the single digits fahrenheit (-13C), the sun sets a little after 4pm, and there is over a foot of snow. It has been below freezing now for over two weeks and it probably wont get over freezing again for another three months. All the cars create a black slush that stains anything it touches, so if you walk you have to make sure to avoid stepping or touching the slush.

..and did I also mention that it gets dark really, really early?

I was born in the wrong part of the world. I can’t stand the winter.

I am counting down the days until I can hit the road again. My current plans are to be in Los Angles sometime around the first week on January, then fly to Fiji via Hawaii or directly from LA. I don’t know yet. Then I’ll head to Thailand where I’m going to get an apartment for two months and work. I will probably take a side trip to Burma while I’m there. The plan as of now (and it might change) will be to go to Panama or Colombia in April.

I’ve spent much of my time during the last several weeks doing a lot of thinking about my site and where I want to take it. I’ve been clarifying exactly what I want to produce, what areas I’ve been lax in, and what changes I need to make. I’ll be making a much longer post about this next week, but it has been a productive exercise. I’ve been working on new and better ways to integrate photos, layout articles, and make what I do more engaging than just making the same old blog posts.

That being said, I’m getting antsy. I can’t wait to make my return to Fiji. My time there was one of the best I’ve ever had traveling. I’m looking forward to going back and taking photos with 2.5 years more experience. I have very few photos of Fiji and that is something I want to rectify. I also want to do some video stories of the interesting things I found on the islands.

Likewise, I can’t wait to get to Thailand and eat street food.

I’m going to be entering a new phase of my travels. I’ll be moving much slower and deliberate, and I hope the quality of what I produce will correspondingly increase.