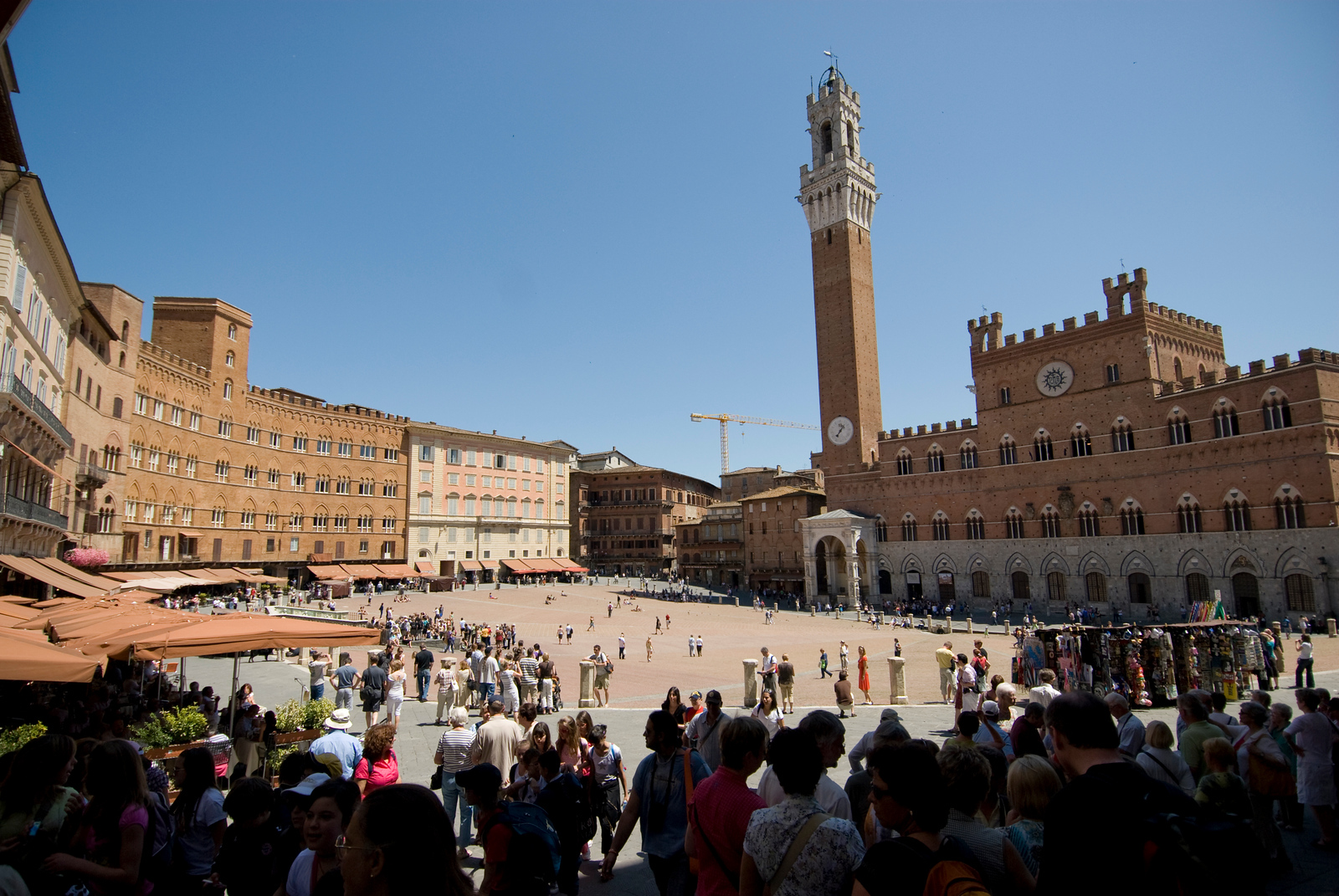 From the World Heritage inscription for the Historic Center of Siena:

Siena is the embodiment of a medieval city. Its inhabitants pursued their rivalry with Florence right into the area of urban planning. Throughout the centuries, they preserved their city’s Gothic appearance, acquired between the 12th and 15th centuries. During this period the work of Duccio, the Lorenzetti brothers, and Simone Martini were to influence the course of Italian and, more broadly, European art. The whole city of Siena, built around the Piazza del Campo, was devised as a work of art that blends into the surrounding landscape.

Siena is an easy train ride from Florence. I spent the day there taking photos and strolling around the city. While it is definitely touristy, it is a far cry from the tourist levels you will see in Florence or Venice. In addition to the center of town, the cathedral and side streets are also worth exploring.

Siena is a city belonging to the Tuscany province of Italy. It is also the capital of the Siena province.

The historic center of Siena is recognized by UNESCO as an important cultural heritage property. Hence, it was added to the list of UNESCO World Heritage Sites in Italy in 1995. The historic center is not only recognized for its cultural value but also a notable tourist attraction. In fact, it is one of the most visited tourist destinations in Italy with more than 163,000 international visitors in 2008. It is a city famous for its medieval cityscape, cuisine, museum, and arts.

The Historic Center of Siena is located the heart of Tuscany and is surrounded by several other top destinations in Italy such as Pisa and Florence. Hence, it is easy to get to Siena for those who would like to explore this UNESCO property.

If you are coming from outside Italy, you need to take a flight to Aeroporto di Firenze in Florence or Galileo Galilei Pisa Airport. From the airport, you can take a bus or coach transfer service to the nearest train station with a route to Siena.

If you travel by train, you can do so from Rome, Pisa or Florence. But if you want a more convenient ride, you can choose to travel by bus since the train station in Siena is located 2 kilometers outside of town. Hence, it will take some more travel from the train station to get to the historic center of Siena.

If you plan on taking your own car, you need to know that the historic center of Siena is a car-free zone. Therefore, cars are not permitted in this part of town.

About the Historic Center of Siena

The historic center of Siena is known for its culture and arts. It is also known as a university city and is popular for its cuisine. Its location is the primary reason for its popularity; being located amidst the Tuscan hills, you can get spectacular landscape views.

Cliché as it is, the Siena that is frequented by tourists now seemed to have stopped its time. It feels like walking into a time machine and going back to the 13th century, a time when Siena flourished. This is also part of the reason why UNESCO recognized it as a world heritage site since it was able to preserve its heritage and cultural identity.

According to the UNESCO listing, Siena is the perfect “embodiment of a medieval city”. During the height of its success, it competed with neighboring cities such as Florence and Pisa in terms of urban planning. Over several centuries, Siena has retained its Gothic appearance from the 12th and 15th centuries. Indeed, the works of the Lorenzetti brothers, Simone Martini and other notable artists within the town of Siena were highly prominent in the city. In fact, these works of architecture not only shaped Siena’s identity as they blended in with the surrounding landscape but also influenced much of Italian architecture, as well as the rest of Europe.

The historic center of Siena features a distinctive Gothic style with a notable Sienese arch to it, due to the influence from the Crusaders. Eventually, the Sienese arch was evident in the town planning and architecture that were developed during the Renaissance era. To this day, the medieval character and distinctive style of Siena is still evident. It was undeniable the kind of impact that Siena had during the Middle Ages in terms of how other Italian cities approach art, architecture and town planning. For this reason, history buff tourists will be in awe at how visiting Siena would make you feel like going back into time.

2 thoughts on “Historic Center of Siena”