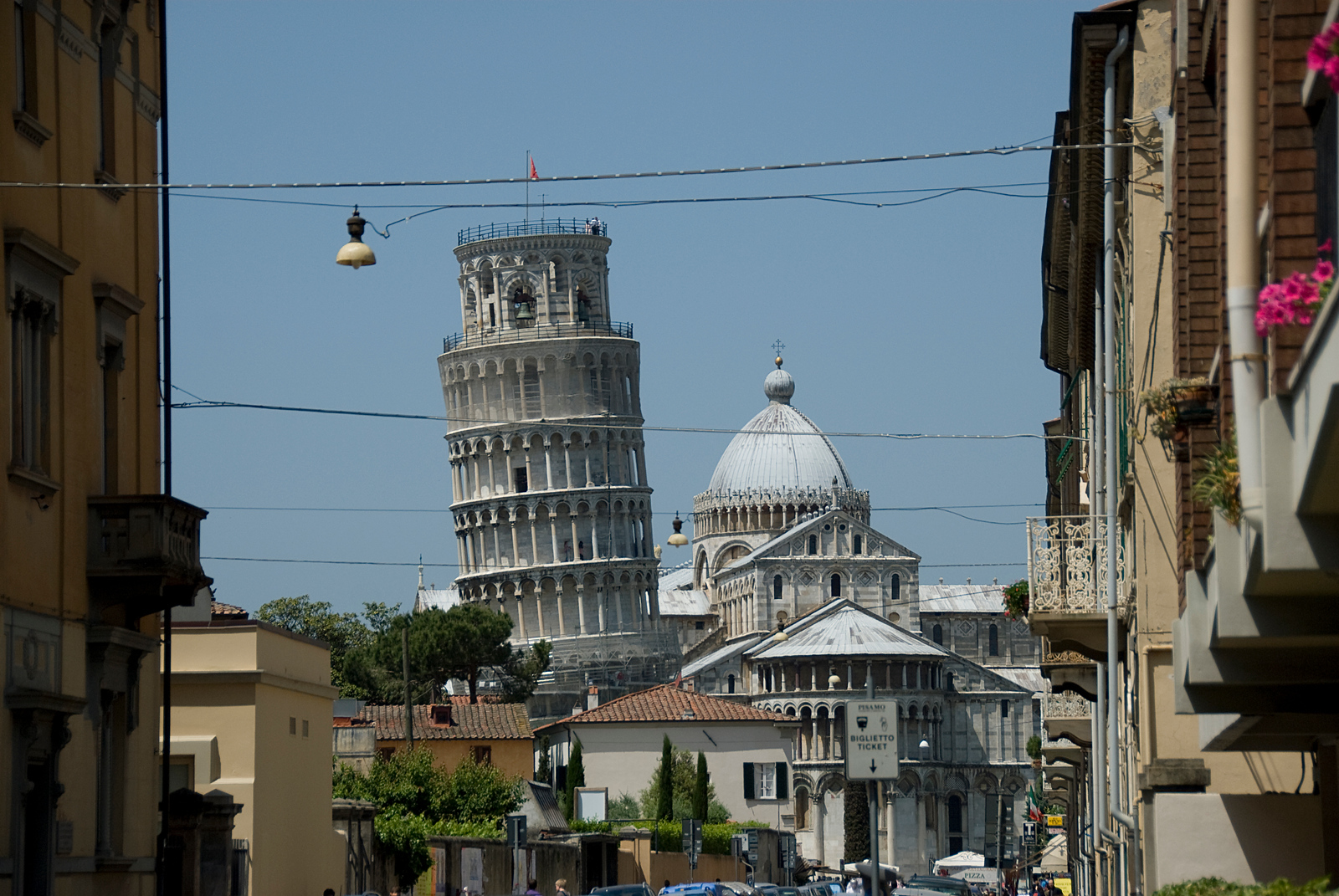 From the World Heritage inscription for the Piazza del Duomo, Pisa:

Standing in a large green expanse, Piazza del Duomo houses a group of monuments known the world over. These four masterpieces of medieval architecture – the cathedral, the baptistry, the campanile (the ‘Leaning Tower’) and the cemetery – had a great influence on monumental art in Italy from the 11th to the 14th century.

Most people have heard of the Leaning Tower of Pisa, but most people have no idea of the context of the tower. It is actually just the bell tower for the Pisa Cathedral. The entire cathedral complex is as impressive as the tower. The cathedral is a mishmash of old bricks from previous buildings and has strong Arab influences. The best part of going to Pisa, however, is watching tourists take photos of themselves trying to hold up the tower.

The Piazza del Duomo in Pisa is one of Italy’s UNESCO World Heritage Sites. It is located in Pisa within the province of Tuscany and was inscribed in 1987. The monumental cathedral and leaning tower of Pisa is famous worldwide. Hence, it does not come as a surprise that UNESCO listed it as a World Heritage Site. It served an important purpose in the ancient world as a civic center; to this day though, it continues to be an important part of Pisa and is also one of Tuscany’s most famous tourist destinations.

The Duomo is also known as Piazza dei Miracoli or Piazza of Miracles. It is unique from all other piazzas in Italy because it is not paved but rather consists of a grassy field that is dominated by three of the city’s most monumental architectural features: 1) Pisa Cathedral, 2) baptistery and 3) campanile. You will learn more about the history and function of these three structures below.

The Piazza del Duomo, Pisa is a unique attraction in Italy as it is home to four grandiose Medieval architectural structures. In fact, the architectural style is so unique that it gave birth to a new style called “Pisan Romanesque” architecture. Historically, the cathedral complex is located near a river port. The central location was specifically the location and was used to showcase the grandeur of Pisa during the epoch in which it was built and founded.

The whiter-than-white structures are recognized for their unique beauty and style. The Cathedral is made up of five naves with a transept and is surrounded by a splendid dome. Meanwhile, both the lateral sections of the cathedral’s façade feature elaborate decorations made out of marble. In the panels of the cathedral, there are some Arab influences that were interspersed here and there.

One structure that is also located within the property of Piazza del Duomo is The Camposanto. However, this structure got damaged during World War II. It offers a picturesque scene and is located right across the Piazza. The site is actually a cemetery but the beauty of the structure is undeniable and the architecture impressive.

The UNESCO site of Piazza del Duomo, Pisa consists of three important and culturally valuable architectural structures. You can learn more about each structure below:

The leaning tower of Pisa is the most notable structure within the Piazza del Duomo, Pisa. It is also one of the most visited by tourists who like to take the famous shot of the leaning tower. It is a freestanding bell tower that stands behind the Duomo. It is also the third oldest building within the Piazza. The tower started to lean soon after it was constructed in 1173. The tower took 199 years until its completion.

The Duomo is located at the heart of the piazza. It is a medieval cathedral that was designed by architect Buscheto. The Duomo was constructed in 1063 but was completed by the 13th century. Even though the tower is most notably known for its learning structure, this cathedral is also actually tilted. However, the tilt is not as noticeable as in the tower.

This Romanesque building within Piazza del Duomo, Pisa is the work of architect Diotisalvi. It was constructed in the mid-12th century and was completed by the 14th century. The Baptistery is the largest of its kind in Italy and was dedicated to St. John the Baptist.