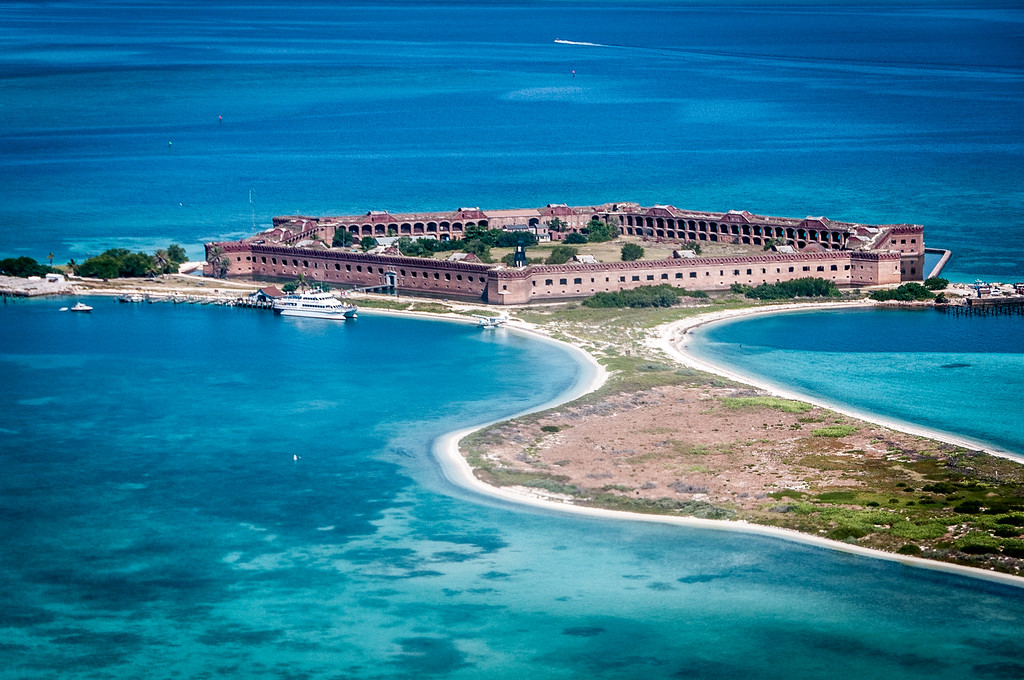 Dry Tortugas National Park is one of the least-visited, but surely one of the most unique, gems in the U.S. National Park tiara. For most, the highlight is a massive sentinel red brick redoubt, Fort Jefferson, that stands resolute and in stark contrast to the bright blue skies and crystalline Gulf of Mexico waters that surround it. 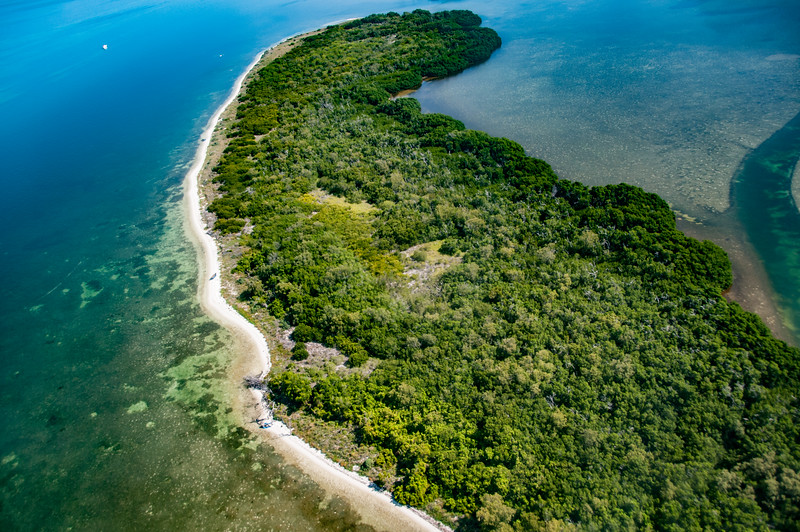 Visiting the Dry Tortugas on a Day Trip

The 100-square mile Dry Tortugas National Park as a whole is 98% water so the primary ways to access the fort are either via float plane or the more accessible Yankee Freedom III ferry from Key West. Experienced sailors can pilot their own vessels there too, or you could charter a boat. The ferry crosses the 70 miles to Fort Jefferson in just over two hours. During that time, a simple but hearty breakfast is served, and a guide preps the passengers with a history of the park’s evolution, from fort constructed between 1846 to 1875 to designation as a national park in 1992.

For most of the ferry ride, you can see a 360-degree view of ocean all the way to the horizon. If you’re lucky, you might be treated to sightings of dolphins, floating turtles, or other sea life. There’s notable excitement among the passengers when the massive, six-sided, two-story fort—which is made of 16 million bricks and is noted as the largest masonry building in the western hemisphere—comes into view.

The only land in the park is comprised of seven islands, the largest of which is Garden Key, some 70% of which is now consumed by Fort Jefferson. Ponce de Leon discovered these islands in 1513 and found them to be full of turtles, which at the time were an excellent, and self-replenishing, food source. They jotted ‘Las Tortugas’ on their maps to let future Spaniards know that these islands were that period’s equivalent of a modern fast-food drive-through. Later, British sailors found the islands but noted that there was no freshwater to be had. So, they added the word ‘dry’ to give the area its unique, multi-lingual name.

Catching the Ferry from Key West

The ferry boards at 7:00 a.m. and returns to Key West at 5:15 p.m. Be sure to pack some diversions for your kids for the rides out and back. Our teens enjoyed playing a collaborative word game on a tablet, and we brought along a deck of cards as well. Note too that, assuming there are no issues with the passage out or back, you’ll only have about five hours to spend in the actual park. Be sure to make the most of your time!

Pro Travel Tip: Have one of your party arrive early at the ferry to reserve your spot in line as seating is “first come, first served,” and the best seats go quickly

Touring the Dry Tortugas on a Day Trip

Once the Yankee Freedom III docks at Fort Jefferson, you have the option of joining a presentation by their guide. The ferry company offers an optional, short initial introduction to the island that’s a brisk 15 minutes. Our particular guide was excellent, being impassioned, very knowledgeable, and entertaining (even still our kids were bored by the presentation). You then have the option to join the guide on an extended tour of the fort itself, which lasts another 30 minutes.

The fort is clearly a marvel of early logistics, as well as engineering. It was designed to be a massive gun platform, bristling with 420 cannons. Each of the 16 million bricks had to be shipped to the island, first from Pensacola and then, during the Civil War, all the way from Maine! Granite stones for staircases, iron ‘Totten’ shutters and curved tracks that supported the cannon, mountains of mortar, and everything that the workers needed to survive, including fresh water, had to be shipped in.

While the fort never fired a shot in anger (it was actually never entirely finished—nor fully armed), its very presence may have been enough to deter both pirates and foreign governments from trying to restrict the prosperous Gulf shipping lanes that it guarded. The fort itself wasn’t the only deterrent, as it also watched over an excellent, deep-water harbor. While bandits or foreign navies might have been able to sail outside the range of the fort’s many guns, they couldn’t avoid the U.S. Naval ships that would harbor, refit, and resupply here.

The fort is a delightful maze of spiral staircases, gun emplacements, and instructional interpretive signage and displays that any history buff will eat up. While care must be taken on the sometimes uneven or even crumbling infrastructure (which may be a challenge to anyone with mobility issues), a view from the grassy top of the structure is not to be missed. Care must be taken on any of the upper levels, as there are no railings to prevent falls and the compounding effects of time, the sea air, and natural erosion have made many of the bricks quite loose. Absolutely keep a close eye on small kids.

As you look out over the expansive parade ground, barracks ruins, and remaining structures, it’s easy for your mind to wander back into time and contemplate the spartan life of a soldier, laborer, or slave here. Untainted fresh water and good food was always in short supply while heat, humidity, mosquitos, and utter boredom were not. Scurvy was always a threat as was the dreaded Yellow Fever, on occasion. The fort’s population peaked at about 2,000 inhabitants, including more than 1,700 military personnel as well as officers’ families, laundresses, lighthouse keepers, a doctor, cooks, and other support staff.

During the Civil War, while the Confederacy claimed the northern, populated, parts of Florida, the Union maintained its presence at Fort Jefferson (and in Key West as well). Throughout the conflict, northern warships used the fort’s harbor as they ran missions to maintain the blockade against the South. The isolated fortress was also used as a prison. It primarily housed Union deserters but its most famous resident was Dr. Samuel Mudd, who notoriously aided John Wilkes Booth by giving him medical attention for a broken leg after he had assassinated President Lincoln.

The military eventually abandoned the brick behemoth in 1874 but it was used as a coaling station for ships of the line for some time after. Fort Jefferson was actually the last stop of the USS Maine before it sailed on to Havana, Cuba and its explosive end there.

Snorkeling in the Dry Tortugas

Once you’ve had your fill of the island’s history, it’s a good time to head back to the ferry for another simple but hearty meal at lunchtime. Then, it’s time to get into the water. Passage on the Yankee Freedom III includes the use of their own snorkel gear—and the snorkeling in the Dry Tortugas is fabulous. Among the national park’s coral reef and sea grasses, you might spot brilliant yellow Smallmouth Grunts, gray Angelfish, a variety of Groupers, Stoplight Parrotfish, and the appropriately named Sergeant Major fish.

The fort is surrounded by a moat wall, which offers the rare opportunity for those who aren’t snorkeling to accompany those who are. While my daughters delighted in spotting fish and my wife motored along in the water, determined to circumnavigate the entire structure, I strolled along next to them, happy to stay dry while snapping photos of both my family and the fort as I moseyed along the wall. 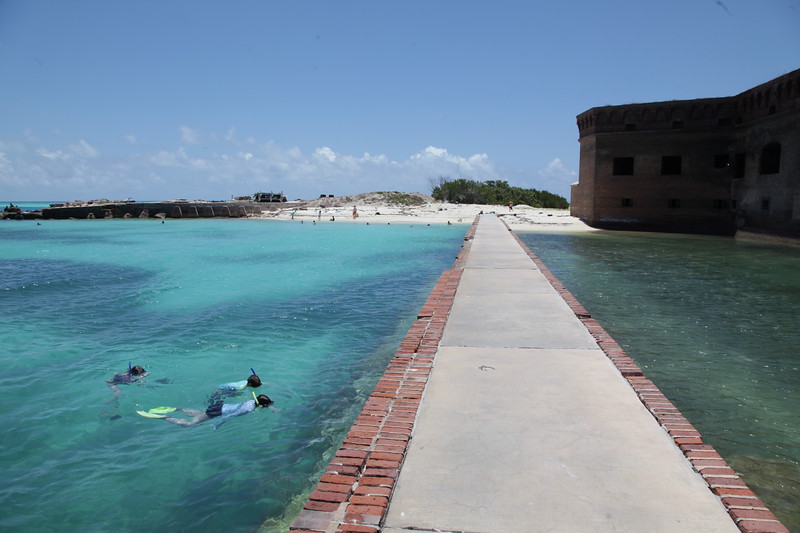 Wildlife above water includes Sooty Terns (sometimes in masses), whose only regular nesting site in the entire U.S. is on nearby Bush Key, various Noodies, and magnificent Frigatebirds. Five turtle species visit Dry Tortugas, including Loggerheads and Leatherbacks. The turtles nest on Bush Key, which is often cordoned off from visitors during the nesting season.

How do You Get to the Dry Tortugas?

Dry Tortugas National Park is located in the Florida Keys, off the coast of Key West. While the booking a day trip via the catamaran ferry is the most convenient, accessible, and the most affordable option to get to Dry Tortugas on a day trip (adult tickets are $180, children 4-16 are $125), it does limit your time there and those five hours go quickly. The return trip to Key West is a great opportunity to unwind as you might play board games, read, enjoy the ocean, or have a cocktail.

By contrast, the transit with Key West Seaplane Adventures lasts only 45 minutes and provides about six-and-a-half hours on the island—it also offers beautiful views when landing. Cost for a full day is $625, or $500 for children 12 and under, and while snorkeling gear is included, meals are not.

Camping is allowed on the island, but space is very limited—and is reserved well in advance. There are only eight camping spots, one group spot, and a small ‘overflow’ area. It is primitive camping (so bring everything—including your own water) and you must take the ferry as the weight of the gear is problematic for the sea planes (note too that ferry check in for campers is an hour earlier, at 6 a.m.) It is recommended that you inquire about eight to twelve months in advance to check camping availability and attempt to make a reservation. If you can snag a spot though, you’ll be one of the few people inhabiting Dry Tortugas National Park that night, as the only overnight guests are campers, boaters staying on their vessels, and a handful of park rangers.

However you get there and however long you might stay, be sure to put fascinating and truly unique Dry Tortugas National Park on your ‘must see’ list for your future travels!

Chez’ is a travel writer, tourism consultant and 15-year veteran of the travel industry. He focuses on adventure travel and family travel. He’s lived all over the U.S. and traveled to some 35 countries but has the most fun when he’s exploring with his wife and two daughters. His works have appeared in the Los Angeles Times, Good Housekeeping, Rachel Ray Every Day, Family Fun, Fatherly, Yahoo Travel, Family Vacation Critic, Elevation Outdoors, Everett Potter’s Travel Report, TheFamilyBackpack.com, CincinnatiRefined.com, Greenmatters.com, WorldFootprints.com, Mountain Gazette, TheActiveTimes.com, BoundRound.com (Australia), Family Travel (Australia), and Twist Travel Magazine. He also does regular travel segments for the morning show of his local FOX affiliate. You can find him online at Chez Connects, and on Instagram and on Twitter.