No one knew what to expect in Western Sahara. Last year, the West Africa trip ended in Senegal, so even the staff didn’t know what to expect. It isn’t a place that most people even know about, and the name doesn’t really lend itself to much more than sand.

Before I get into the details of what we did, however, I think a bit of backstory about Western Sahara is in order.

Western Sahara was formerly known as the Spanish Sahara until 1975 when the Spanish pulled out. After the Spanish left, Morocco and Mauritania both claimed the territory and they both fought the locals of that region which called themselves the Polisario Front. The UN negotiated a cease fire in 1991 and since then Morocco has controlled most of the region, including all of the coastal area.

We visited the town of Dakhla, which is the southernmost major city in Western Sahara. When you visit Dakhla, the Moroccans let you know in no uncertain terms that you are in Morocco. There are Moroccan flags everywhere. Dakhla has at least three military barracks that I saw, with a large military presence in the city. The city didn’t feel occupied so much as it was just a town with a military base.

Our first stop was….and ostrich ranch. There isn’t a whole lot to see in Dakhla, so the ostrich ranch is one of the only attractions in town. It is an incredibly inefficient operation when you realize that the ostriches are fed tomatoes and that the tomatoes are grown locally in greenhouses with desalinated water. Making the fresh water, growing the tomatoes in the desert and feeding them to birds to harvest feathers, eggs and meat has to be one of the least efficient farms in the world. I think all of the operations exist just so Morocco can claim that there is some sort of economy in the region, which otherwise is just a bunch of sand. 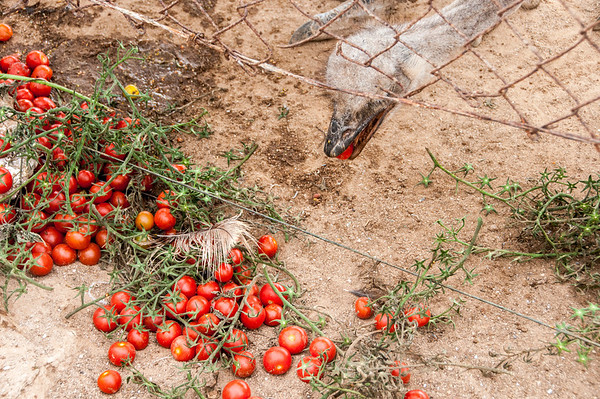 The next stop was an oyster farm, which made much more sense for the region. Located on the coast, the oysters were grown in pens right off the shore. I’d say about half the passengers purchased oysters. I passed just because I was really low on small bills.

After the obligatory stops around town, we took off for the desert, which was the purpose of getting the 4x4s. Our destination was a Moroccan lunch in the desert under a giant tent. On the way there we passed the largest collection of kite surfers I’ve ever seen. It turns out that Dakhla is one of the best spots in the world to kite surf! Who knew? 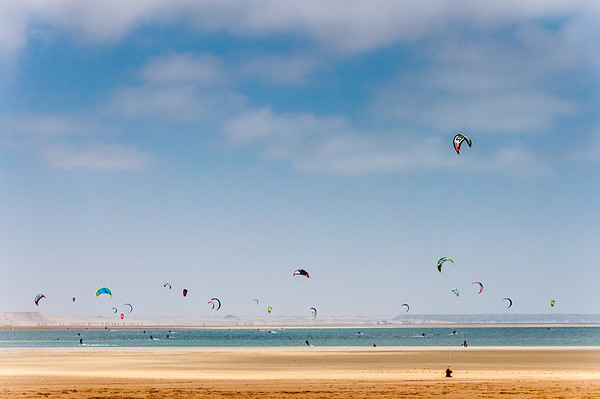 The drive through the desert was great. It was such a contrast to everything we had experienced since we left Swakopmund.

I actually really enjoyed the drive as I enjoy deserts generally. The lunch location was pretty far away, or at least it seemed so. It was situated in the desert along the coast in an area with a very shallow tidal basin. At high tide, the entire area around us would get flooded. We arrived near low tide and by the time we left you could see a noticeable change in the location of the shore.

Our lunch was the biggest, most extravagant meal of the entire trip. There were several courses mostly of meat. There was so much food that most people never got to the final course because they were so full. During the meal there were also live Moroccan music as well as women who were singing and playing percussion on a metal pan with small cups.

Unfortunately, we had a slightly late start in the morning, which resulted in a late lunch so we had to get back to the ship so it could set sail in time.

Western Sahara is actually pretty easy to access if you are coming from Morocco. There are regular flights and you can drive from the north without a passport because to the Moroccans, you never left Morocco. If you are in Morocco, it might be worth a trip down just to see if and if you are a serious kitesurfer, I’m guessing you probably already know about it.