In Senegal, we were given two different options. The first was to visit the Bandia Reserve and have lunch at the Pink Lake. The second option was a tour of the city and a trip to Goree Island.

As Goree Island is a UNESCO World Heritage site, and one of the first dozen in the world at that, there was no way I could pass that up.

The day started in central Dakar where the government buildings are located. This part of Dakar is one of the nicest areas we’ve seen on the entire trip and was on a par, or surpassed, Accra, Ghana. It had the feel of a French Colonial city and was quite clean. Unlike what we found in Sao Tome and other countries, you could take actually photos of the guards in front of the presidential palace!

After visiting the city center, including the Dakar Cathedral, we went to the most bizarre thing I’ve seen on the entire trip: The African Renaissance Monument. The monument sits on a hill outside of Dakar and is larger than the Statue of Liberty in New York. It was officially opened in 2010 to commemorate the 50th anniversary of Senegal’s independence.

It was an extremely controversial project as it cost $27,000,000 in a country which is very poor. It was also constructed by North Koreans, which wasn’t really a popular decision.

What struck me about the statue was how so many of the small things around it (hand rails, flag poles) were already starting to fall apart after only 4 years.

After a slight delay (we missed the ferry) we headed to the highlight of the day: Goree Island.

As I mentioned above, Goree was one of the first World Heritage sites to be created in the inaugural session of the World Heritage Committee in 1978. Unlike most world heritage sites which I’ve visited, I didn’t find Goree Island to be as well protected as a site of its stature deserved. Goree is probably the #1 tourist destination in the entire nation of Senegal, but it had the feeling of being more of a free-for-all.

That being said, being a free-for-all isn’t necessarily a bad thing. Goree isn’t a museum. Goree is a living community with residents living and working on the island. The result is not a lot in the way of interpretative content, but a lot of artists and curio vendors. There isn’t as much on the slave trade here as you might think there would be. 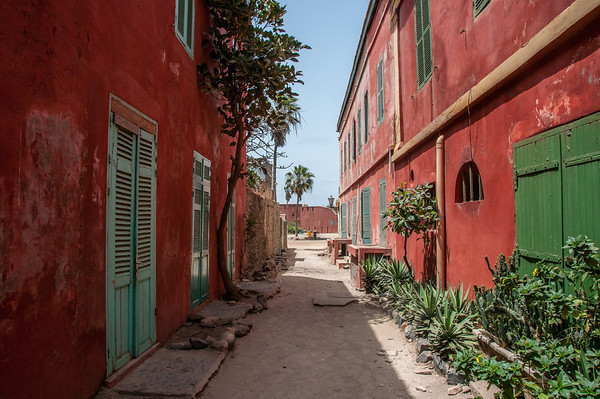 If you are in Dakar, I think Goree is a must visit. Be Careful of the ferry times and the large groups of school children which visit the island. Things will go smoother if you stay to areas without large numbers of students.

Like The Gambia, I’m sure I’ll return to Senegal someday. Given its geographical relationship with The Gambia, it makes sense to visit both countries in one trip. The tourism infrastructure here is better than most of West Africa, but mostly caters to French travelers.