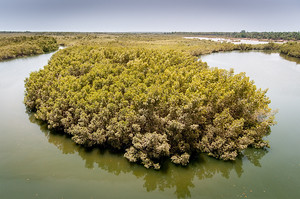 The Gambia is the smallest non-island country in Africa. It is also one the rare countries which borders only one other country: Senegal. In fact, on a map, The Gambia looks like a finger being stuck down the throat of Senegal (if you don’t believe me, go look at a map!)

Carved from the area immediately surrounding both banks of the Gambia river by the British, the Gambia marks a significant turn for the trip. From our previous stop in Sierra Leone, we’ve moved closer to the Sahara. The population is significantly (but not yet exclusively) Muslim, the landscape is drier and, unlike Sierra Leone, The Gambia actually has tourists.

The capital of The Gambia, Banjul, is where we made port, but it is not the largest city in the country. In fact, it is an island which has been slowly losing people to the nearby city of Serekunda. Compared to Freetown, Banjul seemed downright empty.

In Banjul we saw the closest thing to a cult of personality surrounding the president that we’ve seen in any country. The president of the country is Yahya Jammeh, and you could see his image all over the place. It was recently his birthday and there were massive “Happy Birthday” signs all over the city. The best was his official title, which I saw on a few signs. It is:

That is quite a mouthful.

Our first stop of the day was a visit to the Abuko Nature Reserve. Abuko was the first ever nature reserve in The Gambia and is located about 30 minutes outside of the Banjul. Not a large park by any means, it is the closest nature reserve to Banjul and Serekunda. An interesting trivia fact about the park is that it is the closest tropical forest to Europe, or another way to put it, it is the last tropical forest before you reach the Sahara. It is also the most visited tourist attraction in The Gambia.

We were there are the end of the dry season, so the forest was not at its peak. Unlike many African nature experiences, Abuko isn’t about the megafauna. We did see some monkeys, but mostly you’ll see a wide diversity of plant species, termite mounds, birds, and if you are lucky, some crocodiles.

….we didn’t see any crocodiles.

Visiting the forest was the downside of traveling during the dry season. On the one hand, we had great weather and almost never was rained on. On the other hand, the forest wasn’t as interesting as it might be just a month or two from now.

After our visit to Abuko we headed to lunch at a local ecolodge: the Makasutu
Cultural Forest. The resort was located near a river and a mangrove forest. (see above photo) We had the opportunity take a short 30 minute trip on the river by boat to try and see some wildlife before lunch. I chose to walk so I could take photos of the baboons which were on the property.

While I was walking with one of the staff members, we came upon a 5 story observation tower that had recently been built to let you view the river and mangroves. The image at the top of the page was taken from the tower. They also had a new swimming pool, so I took the opportunity to take a dip.

After watching some dancers at the ecolodge, we moved on to the market in Banjul.

As I noted above, unlike many of the other countries we visited on this trip, The Gambia actually gets some tourism. As such, the way vendors in the market behaved was very different from our other stops in West Africa. In our other stops, people were much more laid back. There were few vendors catering to tourists to begin with, and they weren’t very aggressive. The market in Banjul was very different.

In the big scheme of things, the market in Banjoul wasn’t that bad. I’ve experienced far, far worse in places like Cairo, Istanbul and Bali. Nonetheless, it was another significant indication that we were in a different part of Africa now.

I left the market and walked along the beach trying to find an old British fort which is part of a World Heritage Site. I met a man named Mousa who guided me for about 15 minutes showing me the sights and telling me about The Gambia. It turns out the fort was inside the presidential compound, so I wasn’t able to visit it, let alone see it.

The Gambia proved to be an interesting contrast to the previous countries we had visited. It is a place I would like to return to, to explore it more thoroughly. As a West African, English speaking country with a bit of a tourism infrastructure, it is a place which is somewhat exotic, yet not that difficult to visit. I’ve love to come back and spend several days going up the Gambia river by boat.