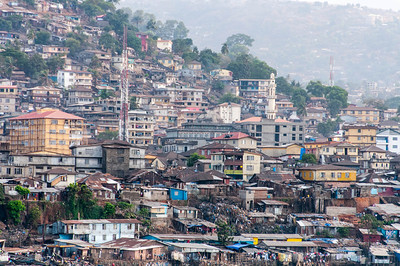 I had no idea what to expect when I visited Sierra Leone. The only thing you hear about Sierra Leone was its civil war which took place in the 1990’s and the horrific crimes which were committed. Children being used as soldiers, amputation as a form of terror, wanton killing, enslaving people to work in diamond mines and systematic rape.

Prior to our arrival, we had a lecture on Sierra Leone and watched several documentaries about the war and its aftermath. It left you feeling sorry for the place before you even arrived.

We arrived in Freetown around noon, which was not a normal stop for us. Usually we would arrive in the morning, disembark around 8-9am and be back on the ship by 5-6pm. Because we had to cancel our stop in Guinea-Bissau, we had 2 days in Sierra Leone, so we weren’t going to be leaving Freetown that night.

We had two options for the afternoon. We could either go to a chimpanzee sanctuary which provides a home for rescued chimps, or do a historical/cultural tour of the city. Because I hadn’t taken many photos of wildlife on this trip, I opted for the chimp sanctuary.

Traffic in Freetown was crazy. Every street was a crush of cars, motorbikes and people. Every building was a storefront for something or other, and everyone seemed to be in some state of disrepair. Shanties with tin roofs were quite common in the city, and the roads were in poor condition.

Yet, almost everyone we passed took the time to wave and say hello to us. Young and old, men and women, so many people were waving and some were even taking our photos (which is a great turn on tourists taking pictures of locals!). Sierra Leone gets so few visitors I think people were genuinely curious and proud that people were visiting their country.

The chimp sanctuary was developed to rescue chimps which had been taken as pets and later abandoned. Chimps do not make for good pets and is illegal in Sierra Leone, yet people continue to do it. Chimps which are brought in are taken through a series of stages which they are acclimated to the larger population of chimps, so they aren’t immediately attacked as an outsider. They start in a large cage and graduate up to a large, outdoor area where they can just be chimps. 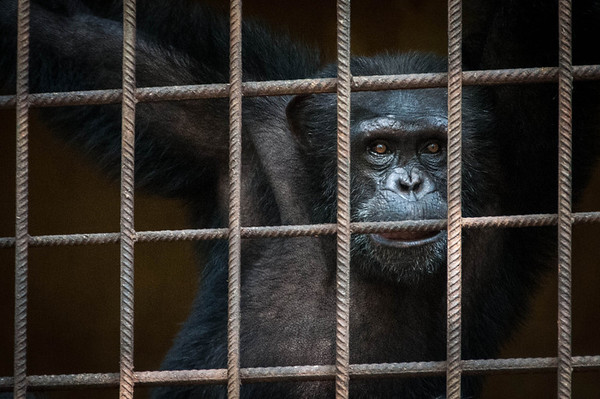 One of the things we were warned about was that chimps will often throw rocks at visitors. Indeed, that is what they do. I was thinking they would toss small stones, but a few tossed some really large rocks underhand. It sounded liked the chimps had evolved to create medieval siege weapons.

My previous comments about the level of development of Sierra Leone, we drove back to the ship on what I can only describe as the best road I’ve seen in all of West Africa. Recently completed by the Chinese it had just opened and was in great shape and still free of litter. As I mentioned earlier in the trip, the Chinese have been involved in construction projects in every country we have visited so far. I will probably devote an entire article to this subject after the trip is over, but suffice to say the Chinese have invested heavily in Africa.

On the ship we were entertained before dinner by the Sierra Leone National Dance Troupe. It was part ethnic dance routine and part Cirque du Soleil. In addition to the native dancers and costumes, there was also a contortionist, a fire dancer and a juggler. The show was quite good and the first time we had locals come on board the ship to perform.

After dinner a group of us set out to visit a trade show which was being held at the National Stadium. What should have been a 10-15 minute drive turned into an hour and 15 minute drive because of the Sierra Leone Independence Day celebrations going on that night. The streets were packed with people.

The trade show itself wasn’t much, but the trip there and back was a fascinating look at Freetown at night, a place we had previously seen in daylight.

Traveling through Freetown was like being in a city that was suffering a blackout. More that half the buildings didn’t appear to have any electricity and the ones that did only had one or two lightbulbs. There were more candles than there were electrical bulbs. There were no streetlights, no neon signs, and no lit up store fronts. I looked at the sky and actually saw a few bright stars. I realized that Freetown was the first city with over 1 million people I had ever visited where I had been able to see stars at night.

Despite the crush of people, everyone seemed well behaved. Again, we were a curiosity and at no point did I ever feel unsafe or in danger.

We arrived back at the ship just after midnight, which we could get away with only because we were staying overnight in Freetown and had things scheduled there for the next day.