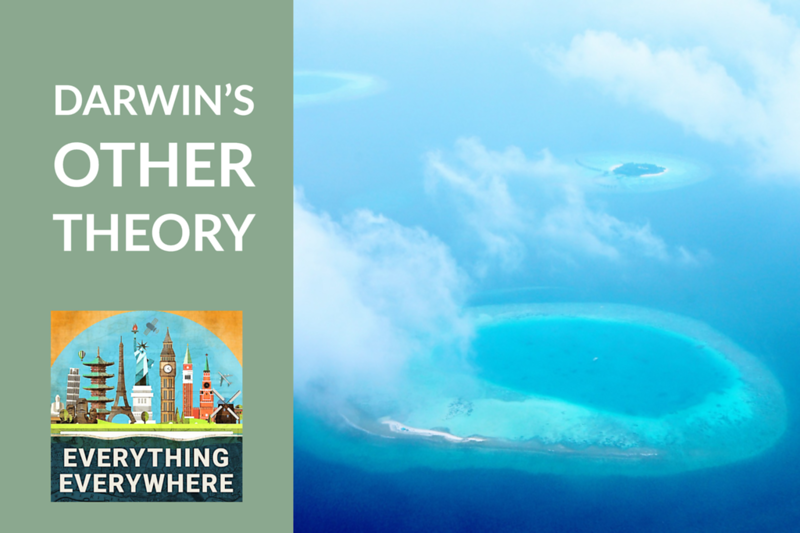 From December 1831, to October 1836, the HMS Beagle set out on a scientific expedition in the Atlantic and Pacific Oceans.

On the ship was a young man named Charles Darwin. That expedition exposed him to ideas that would develop his theory of natural selection which would revolutionize the world of biology.

This episode is not about that theory, however.

This is about his OTHER theory that he developed from that expedition.

Learn more about Darwin’s theory on the development of coral atolls on this episode of Everything Everywhere Daily.

The second voyage of the HMS Beagle was one of the most profound in the history of science.

Originally, the ship was sent out on a two-year expedition to improve nautical maps around South America. With the independence of Argentina and Chile and the opening of trade with these countries, the British needed proper maps for their ships.

One of the big components of the expedition was determining the longitude of various places around South America. They took 22 clocks with them which is how they would measure longitude. I briefly talked about this in my history of timekeeping episode, and I’ll probably do a future episode on longitude and how that probably was solved.

One of the passengers on the ship was a young 22-year-old named Charles Darwin. He was on the ship in the role of a naturalist and a biologist as the captain of the ship thought it would be useful to have such a person on board.

The two-year voyage of the HMS Beagle turned into a 5-year voyage. The initial investigation of the waters around South American expanded into visiting many islands in the Pacific, Australia, and eventually circumnavigating the globe.

During the expedition, Darwin actually spent 3 of the 5 years on land, taking notes, finding fossils, and making observations about the zoology he encountered along the way.

The result of his observations was “On the Origin of Species”. Perhaps the most revolutionary book in the history of biology. The book was published in 1859, 23 years after the HMS Beagle completed its journey.

As part of the expedition, the British Navy asked Darwin to investigate and map coral atolls.

The navy had a vested interest in knowing more about atolls given the threat they posed to ships.

Atolls are circular islands made up of sand and ringed with coral reefs. Coral reefs are extremely dangerous to ships, especially wooden ships. They often lie just below the water line and they can devastate wooden hull ships, and often appear out of nowhere in the middle of the ocean.

During the voyage, in between his study of birds and other wildlife, Darwin made observations and maps of all of the coral reefs he encountered.

His maps of atolls were really good. Many oceanographers have commented on how they could still be used today, as they were so accurate.

Darwin noticed that there were roughly three different types of reefs.

Fringe reefs are where the coral is right next to the beach. You could literally step or swim not far from the beach and the coral would be right there.

A barrier reef is similar in composition to a fringe reef, but they are further out from the shore. There is some sort of space between the reef and the mainland. A barrier reef can sometimes surround an island with a lagoon inside.

Finally, there are atolls. As I mentioned, atolls tend to be roughly circular in shape, with thin narrow islands. They don’t stick out much over the water and usually have a high point of no more than 1 meter above sea level.

Fun Fact: there are four countries in the world that are entirely coral atolls. The Maldives, the Marshall Islands, Kiribati, and Tuvalu.

Darwin’s ideas were published in a paper in 1842 titled, The Structure and Distribution of Coral Reefs, Being the first part of the geology of the voyage of the Beagle, under the command of Capt. Fitzroy, R.N. during the years 1832 to 1836.

Darwin noticed that there seemed to be a progression in the way reefs formed around islands.

Let’s take for example the Hawaiian Islands, which was not visited by Darwin on his voyage, but it makes for a good example.

The Big Island doesn’t have much in the way of reefs. What reefs they do have are close to shore and on the western side of the island where there isn’t active volcanism. It is also the largest, tallest, and newest of the Hawaiian islands.

The next island over is Maui. It is not as big as the Big Island and not quite as tall, is a little bit older, but the coral is more developed.

It sort of continues in this fashion as you go west down the chain of islands. Each island is a bit smaller, a bit older, and has better formed reefs.

The Hawaiian Islands, however, don’t stop with the populated islands. They keep going for a thousand miles past the last of the populated Hawaiian Islands. As you keep going, the islands become smaller, and the coral becomes more pronounced until they become full coral atolls with no island in the middle all the way out to Midway Island.

Darwin theorized that the islands are created by volcanoes, like the Big Island. Then, over millions of years, they erode and subside back into the ocean, all the while coral grows around the island.

In the end, you are left with a ring in the shape of an island, but eventually with no island in the middle.

Darwin also took more observations on water temperature and latitude, which put limits on where coral could thrive and explained why they are only found in the tropics.

Darwin had been sending back reports from the expedition for the entire time of his voyage. By the time he arrived back in England, he was a bit of a celebrity in scientific circles. The reason for the excitement was his theory of coral atoll formation, not anything to do with natural selection. If you had asked most scientists in mid-19th Century England about Charles Darwin, they would probably have known him best as a geologist.

His theory of coral atoll formation has been taught in universities for decades.

Darwin’s theory is simple, beautiful, and elegant. However, it might also be incomplete.

In the last few years, there are some geologists who have begun to question Darwin’s atoll theory.

There is a lot that Darwin just didn’t know about geology which has been learned over the last 190 years. Information about plate tectonics, ice ages, and most importantly, changes in the sea levels.

That being said, Darwin’s model is, as of now, still the dominant model being taught in schools.

So, the next time someone mentions something being Darwinian, ask them what exactly that has to do with the formation of coral atolls.