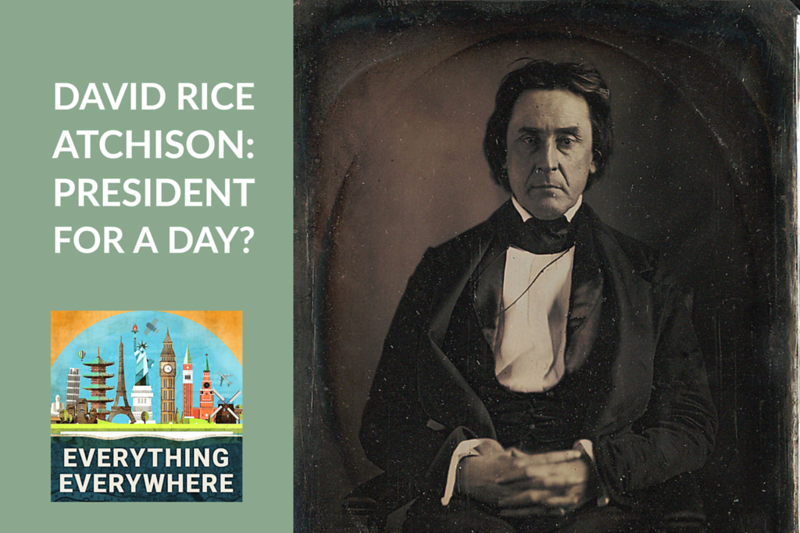 At 12 noon on March 4, 1849, the presidential administration of James Polk ended.

During those 24 hours in-between, who was the president?

According to some, it was a member of the United States Senate.

Learn more about David Rice Atchison, and if he was president of the United States for a single day, on this episode of Everything Everywhere Daily.

Do you want more fun in your life? It can be tough finding the YOU time we all need. Here is a way to feel more energized.

Join The Restoration Depot where friends can meet for all sorts of health and wellness options ON LINE!

The Restoration Depot was created for people like you. It’s convenient and affordable.

Just login to any of their online classes like Yoga, Tai Chi, Meditation, Music, and many more.

That is, The Restoration Depot dot com.

David Rice Atchison was a Democratic Senator from the State of Missouri. He served in the senate for 12 years from 1843 to 1855. He had a reputation for being extremely pro-slavery. He owned slaves, supported all of the slave state issues in the run-up to the US Civil War, and when war finally commenced, he served in the Confederate Army as a Brigadier General commanding Missouri Troops.

Not the finest of people to sit in the upper chamber of Congress.

Quite frankly, if it wasn’t the events that I’ll be discussing in this episode, David Rice Atchison would mostly be forgotten to history.

So, is this true. Was David Rice Atchison really the president of the United States for one day?

To answer the question, we need to understand exactly what happened.

Incumbent President James Polk made a pledge only to seek a single term in office, and he honored that pledge by not running.

Taylor was a career military man who had never expressed any political opinions prior to the election, and in fact, had never voted. He had a great deal of success as a general during the Mexican-American War, which led to his popularity and calls for him to run for President.

He was in fact recruited by both the Whigs and the Democrats, the two major political parties at the time.

Prior to the passage of the 20th Amendment to the Constitution, the President and all members of Congress would take office at noon on March 4.  This lengthy lame-duck period made more sense when everyone had to travel by horseback, and that is why it was eventually changed.

Nonetheless, March 4 was the date everyone took office.

In 1849, March 4 landed on a Sunday.  Zachary Taylor, being a devout man, didn’t want to have his inauguration ceremony take place on the sabbath, so he postponed it one day until Monday, March 5.

His vice president, Millard Fillmore, also delayed his oath of office until March 5.

According to the law at the time, the Presidential Succession Act of 1792, the next person in line to the presidency after the Vice-President was the President pro tempore of the United States Senate.

So, the argument is that because neither Zachary Taylor nor Millard Fillmore didn’t take the oath of office on March 4th and waited until March 5th, that they weren’t president from noon March 4th until noon March 5th.

That means that the next in line would have been the President Pro Tempore of the Senate, David Rice Atchison.

So, is this true and does this argument hold water?

There are a whole bunch of reasons why this is the case.

First, while the constitution does stipulate that the President and the Vice-President must take the oath of office, it only says “before he enters upon the execution of his office…”.

This is legal hairsplitting, but it means before a president can do anything presidential, such as sign a law, appoint officials, sign a treaty, etc. they must take the oath of office.

However, they can still BE the president before taking the oath.

The moment President Kennedy was dead or at least declared dead, Lyndon Johnson became the President, in the same way that someone becomes a king the moment the old king is dead, even if they haven’t been crowned.

The oath of office just is a way to legally unlock the powers of the president after becoming president.

So, for that 24 hour period before took the oath of office, Zachary Taylor was the president. If there was an emergency, he could have quickly taken the oath in a private and without a public ceremony, and dealt with the crisis as president.

The second argument as to why Atchison was never president is that he never took the oath of office either. If Taylor isn’t president because he didn’t take the oath, then Atchison also can’t be president by the same logic.

Moreover, this wasn’t the first time this had happened. In 1821, James Monore delayed taking the oath by a day for the exact same reason, yet no one assumes that someone else was president for a day.

Atchison himself never claimed to be president. At the time, no one seriously thought he was president, and there is nothing in the congressional record to indicate that he was.

There are no constitutional scholars, presidential historians, or even Atchison’s own biographer who think that he was actually president.

At best, if you apply a strict rule of taking the oath to become president, then you could only say that there was a one-day interregnum where there was no president, but it doesn’t follow that Atchison was president.

The next time March 4 fell on a Sunday, precautions were taken to make sure that this didn’t happen. In 1877, Rutherford B. Hayes (who if you remember my previous episode, is a really big deal in Paraguay) took the oath privately on March 3 before taking it publicly on March 5.

That of course then raises the question, if Ulysses S. Grant’s administration ended on March 4, did that mean we had one day with two presidents??