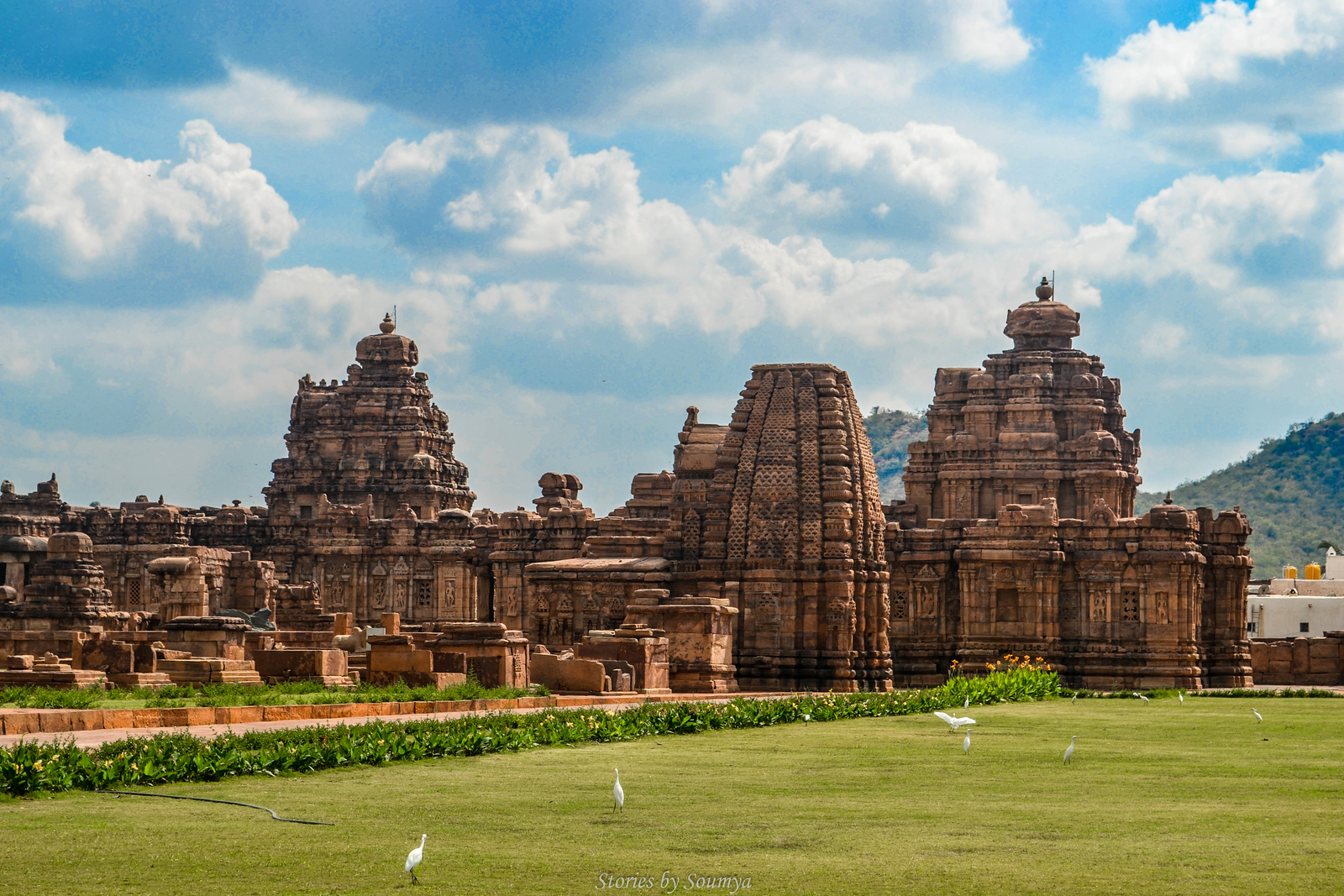 In the southwestern state of Karnataka in India, nestled deep within the semi-arid region of Bagalkot, lies the beautiful ensemble of Chalukya Temples, part of the Group of Monuments at Pattadakal—a lesser-known UNESCO World Heritage Site in India. Not many know about Pattadakal. And that’s why it still remains a pretty offbeat destination in India.

When you’re in Karnataka, you will probably have the awe-inspiring Hampi included in your itinerary. A bouldered landscape, age-old temples, and the intriguing royal enclosures of Hampi make it a favorite among all travelers in India. A more unlikely but exceptional addition is the Chalukya Temples at Aihole and Pattadakal, only a stone’s throw away from Hampi and well worth the trip. Let’s dive into everything you need to know when visiting the temples near Aihole and Pattadakal.

A Brief History of Aihole & Pattadakal

The Pattadakal Complex comprises nine Hindu temples built by the Chalukya kings in the seventh and eighth centuries. Pattadakal was once the cultural capital of the kingdom and the coronation center. The practice of coronation was called Pattabhishekam, and that’s how the city got its name.

The history behind the creation of these temples is interesting. Chalukya kings were known to be great planners. They established an architectural lab at Aihole to create prototypes of the final temples they wanted in Pattadakal. Artists and architects from all over India worked for a number of years at Aihole perfecting the art of temple-making. Then, they put their skills to use at Pattadakal.

Places to See in Aihole & Pattadakal

The temples of Pattadakal are extremely picturesque given the amount of effort and planning that went into building them. What’s even more fascinating is the fact that they are a harmonious blend of both Dravida (South Indian) and Nagara (North Indian) architectural styles. This makes the Group of Monuments at Pattadakal unique and a true hidden gem.
Some of the more iconic temples that you should absolutely not miss when you visit Aihole and Pattadakal include: Virupaksha Temple, the Mallikarjuna Temple, and the Galaganatha Temple.

This is the largest temple in the Pattadakal Complex and the most impressive place to see when you’re in the area. It was built in early eighth century in the Dravida style and was dedicated to Lord Shiva of Hindu Trinity. There’s a massive bull (Nandi), Shiva’s mount right in front of the entrance. Stop a minute there to notice people offering worship to the Bull God.

Carvings in the interior and exterior of the temple are exquisite. You’ll find many decorative door hangings carved of stone, and the filigreed windows of Virupaksha Temple are especially remarkable. Each has a window different design and tells a fascinating story. Don’t forget to check out a beautiful stone relief dedicated to Sun God there.

Another Dravida-style temple that is extremely photogenic is the Sri Bhramaramba Mallikarjuna Temple. Often considered a twin of the Virupaksha Temple, this shrine makes for an impressive sight against the backdrop of a clear blue sky.

Galaganatha Temple (also known as Galageshwara Temple) is one of the most notable Nagara temples in the Pattadakal Complex. On the walls and pillars of the temple you will find tales from Panchatantra, an ancient Indian text comprised of short stories meant to convey a social message. If you have a guide with you as we did, he will point out to a few and explain those messages.

This temple is unique because it features a covered circular path around it to honor the age-old Hindu tradition of religious circumambulation.

Do check out the half-broken monolithic pillar that stands tall in the middle of the temple complex. It talks about the rule of two illustrious Chalukya Kings: Vijayaditya and Vikramaditya and stands in testimony to the many wars that were fought and won by them.

Other Top Places to See

Apart from visiting the Pattadakal heritage temple complex, you can take day trips to Aihole and Badami from the town. Aihole is the architectural lab and Badami is famous for its rock-cut cave temples.

Hampi is not far away either, just 135 km away and with good roads in between. Very often, Pattadakal is done as a day trip from Hampi, but I would not recommend that. It’s ideal to spend a couple of days in the Chalukyan cultural triangle (Aihole-Badami-Pattadakal) and devote at least half-a-day to the Group of Monuments at Pattadakal. Alternately, the 5-Day Ancient Hampi Tour includes an extensive tour of Badami, Aihole, and Pattadakal.

Pattadakal is a paradise for photographers. Sandstone temples against a background of blue and green truly sets the landscape apart. Further, the presence of both Nagara and Dravida temples makes for an intriguing picture frame.

Virupaksha and Mallikarjuna temples are absolutely camera-friendly. You will find plenty of decorative torans, intricate carvings on the walls, and filigreed windows. Not unusual to spot Shiva’s favorite bull and take a shot from behind it, showing the bull’s perspective of the Badami Chalukya Empire.

It’s a good idea to visit Pattadakal after the monsoons, when the gardens are green and the skies are clear blue. You can also spot egrets in the garden.

Pattadakal is never very crowded because of its off-beat location, so there are high chances that you will get good pictures without heads bobbing around in your frame. Photographs in this post were taken in the month of October.

If you want to level up your travel photography before heading to Pattadakal, consider the online Travel Photography Academy.

Pattadakal is a small town and does not offer great places to stay in Pattadakal itself. Travelers usually use Badami (22 km from Pattadakal) as a base and make a day trip to the Pattadakal temple complex. Badami has decent, family-friendly hotels and good eating options around. We stayed at Clarks Inn Badami and were satisfied with the service, or you could consider KSTDC Hotel Mayura Chalukya for a mid-range budget option.

Alternately, if you are combining Pattadakal with your trip to Hampi, you can stay either at Hampi Bazaar, Hospet, or Kamalapur. A road-trip to Pattadakal from Hampi takes a little more than three hours. Leave early in the morning to make the most of your trip.

How to Get to Pattadakal

Pattadakal does not have an airport or a railway station, and the best way to get there is by bus or car.

The closest domestic airport to Pattadakal is in Belgaum, 150 km away. Direct flights connect Belgaum with Mumbai, Bengaluru, and Hyderabad. The closest international airport is the Dabolim Airport in Goa.

Hiring a private taxi for the day is an easy and inexpensive way to get to Pattadakal. Hotels are always more than willing to help you with taxis. Alternately, you could also get an Ola or Uber Outstation taxi to take you to Pattadakal.

Taxi drivers almost inevitably act as tour guides without any additional charges. Be prepared to be entertained by local anecdotes if your driver is chatty.

If you wish to use public transport, you can take a train to Badami from any of the major cities and then take a bus or cab from there to Pattadakal. Buses leave from the main bus station in Badami.

Entrance tickets to the Pattadakal Group of Monuments are priced at INR 40 for Indians and INR 600 (US$ 9) for foreigners. An additional fee of INR 25 is charged for cameras.

You can find government-affiliated, English tour guides right at the entrance to the complex. Recognize them by their complete white attire. We hired one for INR 350 (US$ 5) and were not disappointed. He gave us a complete background of Pattadakal and pointed us to interesting carvings and sculptures that we would not have noticed otherwise.

Pattadakal is located in the arid Deccan Plateau of India. Summers (March – May) are hot, with temperatures going up to 104°F (40°C) in April and May. Winters (December – February) are pleasant with temperatures ranging between 59 – 86°F (15 – 30°C). Monsoon months (July – September) are green and wet.

The best time to visit Pattadakal is between October and February, when there is a slight nip in the air and the sun is friendlier. Greener surroundings also make your trip more pleasant!

Other Tips for Visiting Pattadakal

It is always advisable to carry your own water bottle and food if you don’t wish to buy some from the local vendors outside. There are toilets on site, though it can be hard to find a Western one. There are a few shopping areas too, right outside the temple complex where you can buy inexpensive souvenirs.

You may also carry your hat and sunglasses, especially if you are visiting midday, though the temples are pretty close to each other and you don’t have to walk around a lot. Plus, you will be spending a lot of time inside the temples, which are cooler than the surroundings.

According to UNESCO, the Temples of Pattadakal represent the epitome of an eclectic art form in the Chalukya Empire from the seventh and eighth centuries. The fusion of north and south Indian architectural styles is impressive and unique. This makes Pattadakal a must-do whenever you are in India.

An added advantage is that are far fewer crowds in Pattadakal than anywhere else in India. A remote location and lack of awareness make it one of the true hidden gems of India.

So, when are you planning a trip to Pattadakal?

Soumya Gayatri is a passionate traveler who loves to explore historical and cultural destinations around the world. She dreams of ticking all UNESCO World Heritage Sites off her list one day. She is so glad she could experience the unique amalgamation of architectural styles at Pattadakal. To find more about her experiences, check out her travel blog, Stories by Soumya. Follow her on Facebook, Twitter, and Pinterest.