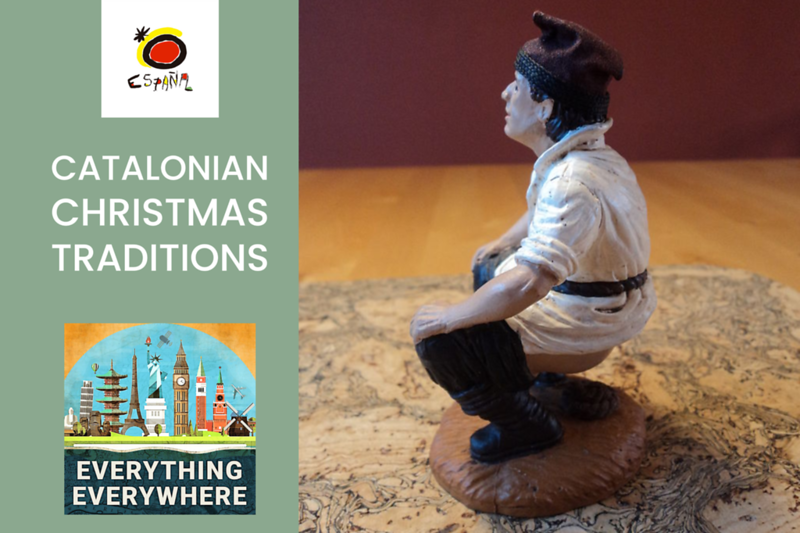 In fact, when it comes to the Christmas season, they have some very very unique traditions.  I’d dare say that their Christmas traditions are firmly ranked #2.

Learn more about the Christman traditions of Catalonia on this episode of Everything Everywhere Daily.

If you’ve never been to Spain, you are probably familiar with it even if you don’t even know it. That is because Spain is used as a filming location for many of the most popular movies and television shows.

Much of Games of Thrones was filmed in Spain. Parts of King’s Landing was shot in Girona, just meters away from where I lived for several months.

Most spaghetti westerns from the 1960s were filmed on location in Spain.

Lawrence of Arabia, Indiana Jones and the Last Crusade, Dr. Zhivago, Star Wars Episode 2, Mission Impossible, the Bourne Ultimatum, and many many other movies have all been shot on location in Spain.

A Christmas nativity scene is a representation in small statues of the birth of Jesus. Most household nativity scenes are just a few statues. You will have statues of Jesus, Mary and Joseph and maybe some animals. Some will include the Three Wise Men, and others will include shepherds and angles.

The first nativity scene dates back to St. Francis of Assisi in 1223 and he used live actors instead of statues.

The idea of reenacting the birth of Christ was approved by the pope and soon such scenes started to appear and churches and cities all around Europe.

They are still a fixture of many towns today.

In Catalonia, they too have adopted the tradition of Nativity Scenes. As with much of Europe, the tradition dates back centuries.

In addition to all of the characters I just mentioned, they will have an extra person tucked back in the far corner of the scene. That person is a shepherd and in Catalan, he is known as El Caganer.

Yes, every nativity scene in Catalonia has a statue of a man squatting down and pooping.

He’s doing his business and most of the statues also show the results of his efforts below him.

Why in the world is this in a nativity scene? Nowhere in the bible is there a mention of a man going number 2 during the birth of Jesus.

The truth is, no one is really sure how the tradition started. There is evidence dating back to at least the 17th or 18th centuries but beyond that, we don’t really know.

Catalonia isn’t the only place in Europe with this tradition, but here it is by far the most famous and prevalent.

Some people believe that the statue is for good luck. The caganer represents fertilizing the fields, and if you don’t have the statue, you will not have a good crop next year.

In 2005, there was a public outcry when Barcelona commissioned a nativity scene that didn’t have a caganer. A group was formed called “Save the Caganer” and the next year, the caganer was returned.

Regardless of how the tradition started, it is now one of the most popular symbols of Catalonia. There are stores in Catalonia which specialize in caganer figures.

There are hundreds of different caganers available now, which subjects including presidents, popes, royalty, athletes, and celebrities. If you want to get a statue of Lionel Messi or Queen Elizabeth pooping, head over to Catalonia.

There is an organization of dedicated caganer collectors called “The Friends of the Caganer”. They have over 70 members from around the world and some of the collectors have over 600 statues in their collections.

The other Catalan custom is the Tió de Nadal or Caga tió, which roughly translates to “poop log”.

The Caga tió is a hollowed-out log. A face is usually painted on one end and it will usually have two sticks sticking out of the bottom to hold it up.

Starting on December 8th, the Feast of the Immaculate Conception, children will leave food for the Caga tió every night before they go to bed and put a blanket over it to keep it warm.

They will do this every evening and then on Christmas Day, children will beat the Caga tió with sticks while singing the Caga tió song, so the log will poop out presents.

Traditionally the logs would defecate nuts and candy, but nowadays it might be actual gifts. Three Kings Day is actually the big holiday for gift-giving, so what is given out at Christmas is usually much smaller.

I’d now like to read the English translation of the lyrics of the Caga Tió song which is sung by children as they traditionally beat the poop log on Christmas.

If you don’t poop well,

I’ll hit you with a stick,

Which are too salty,

Which are much better!

Nora Jones has actually recorded a version of the song, I kid you not.

The reference to nougat, known as turrón in Catalan, is traditionally made from egg white, honey or sugar, and almonds, and it might have been brought to the region by the Moors. It has been associated with the winter and Christmas seasons for ages.

As with the caganer, the origins of the caga tió are shrouded in mystery. There is nothing really explicitly Christian about it, and many think that the tradition dates back to pagan times. Back when everyone had a fireplace, the final step in the tradition was usually burning the log after it had beaten and defecated its presents, but nowadays they will just keep it for next year.

Why does the log have to poop? No one knows. It is just something that they do that this point.

For whatever reason, Catalonia has become known for not one, but two Christmas traditions that involve pooping.

These traditions have become so well known and popular that you can now find caganers and caga tió’s in gift shops in Catalonia year-round.