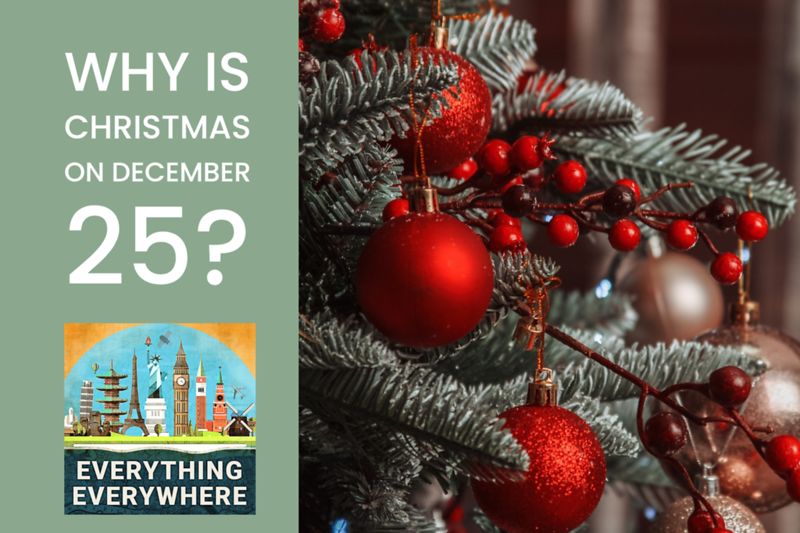 Every year, people around the world celebrate Christmas on December 25. In many countries, it is the biggest single holiday of the year.

Why is it celebrated on December 25? Is there any historical basis for this date and if not, then why do we celebrate it on this date?

Learn more about why we celebrate Christmas when we do on this episode of Everything Everywhere Daily.

In the beginning months of World War I, a very strange thing happened. After the fierce trench warfare of November and December, on Christmas Eve, 1914, the fighting spontaneously stopped. Men on both sides laid down their arms and came to celebrate Christmas with each other. They shared food parcels across the lines, sang carols together, and erected Christmas trees with candles. They buried the dead, exchanged presents, and even played soccer together.

Stanley Weintraub uses the letters and diaries of the men present to underscore the reality of this strange, delicate, twilight-like state of truce when peace and goodwill really were for all men. It was with reluctance that the truce came to an end, and men had to get back to the business of killing.

The first thing that is necessary to establish is that there is nothing documented in any writing, from the bible or other ancient sources, which gives a date for the birth of Jesus.

It isn’t even hinted at or implied. There isn’t really even a vague suggestion as to what season it might have occurred in.

So, for all practical purposes, we really have no idea what day, or even what month, Jesus was born.

Then why do we celebrate it on December 25. To a certain extent, any day that was chosen would be just as good as the next if you don’t know what the real date is. It would be an arbitrary choice.

But December 25 isn’t arbitrary. There is a good reason why it was picked.

Initially, in the very early Christian church, during the first two centuries of its existence, there is no mention or indication that the birth of Jesus was celebrated.

The first known date we have of a December 25 celebration of the birth of Jesus is the year 336 during the reign of Emperor Constantine.

Constantine, as I’ve mentioned in previous episodes, brought Christianity out from being an underground religion. Many of the traditions of early Christians were able to be openly celebrated, and many of them were finally documented.

Most people, when they give an explanation about why December 25 was chosen, get the story half right. By that I mean what they say isn’t technically wrong, but it doesn’t tell the whole truth, and it doesn’t explain why that date, in particular, was chosen.

December 25 was, in the Roman Calendar, the festival of Sol Invictus. Sol Invictus was a god and Sol Invictus meant the Unconquered Sun, as in the sun in the sky.

There are debates as to if Sol Invictus was a separate deity from Sol, but as far as the celebration goes, it was a festival that was established rather late in the year 275 by Emperor Aurelian. It was probably a foreign god that was brought in alongside the Roman gods. Aurelian was from Dacia, which is today the region around Serbia and Bulgaria, and he probably brought the tradition with him. His mother may have been a sun priestess.

However, back in the founding of the Republic, about 500 years earlier, the solstice did fall on the 25th, and the Romans stuck to their calendar dates, even though the dates slowly shifted over time.

Just as an aside, the Roman calendar got so screwed up by the time of Julius Caesar, that their harvest festival was starting to fall before they began planting.

When Christianity began to spread, and when the Empire officially endorsed Christianity, they would often baptize pagan customs and make them Christian. This way it was easier for people to join with the program, and they could be Christian but still celebrate all the festivals they did before.

So yes, Christmas falls on the day of the Roman pagan festival of Sol Invictus, which was on December 25, which was at one time the winter solstice.

That is the part that most people get right.

What they fail to explain is why they picked Sol Invictus? The Romans had tons of holidays and festivals. Like most cultures, they had spring celebrations, summer celebrations, harvest festivals, and of course, one for the winter solstice.

Why did they pick that when they could have picked any other Roman holiday? In fact, the Roman festival of Saturnalia took place just a week before Sol Invictus, and it was a far bigger deal. Why didn’t they take that over?

As it turns out, the Winter Solstice wasn’t the object so much as it was the result of selecting another date: March 25.

This was the date that many early Christians care about.

The early Christian historian set the date of Jesus’ conception to be March 25. This was because there was a belief that prophets died on the same day they were conceived, and it was believed that Jesus died on March 25.

March 25 was also believed to be the day that the world was created, and back then, it also happened to fall on the Spring Equinox.

So the creation of the world, the conception, and the death of Jesus all worked out well for the early Christians, and that day, the day they really cared about, was March 25.

Once you set the date of the conception, then it is just a matter of working ahead 9 months to figure out a date for the birth.

So, yes, Christmas does fall on the Roman Holiday of Sol Invictus, but it wasn’t selected because of Sol Invictus. Rather, it was an implication of setting the date of conception to March 25.

As the Julian Calendar slowly drifted and was eventually replaced by the Gregorian Calendar, the date of December 25 stuck, even though it wasn’t quite on the solstice anymore.

Of the educated guesses which have been made by biblical scholars, most of them probably think the most likely time for Jesus’ birth would have been in the spring or fall.

The December 25 celebration wasn’t and isn’t something that is universally celebrated by Christians. When the Puritans came to American, they banned the celebration of Christmas in Massachuttes. Today there are still some denominations that do not celebrate Christmas, such as Quakers and Jehovah’s Witnesses.

Some places, more as a matter of culture than religion, put more emphasis on Epiphany, which is January 6, the day which Jesus was first met by gentiles.

Regardless of the long and circuitous route it took, and whatever pagan holidays they took over, Christmas and December 25th are now firmly set in modern calendars.