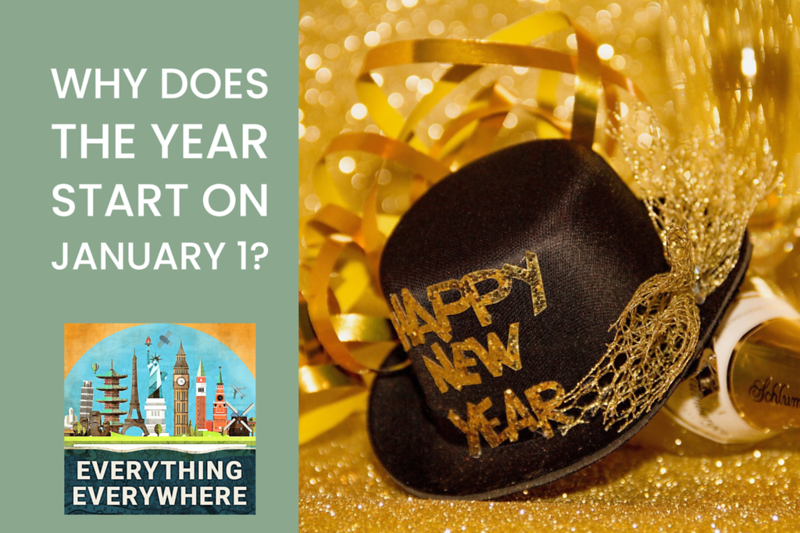 New Year’s Day is not only the day we turn over a new year on the calendar, but also a day where people start resolutions, companies begin new budgets, and everyone screws up writing checks.

While documenting our trips around the sun makes perfect sense, why do we use this day, January 1, as the starting point for our calendar years? Why not some other date?

Learn more about how January 1st became the start of the new year on this Episode of Everything Everywhere Daily.

It’s the new year and that means new year’s resolutions. If you are like most people, you might be looking to lose weight or get in shape.

Skillshare has tons of videos to help you improve yourself without leaving your house. They have dozens and dozens of workout, exercise, and fitness videos to let you get in shape without having to go to the gym.

Every year the Earth orbits around the sun, and we celebrate each revolution on New Year’s Day.

But what is so special about this particular spot in our orbit? Why do we use January first as the start of our year as opposed to some other day?

As we go back in history, most human civilizations did not use a solar calendar. They used lunar calendars.

In fact, if you look at the traditional calendars for countries such as China and Vietnam, or for religions such as Judaism and Islam, they are lunar calendars and their new year’s day changes its date every year.

Our current calendar can be traced back to ancient Rome.

The very early Romans, way back at the founding of the city, used to have 10 months, and that 10-month system is still reflected in many of the names of our months today.

The first month was Martius, named after the god Mars. Then Aprilis,  Maius, and Junius. The months after this was just named after their number: Quintilis, Sextilis, September, October, November, and December.

However, 10 months didn’t really fit nicely into a year.  They had two months’ worth of leftover dates that didn’t fit into any month.

To rectify this, around 700 BC the Roman king Numa added two more months to the calendar. Ianuarius, named after the Roman god Janus, and Februarius, which was now the last and shortest month in the year.

For Romans, the beginning of each month was called the Kalends, so the start of their year was the Kalends of Marius or March 1st.

Then at some point, and no one is quite sure, the year began being counted on the Kalends of Ianuarius. January, went from the 11th month to the first month.

This might have had something to do with the start of the terms of consuls. Romans named their years after the two consuls in power, instead of numbering them.

So, for example, in the year 59 BC, Julius Caesar was consul with Calpurnius Bibulus, and it was known as the year of Caesar and Bibulus. However, Bibulus was so weak, there was a running joke that it was the year of Julius and Caesar.

It might have also had something to do with the fact that it was the Kalendas closest to the winter solstice.

Caesar is actually really important to this story. While the names of the months were very similar to the months we have today, the calendar itself was still a mess.

Caesar instituted changes to fix this problem, and he adopted the suggestions of a Greek Astronomer named Sosigenes of Alexandria. He suggested going to a tropical year, more on that in a bit, and created the 365 day year with a leap year every four years.

So, that’s pretty much the story, right? The Romans set January as the first day of the year, Julius Caesar sets the Julian calendar and we get to where we are today.

In the Middle Ages, this system fell apart completely.

At the 567 Council of Tours, and there were a whole bunch of different Councils of Tours, the church declared that January 1 was not to be celebrated as the New Year, as it was a pagan tradition.

What replaced January 1st? Well, nothing.

There were a bunch of different days celebrated all over Europe for centuries.

Some places used Christmas, which was the winter solstice on the Julian calendar. Some used the floating date of Easter, some went back to the old Roman March 1st, and some, if you remember back to the episode on why Christmas is on December 25, used the important date of March 25 as the start of the new year.

Eventually, for a whole host of reasons, Pope Gregory XIII fixed the problems with the Julian calendar and used the opportunity to standardize the new year back to being January 1. For good measure, they also made January 1 a holy day, which it still is today.

Originally January 1 was the feast of the circumcision of Jesus, but now it is just called the Solemnity of Mary.

In particular, one country was very late to adopt January 1 as the beginning of the New Year.

England celebrated their new year on March 25. In fact, their colonies in the Americas did this as well up until 1752.

In 1750, England passed the “Calendar (New Style) Act” also known as Chesterfield’s Act, which was when they adopted the Gregorian Calendar.

The very first thing mentioned in the act was the problem with using March 25 as the new year, when almost everyone else in Europe used January 1, including Scotland.

So, when England finally adopted January 1st as the start of the new year, so did the American colonies for the first time.

Today, most countries now use the Gregorian Calendar, even if it is only for business purposes to stay in sync with the rest of the world.

New Year celebrations such as Tet in Vietnam, Chinese New Year, or Rosh Hashanah, are festivities held on different days all over the world.

The fact remains that there is nothing astronomically significant about January 1, even though it is celebrating an astronomical event, aka a revolution around the sun.

If we were to start a new calendar from scratch, what day would we pick?

Before I mentioned that we celebrate a “tropical year”, and I picked that word carefully as opposed to “solar year”. There are two types of solar years, and they are very similar.

A tropical year is a time from one season to the next based on when the solstices occur. The current years, based on the Gregorian Calendars, are tropical years.

This can add up, however. The difference between the Julian Calendar and the Gregorian Calendar is only 11 minutes per year, and that caused a lot of problems over the centuries.

This has to do with the precession of the orbit which is constantly changing.

There are two logical places to define a new year based on astronomic principles. The first would be one of the solstices. This is something that humans have measured for thousands of years and have recognized its importance. The winter solstice also isn’t too far away from January 1.

The solstice really has more to do with the title of the Earth, however, not the orbit of the Earth.

There is something significant about the orbit of the Earth that is a point we could use, and oddly enough, it is really close to January 1, even though the ancients had no clue about it.

The orbit of the Earth around the sun is close to circular, but it isn’t perfectly circular. It is a slight ellipse. Hence, there is a point where the Earth is closest to the sun called the perihelion.

Perihelion in the year 2021 takes place on January 2!

So, January 1st is the start of our year, which marks an astronomical event, even though the day has no astronomical significance.

Today’s five-star review comes from listener Tbgal over on Apple Podcasts. They write:

I listen to podcasts all the time and this one, without a doubt, is my absolute favorite. Hoping he never runs out of snippets!

Thank you very much TBgal, and I assure you I’m not worried about running out of episode ideas. Over the holiday break, I brainstormed more ideas and I now have more ideas on my list than I have shows that I’ve actually done so far.

If you would like to see the list and contribute to it, you can do so by becoming a patron over at Patreon.