Read Parts One and Two 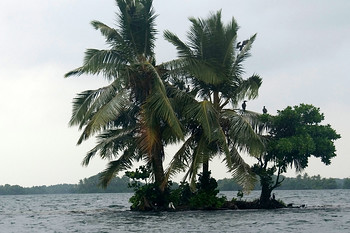 On Sunday, I asked if there were any trails I could take to go see the cliffs. I think they were confused why I would want to go there, but they obliged.

We took off across the lake again to go to the village. The same one we were at the previous day. The trip across the lake is almost reason enough to visit Rennell. The lagoon area is dotted with small islands which are home to the birds of Lake Tengao. Some of the islands are so small, they are home to only a single plam tree.

I should take a moment to talk about the lake and the lagoon itself. Rennell is noted for its bird life. I’m not even a casual birdwatcher, but it didn’t take an expert to realize this place was special. You could watch birds flying and diving all day long. I assume they were eating tilapia, which is the only fish I knew of in the lake. The tilapia was actually introduced several decades ago and was the biggest reason why malaria was eradicated on the island. Rennell is in the Pacific malaria belt and has an enormous body of standing water. By all rights, it should be a hot spot for malaria. However, malaria has been gone from the island for a few decades now, in large part because of the tilapia eating the mosquito eggs in the lake. I noticed only a few mosquitoes, certainly nothing in comparison to what I’ve seen in the Midwest. 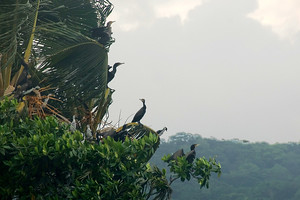 On the drive in to the lake, during one of our eight flat tire stops, we found a few kids who had a small fire going. They had shot a few small birds with their slingshots. I wasn’t able to identify the birds because they were well past the point of identification by the time got there, but they couldn’t have been any bigger than a sparrow. Some of the guys with me chipped in to take the feathers off the bird to help cook it. They didn’t bother to gut the birds or anything, they just put it in the fire as is. The cooked product looked like a thanksgiving turkey shrunk down to the size of your thumb…above the knuckle. To say it didn’t have much meat would be an understatement.

As you crossed the lake you could see birds flying, diving, and sitting in palm trees all over the lagoon. Anywhere a stump or log jutted out of the water there would be a bird perched on top. I wish I knew more about birds. I spent the entire weekend looking at them and to this day I have no idea what they are called.

The March to the Sea

We got to the village and two of the guys grabbed a machete and we started our trip down to the sea. Most of the people of Rennell don’t seem to spend as much time with the ocean as inhabitants of other islands do. The cliffs prevent easy access to the shore, so unless you live where there is an easy path down to the water, you probably just didn’t go that often. I wasn’t sure why they grabbed a machete, but I’m the new guy so i just followed along. 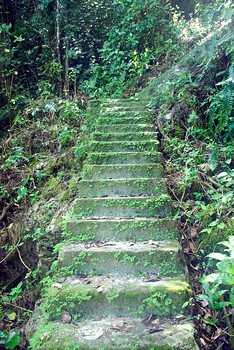 The path was through the forest. What I found strange were the flip flops you’d see long the trail every so often. Everyone on the island wears flip flops. Walking through the bush is rough because the rock is all jagged limestone. When a sandal would break, they would just abandon it on the path. This actually happened to one of my guides on the way back so he just walked with bare feet. I tried taking a few steps with just my socks during a break and I found it painful. How he managed to keep up and walk without shoes is beyond me.

The hike was about an hour and, like the tourist I am, I had my camera bag and tripod with me, whereas the guys just had the machete. By the time we got to the cliffs, I was really sweating and thirsty, damning myself for not bringing water.

Despite the twice weekly flights, most of the major supplies the island gets is delivered by boat. We were taking the trail to the old “port” where the boat used to land. The current landing site is more situated towards the middle of the island, close to the road with a reasonable gentle slope. Our path down to the water was to where the old port was. There were some old cement steps leading down to the beach at a slope which was something close to vertical. Before the current port was built (and calling it a port implies there is some sort of structure. There isn’t anything, it’s just a landing spot and a break in the reef for ships)

Prior to the new port and the landing strip, everything that go on this island had to be hauled several hundred feet up these steep stairs and an hour through the bush to get to the village. Boats, barrels of fuel, everything had to be brought up this way and carried by hand. (After I got back to the village I expressed amazement at how they used to have to carry everything up the cliff and through the forest. One of the men told me that he thought the people of Rennell had gotten soft since they now had life so easy. I almost choked when he called life on Rennell “easy” as it might be the most difficult existence I’ve ever seen) 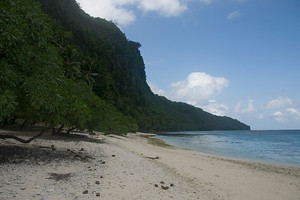 We get down to the beach and it was like no beach I’ve seen in the Pacific so far. It had shells scattered all over the sand. All of the beaches I’ve been to tend to have the shells picked over by locals and tourists. This beach, for all practical purposes, never saw people anymore. There were giant clam shells and snail shells all over the place. Let me also add that the image of a pristine beach on an uninhabited island is wrong. Beaches are usually filled with debris from the sea and trees.

I also finally found out what the machete was for…

Rather than lugging around water, they just climbed a palm tree when we got to the beach, took down a bunch of coconuts and opened them with the machete. Bingo. Instant natural Nalgene bottle.

We hung out on the beach drinking coconut milk and eating coconuts and sleeping for about an hour before heading back up the cliff and to the village.

The flight back to Honiara was scheduled for Tuesday, so we had to leave early Monday to make sure we got there on time. Given our problems on the drive in, I mentally gave the over/under on the number of flat tires we’d get at five. We loaded up at the village and to my surprise, we had 10 people again for the ride out to the airstrip. Mostly women and children, but still a full load.

We had our first flat tire 15 minutes after setting out. After two hours, we had gone maybe a mile or two and had three flat tires. I was getting frustrated and bored and decided to start walking ahead on the road, figuring they would eventually catch up to me at some point and I couldn’t get lost because there is only one road. This turned to to be a decision that had much bigger ramifications that I ever expected….

After I began walking, it started raining. All of the rain I had experienced in the Pacific to date had been brief showers that come in, dump water, and stop. I didn’t think much of it and kept walking. Eventually the rain stopped and I was about an hour’s walk away from the truck.

..and then it stared raining again. And it did not stop for the rest of the day.

I was in the middle of the bush with no rain gear. i was soaked. The rain was warm so it wasn’t that big of a deal, but I had my passport in my pocket. By the time I eventually walked back and met the truck, my passport and wallet were drenched in water. (My bags in the back of the truck also got pretty wet, but nothing was damaged. I keep all my important electronics in waterproof bags inside of my camera bag). While I was out walking, they transferred most of the passengers and baggage to another vehicle and that solved our flat tire problems. We actually only had those three flats on the way back.

The drenched passport directly led to be being denied entry into the nation of Kiribati two days later.

I stayed at a guest house near the landing strip and went to “check in” at the “Solomons Airline office” in the village that night, which was a desk in the bottom of another guest house. I was told that the schedule was really spotty and the plane just might not show up tomorrow, or there might not be seats. It was Solomon Airlines and anything could happen.

I was also told that I wouldn’t have to pay the full SBD$500 fee for the ride to the lake, just my share, so the cost turned out to be reasonable. All my fears about not having enough cash at the start of the weekend turned out not to be warranted. I had just enough for everything.

When I got back to Honiara, I also found the ATM working and accepting my card again. I had just tried to withdrawal within 24 hours after taking out the maximum (which is only like US$120).

I’m really glad I took the time to get to Rennell. With the travel schedule I’ve had the last few months, it was my only real chance to visit an outer island and Rennell is more unique than any other place in the region. It was also an accomoplishment to visit a place that few people have heard of and even fewer have seen first hand.

I had a few people email me asking if it was worth going. My reply is, if you are willing to put up with everything I described, go for it. Else, I’d wait a few years and hopefully they will have built a new runway on the east side of the island. If they ever do that, then travel to Rennell shouldn’t be any bigger of a hassle than traveling elsewhere in the Solomons.

3 thoughts on “Bungle in the Jungle: Finale”