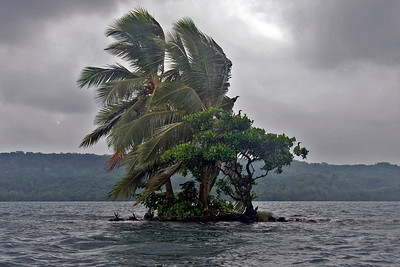 My trip to Rennell is certainly the biggest feather in my travel hat to date. Why? The number of non-Soloman Islanders who visit each year is around 10. You’ll probably understand why when you’re done reading this. The thing which made this my biggest adventure isn’t any one thing so much as the sum total of everything which happened.

Rennell Island is part of the province of Rennell and Bellona which is the smallest province in the Solomon Islands (by a wide margin). It is also ethnically Polynesian, whereas the rest of the Solomons is Melanesian. Geographically, it is also isolated from the rest of the Solomons, sitting to the south of the main archipelago. If you look at the satellite photo of Rennell above, you can see that the most distinctive feature of the island is Lake Tegano. Tegano is a slightly brackish lake which is home to an enormous variety of birds, some of which are only found on Rennell. The Eastern part of the island has also been declared a World Heritage Site by UNESCO, the only one in the South Pacific other than Easter Island. The population of Rennell is about 2,000 people. Geologically, the island is an uplifted coral atoll. As such, the entire island is surrounded by cliffs ranging from 300 to 1000 feet high and all the land surface is a rocky limestone with very thin soil.

The unique nature of the island, in all respects, is why I wanted to visit.

I had purchased my ticket to Rennell several days before in Honiara. I went into the Solomon Airlines office and had no problem getting the ticket. Getting lodging was more difficult. The guidebooks I’ve read didn’t have much information about Rennell, but the few lodges they had listed had no phone numbers or email addresses. The Solomon Islands tourism office had to make the reservation for you via radio.

The one thing I read everywhere I got any information about Rennell was that the car trip from the airstrip to the lake was expensive. I had read it cost anywhere from SBD$500-900 each way. (US$70-120). The travel office quoted me a price of SBD$500. That’s pretty pricey, but not crazy given how hard it is to get fuel on the island and the difficulty of driving (more on that later). Moreover, they only took cash on the island, so you had to have all the cash you needed on you before you left for the island. Room and board was about SBD$200 per day (US$27). I figured I needed about SBD$2000 for the weekend. That works out to US$66 per day for everything, which isn’t too bad.

I get up stupid early and get to the airport at 5am and I am the only human being there. No airport workers. Pitch dark. The domestic terminal wasn’t the same as the international terminal. The domestic terminal was a dump. As I sat there with my bags in the dark, I stared at the door wondering how clumps of mud managed to get that high…and why someone hadn’t cleaned it up. Like the rest of Honiara, there was garbage everywhere on the ground.

About that time I realized that there wasn’t an ATM at the domestic terminal and that the international terminal wasn’t open. I was screwed. I had enough cash for transportation or food/lodging, but not both.

Eventually other people started showing up. A few taxis were there so I grabbed one to drive me to the nearest ATM in town. I figured I’d have enough time to run there and back and still have 15 min to spare before boarding.

I get a cab, get to the ATM and…….TRANSACTION DENIED!! I couldn’t take out any money. I started freaking out. The trip to Rennell aside, not having access to your money is never a good thing while traveling.

I go back to the airport (out another SBD$40 for the cab) and meet the guy from the tourism office who booked my lodging on Rennell. He told me that the flight was delayed until 8:30am. There was no reason for the delay, that is just how Solomon Airlines works. Having gotten another 90 minutes, I took another cab into town to see if I could work something out.

8:00am arrives….no one shows up. 8:05…..nothing. 8:10….zip. Its a 15 min drive back to the airport from the Western Union office. The tourism official said he was going to check me in (they’re pretty informal about that stuff here). At 8:15 no one had shown up to open the office so I figured I was just shit out of luck and went back to the airport, less SBD$100 for the 90 min cab ride.

I get to the airport and tell the tourism guy that I wont be able to go because I just can’t access enough cash right now. He just shrugged and said “here is the son of the man who owns the lodge”. He spoke to him in pidgin and said “it’s no problem. Just pay whatever you need to when you get back”.

Well, that was easy. The very same lax Solomon Island attitude that didn’t open the Western Union office saved me by delaying the flight and working out payment details.

It was 8:30am, I had been up four and a half hours, almost had a heart attack and I hadn’t boarded the plane yet. 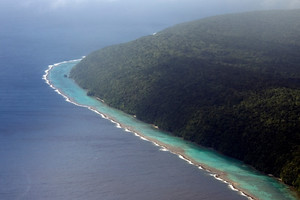 I didn’t expect much more than a puddle jumper and that was what I got. The plane had to be at least 40 years old. It was a De Havellin Twin Otter Series 300. The only comfort to flying on a really old airplane is the knowledge that it has survived that long without crashing.

Most of the people at the airport weren’t there to get on the plane, there were there to drop off packages. Most of the cargo was small boxes and plastic bags full of bread, cooking oil, cigarettes, betel nuts, etc. Four of the seats in the plane were taken up by a mattress.

There were no boarding passes. When the flight was ready to board, a Solomon Airlines employee sitting on the counter (not on a chair mind you) just yelled “you can get on the plane now!” There was no security check.

The flight itself was fine. The landing strip on Rennell was just a strip of grass cut out of the forest.

The entire village was lined up at the landing strip when we arrived.

The plane arrived twice a week and was the primary link to the outside world. There is also a boat which brings supplies once a month, but the schedule is very irregular. ( was told that the boat had been past due for several weeks due to weather and supplies of everything were running low.) Each flight to Rennell is loaded down mostly with packages of stuff which are sent from relatives working in Honiara.

The village with the landing strip (Tigoa) was on the west end of the island and the lake is on the east end of the island. It is about 20 miles from the landing strip to the lake. Tigoa is the “capitol” of Rennell and Bellona. They had a police building, which was by far the nicest structure on the island. It had 24 hour electricity and the police had a newish pickup truck. It was also staffed by members of the RAMSI force which was deployed on the Solomons after the civil unrest there several years ago. (Why they put RAMSI officials on Rennell is beyond me. RAMSI was deployed to quell violence on the island of Guadalcanal between natives of Guadalcanal and Malaitans, both of which are Melanesian and are far removed from anything on Rennell). There were a few other government buildings in the village which had some form of at least part-time electricity. 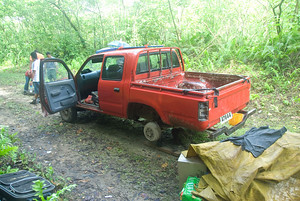 The 20 mile drive took 9 hours. During that time, we suffered 8 flat tires.

There was no spare tire.

There are several reasons we had so many flat tires. The biggest one was the fact that we were carrying 10 people and a full load in the back of the pickup. We had 5 people in the cab and 5 sitting on the edge of the bed, with all the packages and supplies sitting in the middle of the bed.

The road (the only one on the island) at first glance looks like a gravel road, but it wasn’t. It was bare rock and the rock was a very sharp limestone.

The tires and the inner tubes were all in poor condition and had been punctured many times previously.

I’ll be honest, I was astounded that they were able to fix the tire so many times. They eventually ended up crimping the leak and wrapping rubber around it. The inner tube ended up looking like something far from a circle. They would cannibalize other inner tubes and put layers inside the tire to protect the inner tube they were using. It was all pretty ingenious actually. They had gotten tire repair down to an art with nothing more than some scraps of rubber, some rubber cement and a bicycle pump. Necessity really is the mother of invention. The people of Rennell rely on this road and four vehicles on the island. They have no resources to fall back on, so they make due with what they have.

The trip is normally three to four hours, so we spent a lot of time just sitting around. Most of the guys that were along for the ride smoked like fiends with cigarettes which came aboard from the plane, and chewed betel nut (that subject is another post entirely). It so happened that the man who was the head of the East Rennell World Heritage board was riding along so I was able to talk with him, as I did on the way back to Honiara. 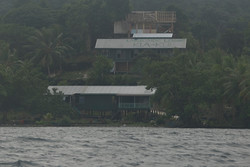 By the time we arrived at the lake the sun had set. I took my stuff out of the pickup and we got in a boat with an outboard motor to go across the lake to the lodge I was staying at. I couldn’t see much given the low levels of light, but the lake was very serene. We were in the lagoon part of the lake which was dotted with small islands. (some barely enough to hold a single palm tree). We arrived at the Kia Koe Lodge and I was given my room and served dinner which had been waiting for me for several hours.

The meal was actually very good. Everything was local: coconut crab, tilapia from the lake, taro and coconut milk straight from the coconut. I had dinner by kerosene lantern as there was no electricity anywhere in the facility.

I went to bed that night knowing that I was probably more isolated on Rennell than I have ever been. Even though Easter Island was more geographically isolated, they had large jets land several times a week and paved roads throughout the island. If something were to happen on Rennell, there was no way to help.

Looking at the lake at night, I saw something strange. Even though there were several villages on the lake, there were absolutely no lights.