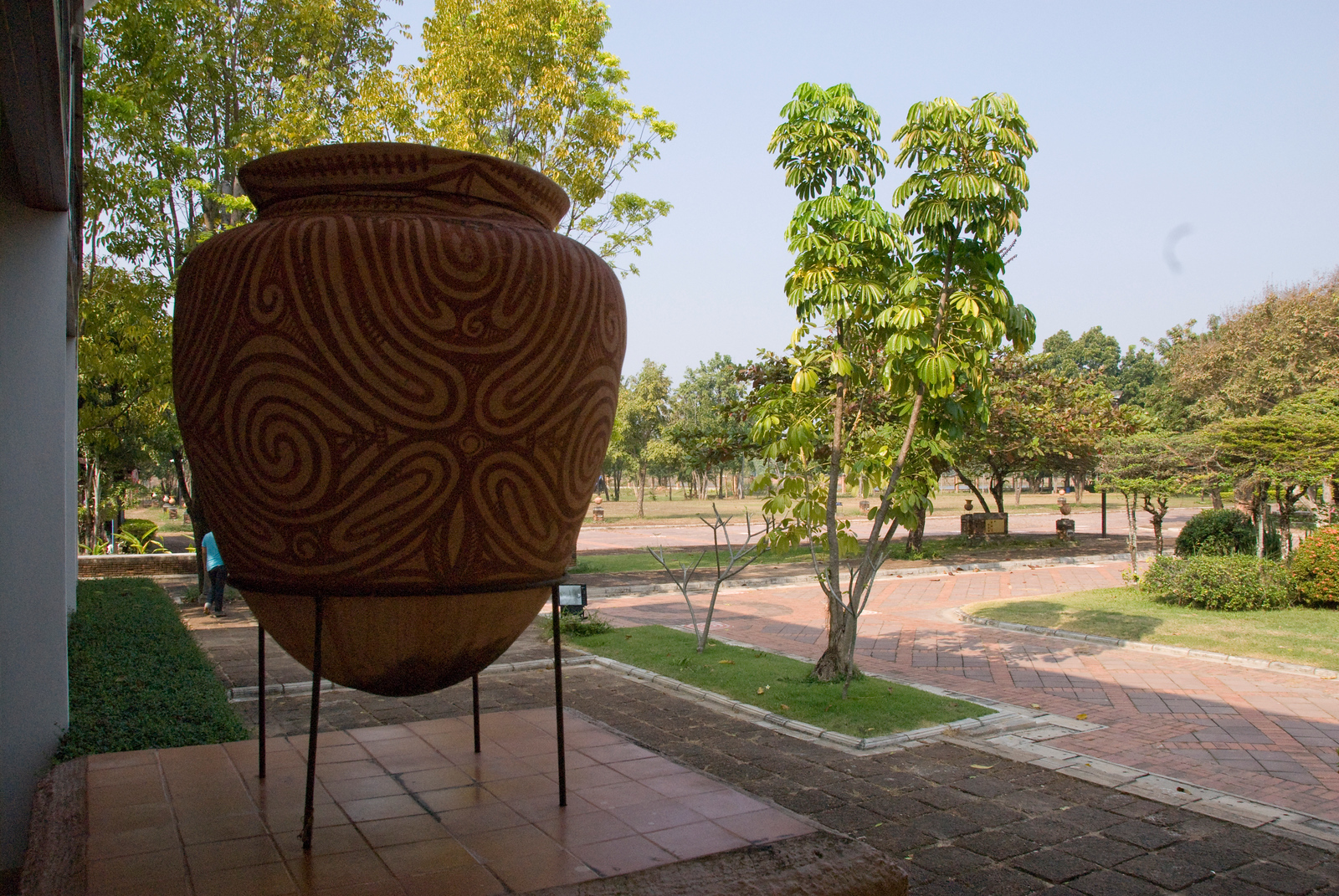 From the World Heritage inscription for the Ban Chiang Archaeological Site:

The Ban Chiang Archaeological Site is a large, prehistoric earthen mound located in an agricultural area in the Ban Chiang Sub-district, Nong Han District of Udon Thani Province in northeast Thailand, within the watershed of the Mekong River. It is an oval-shaped mound formed by human habitation 500 meters x 1,350 meters and 8 meters high. The site was first discovered in 1966. It has since been extensively excavated and its remains studied by Thai and international scholars. Since 1966 the dating of the site has been adjusted and refined over time in line with advances in the understanding and techniques of radiometric dating. This research has revealed that the site dates from 1,495 BC .and contains early evidence for settled agrarian occupation in Southeast Asia, along with evidence of wet rice agriculture, an associated technological complex of domesticated farm animals, ceramic manufacture, and bronze tool-making technology. The total area of the property is 67.36 ha of which approximately 0.09% has been excavated (as of 2012)

The Ban Chiang Archaeological Site is a prehistoric human habitation and burial site. It is considered by scholars to be the most important prehistoric settlement so far discovered in Southeast Asia, marking the beginning and showing the development of the wet-rice culture typical of the region. The site has been dated by scientific chronometric means (C-14 and thermoluminescence) which have established that the site was continuously occupied from 1495BC until c. 900BC., making it the earliest scientifically dated prehistoric farming and habitation site in Southeast Asia known at the time of inscription onto the World Heritage List.

The Ban Chiang cultural complex is well-defined and distinctive from anything that preceded it. Though it can trace the spread and development of prehistoric society and its development into the settled agricultural civilizations which came to characterize the region throughout history which still continue up to the present day. Advances in the fields of agriculture, animal domestication, ceramic and metal technology are all evident in the archaeological record of the site. Also evident is an increasing economic prosperity and social complexity of the successive communities at Ban Chiang, made possible by their developing cultural practices, as revealed through the many burials, rich in ceramic and metal grave goods, uncovered at the site.

The Ban Chiang Archaeological Site is also the richest in Southeast Asia in the number and variety of artifacts recovered from the site. As such, the property has been extensively studied by scholars as the archaeological “type-site” for the beginnings of settled agricultural communities and their associated technologies in the region.

Ban Chiang is an archeological site where they found pottery and evidence of a civilization thousands of years old. That’s great.

They also have a very nice museum which displays the artifacts they found at the site. However, they don’t allow photography in the museum, I had to check my bag at the front desk, so there wasn’t anything to see.

The only options for taking photos was to roam around the grounds outside of the museum. The jar in the photo is just a copy of the type found in the dig, and I think was used for cigarette butts.

The one notable thing about the museum is that a significant part of the whole museum is devoted to a trip made by the King of Thailand to the site on a single day in 1972.

Archaeological tourism in Southeast Asia has been one of the major tourist draws. Sites like Angkor Wat and other temple ruins are one of the top destinations in Asia right now. But there are also other lesser-known archaeological sites that provide a link to the old farming methods and pottery tools such as Ban Chiang Archaeological Site in Thailand. Even though it might not be as popular as the other temple ruins in Asia, it was recognized by UNESCO as a World Heritage Site in Thailand due to its cultural value. It was added to the list in 1992.

The evidence of pottery and farming in this part of Thailand was discovered in 1966. Since then, the site attracted enormous attention from the public, especially archaeological researchers and enthusiasts.

Ban Chiang Archaeological Site is one of five UNESCO World Heritage Sites in Thailand. It is one of the three cultural sites: the others are Ayutthaya and Sukhothai. However, it is not as popular as the two mentioned above. This does not undermine the prehistoric significance of this site. It was discovered in 1966 by Steve Young, a Harvard Anthropology student.

The story goes that Young tripped on a tree during his exploration of the site. As he fell onto the dirt, he noticed some exposed parts of pottery in the area. A series of excavations followed his initial discovery until the search found several other cultural items such as spears, pottery, jewelry, and farm tools. The archaeologists who studied the items found on the site were able to determine that some of these items date back to 2100 BC with the newest items dating back to 200 AD.

All of the items that were discovered at the site are now on display at the Ban Chiang Archaeological Museum. This well-curated facility provides information about each of the item that was collected at the excavation site. These items were able to showcase three main periods and six sub-periods during the prehistoric era in Ban Chiang.

To get to Ban Chiang, you must travel 50 kilometers from the city of Udon Thani. Most of the concierge on the hotel will help arrange transportation for you to get there. Udon Thani is your best jumpoff point to get to the Ban Chiang Archaeology Site. There are several airlines that offer domestic flights to Udon Thani from Chiang Mai, Bangkok or Phuket. You can also take the bus from Bangkok’s Mor Chit station.

There were some controversies that surround Ban Chiang Archaeology Site in 2008 when some of the relics that were unearthed from the site were transferred to a museum in California. These prehistoric artifacts were illegally transported to the US. It was believed that the items were smuggled out of Thailand and donated to museums to obtain large tax write-offs. This scheme was uncovered after a raid that was conducted with one of the National Park Service agents posed as a private collector. Since the expose, the items were returned to Thailand.