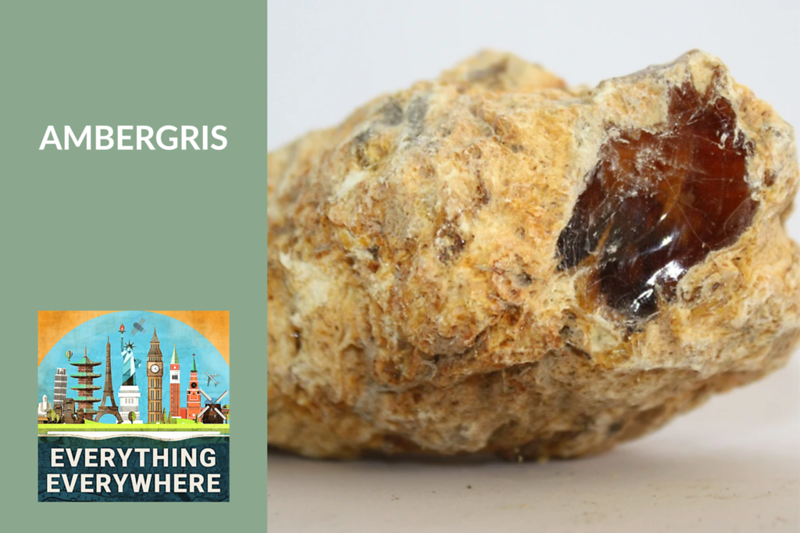 One of the rarest and most expensive substances in the world is actually pretty disgusting. The way it is created is pretty gross, it looks pretty gross, and smells even worse.

Despite how disgusting it is, there are people who will pay as much for it on a per gram basis as gold, yet when you get right down to it, no one really needs it.

Learn more about ambergris, the treasure of the sea, on this episode of Everything Everywhere Daily.

If you are ever walking on the beach somewhere and you come across something that looks like a brownish waxy rock, take a second to pick it up. Put it up to your nose and smell it.

If it smells bad like a cross between feces and rubbing alcohol, you might have found a sample of ambergris, and if you did, you just might have hit the jackpot.

Ambergris is a very rare substance. It is only found in or along the shore of the ocean. Despite its unremarkable look and its less than remarkable smell, we know that humans have been using ambergris for thousands of years.

In ancient Egypt, ambergris was burned as a form of incense. In ancient China, the substance was well known as was called the “dragon’s spittle fragrance”.  During the Black Plague, people thought that carrying around ambergris would protect you from contracting the disease.

Many cultures have considered ambergris to be an aphrodisiac.

The Turks have used it to flavor their coffee, and it was used in 18th in Europe to flavor hot chocolate.

In the 19th century, a cocktail called a shrub was a mixture of rum and ambergris.

The first known recipe for ice cream from the 17th century had ambergris as an ingredient.

King Charles II claimed that his favorite dish was eggs and ambergris.

Ancient Arabs called the substance “anbar” and it is the origin of the word “amber”.

One of the reasons given by the British for the colonization of Bermuda was the presence of ambergris.

Finally, and most importantly, ambergris is used by the perfume industry.  More on that in a bit.

You might have noticed that I haven’t yet told you what ambergris actually is yet.

Sperm whales eat cephalopods. Animals like squid, cuttlefish, and octopus are the primary diet of sperm whales. They will dive down to exceptionally deep levels and gorge on squid and cuttlefish

Unfortunately, the beaks of cephalopods can’t be digested by whales. They are hard and just sit in the stomach of a whale.

Sperm whales secrete a substance from their bile duct which covers the beaks. The mass of the substance will then be expelled from the whale.

As Herman Melville noted in the book Moby Dick, “Who would think, then, that such fine ladies and gentlemen should regale themselves with an essence found in the inglorious bowels of a sick whale!”

There were also theories that it came from other animals including seals, birds, and crocodiles.

It wasn’t until the 19th century when the whaling industry was in full swing that people eventually figured out that they came from sperm whales.

The thing is, every sperm whale doesn’t produce ambergris. It seems that only males produce it, and during the days of whaling in the 19th century, only 1% of sperm whales had ambergris inside of them.

Ambergris is often referred to as whale vomit, but in reality, it might be whale poop. Given the smell of fresh ambergris, this is considered the more likely path of exit.

Once the ambergris is outside of the whale, its journey is just starting.

Ambergris will float and bob on the waves of the ocean for years, and potentially many many years. Exposure to oxygen, salt water, light, and waves slowly transforms what was expelled from the whale.

A 2017 study conducted by Professor Steven Rowland of the University of Plymouth in England tested 43 samples of ambergris. The oldest samples were 1,000 years old. 1,000 years of aimless bobbing in the ocean.

The longer a piece of ambergris is floating on the ocean, the better it becomes.

Eventually, maybe, it will find its way to a shore somewhere where some lucky person might find it.

Ambergris has literally been found almost everywhere on Earth that is on the ocean. There have been more found in the Atlantic Ocean than anywhere else, and more in the Southern Hemisphere, but it can appear anywhere.

So why do people care about this substance today? The primary consumer of the product is the perfume industry.

Some of the chemicals in ambergris have been created synthetically, but not all of them. That means that ambergris still has a great deal of value and it is used in high-end perfumes for both male and female scents.

One of the better-known brands that used ambergris was Chanel No. 5. However, the cost and rarity of ambergris, and its completely unpredictable availability, make it difficult for most perfume manufactures to use on a regular basis.

However, there are still some boutique perfume makers which still do use natural ambergris. One of them is Roja Perfumes in the UK which sells perfumes at £500.00 a bottle.

Even though ambergris is a natural product from a whale, and it is collected without any harm to a whale, it is still regulated in some countries. In particular, it is illegal to possess or sell ambergris in the United States as per the 1973 Endangered Species Act, and in Australia, it is illegal to export or import.

However, the Convention on International Trade in Endangered Species considers ambergris a waste product from whales and doesn’t control it, so it is legal to possess and sell in most countries.

If you do happen to come across some ambergris, and you live in a country where you can sell it, you potentially bring in a massive windfall.

In June of 2021, some fishermen off the coast of Yemen found the body of a dead sperm whale. Inside the whale, they found a 280-pound piece of ambergris which had a value of $1.5 million dollars.

In 2020, a fisherman in Thailand found a piece of floating ambergris that had an estimated value of $1 million dollars, and in 2016 three fishermen in Oman found a sample worth almost $3 million dollars.

These are some of the largest finds, but there are many smaller samples that people have found which might vary in size from a pebble to a small rock which can be worth hundreds to tens of thousands of dollars.

Its price is currently on a par per gram with gold.

Because of its rarity, and its unpredictability, ambergris will probably remain one of the most valuable substances on Earth. So if you are walking on the beach and you see something that looks like a waxy turd, check it out because it just might be as good as a winning lottery ticket.