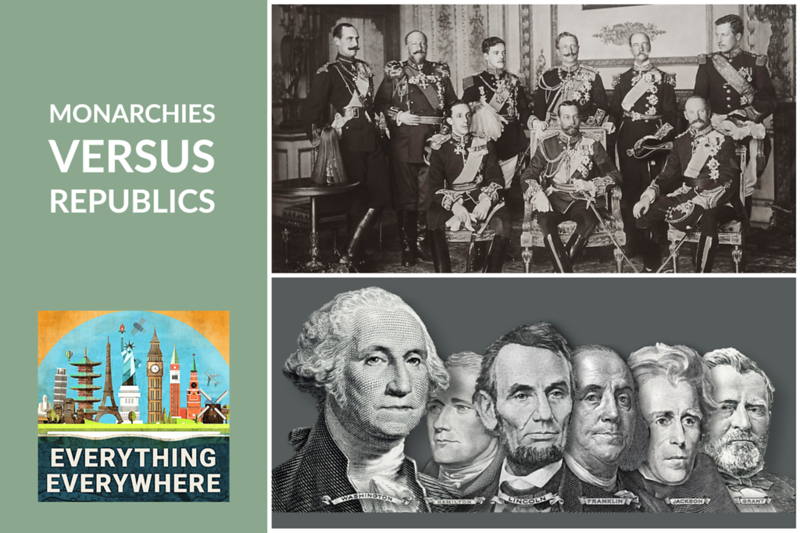 I’ve had many episodes where I talked about a country being a “republic”. In fact, we often use the word but many people have a mistaken idea about what exactly a republic is.

So what exactly is a republic, and how does it differ from a monarchy or other forms of government? What many people think a republic is isn’t necessarily wrong, but it also isn’t exactly right.

Learn more about monarchies and republics and the differences between them on this episode of Everything Everywhere Daily.

Autumn is here, and with it comes cooler weather and jackets. It is already dipping down to freezing at night where I live.

I’ll often go to a cafe to write and work and I can take everything I need in the pockets of my Scottevest jackets. It can easily hold my Macbook Air, charging cables, iPhone, and my AirPods in its pockets, and no one is the wiser that I have anything on me.

The concept of a republic was talked about more in the past than it is today. The Founding Fathers of the United States talked about being a republic all the time. The Romans fought and struggled for centuries to create and keep a republic before they eventually lost it.

In the middle ages and during the Renaissance there were small city-state republics like Venice and Genoa which were situated between larger kingdoms, dutchies, and empires.

The English word republic comes from the Latin phrase “res publica” which simply means, a public matter. The Latin comes from the ancient Greek word Politeia, which roughly means the rights of citizens.

The term “res public” was first used in its modern context by Rennisance writer Leonardo Bruni to describe systems of government that were not monarchies.

Historically, most states were monarchies. There was some chieftain, king, or warlords who ruled over a group of people. Their rules and customs might have been different, but the defining character was a single person calling the shots.

This hairsplitting involves the concept of sovereignty. You might have heard Queen Elizabeth II referred to as the sovereign. That is because as the sovereign, the state is embodied in her as a person.

This is not an exaggeration.

A person who lives in a monarchy is technically not a citizen, but rather a subject. Again, I’m splitting hairs because the people who live in monarchies are often called citizens, and if you said “a citizen of the United Kingdom” no one would bat an eye.

Initially, republics were a minority of states. If you were to create a map of the ancient world 2200 years ago, there would be a lot of kingdoms and empires, and just a handful of republics.

The largest concentration of republics in the ancient world was found around the Mediterranean. Many of the city-states of ancient Greece modeled themselves after Athens, which was a republic. They overthrew the king of Athens sometime around the 9th century BC.

I did a past episode talking about the differences between the Roman Kingdom vs the Roman Republic vs the Roman Empire. They became a republic by getting rid of their king, Lucius Tarquinius. However, when the republic ended, they still went through the motions of being a republic, without being one in fact.

The other ancient Mediterranean civilization which had republics was the Phonecians. Carthage and Tyre were both republics, although they are often overlooked.

The Mediterranean wasn’t the only concentration of republics. Northern India also had several states, usually rather small, which had what we would call a republican form of government.

The Mah?janapadas were a collection of sixteen states in ancient northern India. Many, but not all of them, were republics, including the states of Shakyas, Koliyas, Mallas, and Licchavis.

Moreover, the Igbo people in what is today Nigeria had many cities which were organized as what we would today call a republic, in that they didn’t have a monarch.

In the late Middle Ages, there was a sharp rise in the number of republics in Europe. This mostly had to do with money and commerce. The new republics were mostly small trading states. The members of the Hanseatic League along the Baltic Sea were all small trading republics, and there will be a future episode on the Hanseatic League. Likewise, Venice and Genoa in Italy were city-state republics that relied on trade.

Likewise, the Protestant reformation spawned dozens of small republics throughout central and northern Europe, including for a time, the Dutch Republic.

Later, starting with the United States, countries in the western hemisphere began becoming independent, all of which eventually became republics.

This trend continued into the 20th century to a point where today over 75% of all countries are at least formally a republic.

Before I mentioned that republics are not necessarily synonymous with democracies. For the most part, countries that are republics would be considered to be democracies.

However, it isn’t always the case. Ancient Rome had a very limited form of democracy where only Roman citizens could vote, and the weight of your vote depended on what class you were in.

In early America, only free property-owning men could vote.

This same sort of voting scenario played out in almost every republic, while even though there wasn’t a monarch, it didn’t mean that suffrage was universal.

There are also some countries that are republics in name only. The People’s Democratic Republic of Korea has never had a free election and the leadership of the country has been passed down from father to son for three generations, just like a monarchy.

The flip side to this is that a monarchy can have democratic elections. For example, Canada and Australia are not republics. They have a monarch, yet they also have open elections.

Many modern monarchies are known as constitutional monarchies, or sometimes known as crown republics. They behave as republics for all practical purposes, except that they still have a monarch, in whose name everything is done.

The biggest difference between a traditional monarchy and an absolute monarchy is if the people can choose to get rid of the institution of the monarchy.

Many times when a country becomes a republic, they will keep their parliament where the Prime Minister is the head of the government, but they will replace the monarch with an elected President.

In countries like Ireland, the President is a mostly ceremonial position with some reserved powers such as the power to pardon and the power to appoint judges. This is known as a weak presidential system.

In countries like the United States, the President is both the head of state and the head of government. This is known as a strong presidential system.

Subnational units of government can also be republics. California has the “Republic of California” on its flag. The US constitution in article IV “guarantee[s] to every State in this Union a Republican form of Government”.

That means there is actually quite a bit of leeway in how a state could run its affairs. In theory, there is no reason why an American state couldn’t have a parliament and instead of a governor have a premier. They just can’t have a monarch.

So, in today’s world, the idea of a republic isn’t that big of a deal when most countries are republics or constitutional monarchies. The functional role of a monarch in a country like Canada is very minor.

However, several thousand or even several hundred years ago it was a very big deal. One of the reasons why the Founding Fathers of the United States were obsessed with the idea of a republic is because at that point almost all of them had eventually failed.

Perhaps that is why, at the conclusions of the Constitutional Convention in 1787, when Benjamin Franklin left Independence Hall he was asked by someone in the crowd if we have a monarchy or a republic.