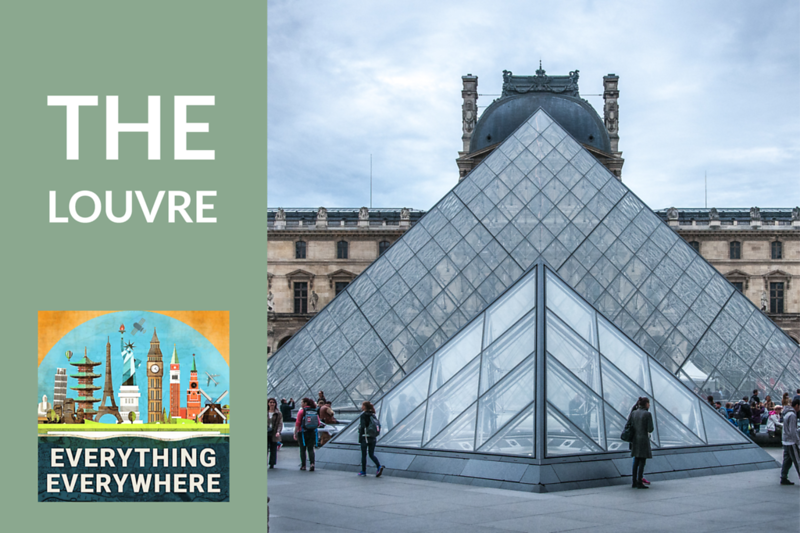 Located in the heart of Paris, along the banks of the River Seine, lies the Louvre.

Yet, it wasn’t always a museum, and the way it acquired its collection was unique.

Learn more about the Louvre, the world’s greatest museum, on this episode of Everything Everywhere Daily.

My audiobook recommendation today is The Louvre: The Many Lives of the World’s Most Famous Museum by James Gardner

Originally intended to protect the capital against English soldiers stationed in Normandy, the Louvre became a royal residence under Charles V two centuries later, and then the monarchy’s principal residence under the great Renaissance king François I in 1546. It remained so until 1682, when Louis XIV moved his entire court to Versailles. Thereafter the fortunes of the Louvre languished until the tumultuous days of the French Revolution when, during the Reign of Terror in 1793, it first opened its doors to display the nation’s treasures.

Ever since – through the Napoleonic era, the Commune, two World Wars, to the present – the Louvre has been a witness to French history, and expanded to become home to a legendary collection, including such masterpieces as the Mona Lisa and Venus de Milo.

Let me start by noting how I’m going to pronounce the name of the museum for the rest of this episode.

In French, the name would be pronounced Musée du Louvre.

However, that is not how I’m going to pronounce it for the rest of this episode. I’ll be using the most standard English pronunciation of the museum: Louvre.

The reason for this is that this podcast is in English, and Louvre isn’t how it is commonly pronounced in English. This is the same reason I say Paris instead of Paris, and France instead of France.

I know some people are pedantic about such things, so I’m just putting this out there at the start.

As I mentioned in the introduction, the Louvre is located right in the heart of Paris in the first arrondissement, on the right bank of the Seine.

The building which houses the museum was originally built as a fortification for the city of Paris. In 1190, King Philip II was on his way to the Holy Land to participate in the Third Crusade. Prior to leaving he ordered the construction of a defensive wall around Paris.

The Louvre was built where the wall met the river. It was a square shaped building with defensive towers and a moat.

The primary reason for the building was to defend against invading English forces from Normandy.

You can still see some of the original medieval structure in the crypt of the Louvre today.

It wasn’t a royal residence until 1364 when King Charles V moved in. By then there was a new, larger wall surrounding the city, and Charles added and renovated the original 12th century fort.

In 1546, King Francis I demolished the old building and began construction of a new palace which would be designed in the French Renaissance style.

The building, as with all such major projects, was done piecemeal over time.

In 1682, Louis XIV moved the royal residence to Versailles, and progress on the Louvre ground to a halt because it was no longer the palace.

After the royal family moved to Versailles, the Louvre was used for office space for governmental departments. There were also apartments in the building for artists and craftspeople that were sponsored by the crown.

The use of the palace as a museum began during the French Revolution.  In May 1791, the National Constituent Assembly declared that the Louvre was “a place for bringing together monuments of all the sciences and arts”.

Ever since 1791, the primary function of the building has been as a museum.

Over time, as the collection grew and the museum became more organized, the museum took over more and more of the building. For almost the entire time it was a museum, it was also the headquarters of the Ministry of Finance.

For years, everyone in France set their taxes to the Louvre.

In 1981, President François Mitterrand instituted his Grand Louvre project. The Finance Ministry finally left the building and the museum was expanded to include almost all of the palace, save for the northwestern most part which is the home to a separate museum, the Museum of Decorative Arts.

Part of the plan was the creation of a new entrance in the Napoleon Courtyard with a new signature design. The entrance selected was a glass pyramid designed by renowned architect I.M. Pei and it opened in 1988.

…and yes, there is an inverted glass pyramid below it, and there is another small stone pyramid below that, just like it appears in the Da Vinci Code. However, it is not the tomb of Mary Magdalene.

The building is certainly historical and interesting, but buildings do not make a museum. Museums can and do move into new buildings.

What makes a museum is its collection, and the Louvre’s collection is enormous.

At the time I am recording this, the Louvre has 615,797 objects in its collection. 483,00can be viewed online via the Louvre website and approximately 35,000 are on physical display inside the museum.

The vast majority of the collection was accumulated by French rulers over the centuries. Almost all European museums have similar histories where it was monarchs or a very rich family that originally assembled the collection.

For example, the Mona Lisa, the most famous work of art in the Louvre, has been in the possession of the French state ever since Leonardo Da Vinci died. Da Vinci took the painting with him when he went to France to work for King Francis I, and left it to him in his will.

There are 7,500 paintings in the collection, of which ? are from French artists.

Many of the works were purchased outright by French monarchs, some were given by artists who were sponsored by the King, and some were taken as treasure or as payment for a debt.

While the royal art collection was put on public display during the French Revolution, it was Napoleon who embraced the idea of creating the world’s greatest museum. In fact, during his reign it was renamed Musée Napoléon.

During all his military campaigns, he collected art which was brought back to the museum. Almost the entire Egyptian wing was taken during his Egyptian Campaign. Cities in northern Italy gave art pieces as tribute after the Italian Campaign.

After the restoration of the monarchy, there was again a burst of collecting. Almost the entire collection of ancient Greek statues was acquired by Louis XVIII and Charles X, including the Venus de Milo.

From the end of the monarchy to the start of the second world war, the collection expanded mostly from donations of private collectors. The famous Winged Victory of Samothrace was added during this period.

There are also a significant number of items which were found via French sponsored archeological digs around the world.

If you remember way back, I did a previous episode on the Mona Lisa and how it became the most famous painting in the world. The short answer is that it was stolen in 1911, and the theft made it a news story all over the world.

It was stolen by a manual laborer who kept it in his apartment for three years. After it was stolen, there were lines of people just to see the blank spot on the wall where it hung.

In World War II, the contents of the museum were emptied before the Germans occupied Paris. Over the course of three days in 1939, much of the museum was packed up and moved to Château de Chambord, where many pieces remained during the war.

Many important works such as the Mona Lisa were moved from place to place during the war.

Technically, the museum was open during the war, but there was almost nothing inside of it.

Today, the museum is big business. The French government pays for operating costs such as salaries, but everything else is covered by the revenue generated by the museum.

The former museum director of the Louvre has estimated that 85% of the visitors to the museum go directly to see the Mona Lisa…. and then leave. The Mona Lisa room is ridiculously crowded, but the rest of the museum is so big, that you can often have an entire room to yourself.

If you took 30 seconds to admire each object on display, it would take you 100 days to see everything, and that is 100 days without sleep or breaks.

There is also a second Louvre that many people don’t know about. It was opened in 2017 in Abu Dhabi. The museum is owned and operated by the Abu Dhabi government, but it had a licensing deal with the Louvre to use the name until 2037.

If you visit the Louvre, I’d recommend giving yourself an entire day. Even with an entire day, there is no way you can see everything. In fact, if you just walked around all day, you’d still probably miss several rooms.

Get there when the museum opens and if you want to see the Mona Lisa, go and get that out of the way. Pro photographer tip: in the Mona Lisa room, don’t bother trying to take a photo of the painting. The more interesting photo is photographing everyone else trying to get a photo.

Make a list of what you want to see and use that as your guide for the day. You will see plenty of things you had no clue were there in the process of going to see what you want.

The list of the world’s great museums is pretty short with names such as the Met, the Hermitage, the Prado, the Grand Egyptian, the Ufitizi, and the Vatican.

But the Louvre stands apart from them all in terms of both the size and quality of its collection.

The associate producers of Everything Everywhere Daily are Thor Thomsen and Peter Bennet.

Great way to learn [the] tide of history or lesser known facts. Great host who gives the right amount of information and no filler talk. The only that I don’t like is the jarring noise that ends an episode, it always scares the sh*t out of me. Why you would end a lovely easy to listen to story with a ear drum obliterating crashing noise is beyond me.

Bostonbub, thanks for the review.

If you noticed, I took your suggestion to heart. I can’t say I’ve gotten a lot of people complaining about the sound effect, but you also aren’t the first person to suggest it. So, I figured there were probably even more people who didn’t bother to say anything, so I changed it.