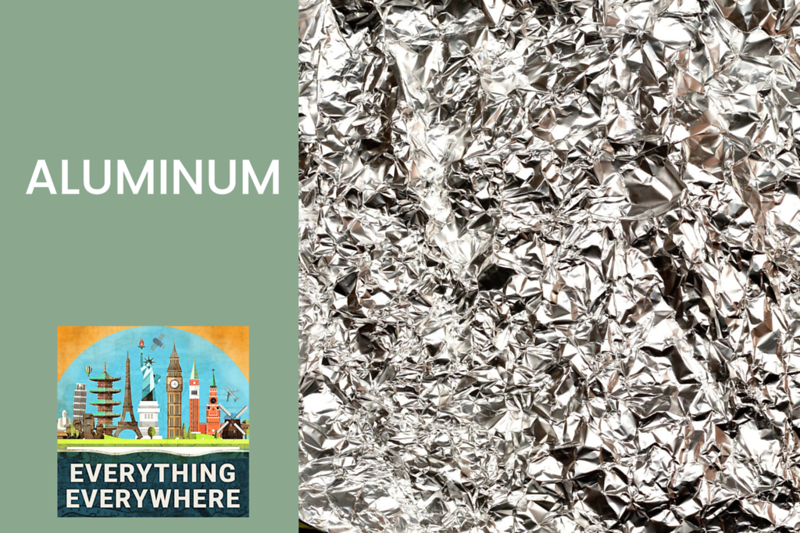 However, there is one metal that was once the rarest and expensive metal in the world, and today it is one of the cheapest and most plentiful.

Learn more about aluminum, how it was once rare and then became abundant, on this episode of Everything Everywhere Daily.

The first thing you have to know about aluminum is that it is a very common element, at least on Earth.

Approximately 1.6% of the entire mass of the Earth is made up of aluminum, and in the crust, which is what really matters for our concerns, it makes up 8.2% of the mass.

Measured in parts per million, aluminum is the third most abundant element in the crust behind only oxygen and silicon. There is more aluminum than there is iron.

That is surprising because, for most of human history, we had almost no aluminum.

Humans went through a stone age, a bronze age, and an iron age, but we never had an aluminum age, even though there is more aluminum than there is iron, copper, or tin.

The problem with aluminum is that even though there is a lot of it, it is very difficult to extract.

Ancient people were known to use a substance called alum, from which aluminum gets its name. Alum was found in the Egyptian desert and on certain Greek islands.

It was used as a food preservative, as a medicine, and as a fireproofing agent. However, while it contained aluminum, it wasn’t anything that could be called a metal.

Metallic aluminum was very rare. So rare, that throughout most of history there wasn’t even a name for it.

Pliny the Elder wrote of a craftsman who presented a cup to Emperor Tiberius which looked like silver but was made from a mysterious, lighter metal. That metal was almost certainly aluminum.

Likewise, the tomb of a Chinese commander which dates back to the third century has ornaments that were made out of 85% aluminum.

This was basically the state of aluminum for most of human history. Maybe very small amounts of it would be found in a condition where something could be manufactured, but that’s it.

The amount of aluminum that was used was so small that it was basically unknown as a unique metal up until the industrial revolution, even though humans were literally surrounded by the stuff.

This was the state of affairs for aluminum until the 19th century.

The word aluminum was finally given to the metal in 1808 by British chemist Humphry Davy, although he probably called it aluminium. He showed that you could create aluminum from aluminum oxide, known at the time as alumina, via the application of electricity. While he proved it in theory, there was still no practical way to make it, and it still wasn’t pure aluminum.

In 1825, Danish chemist Hans-Christian took a step forward with the creation of a metal that he thought was pure aluminum. He said in his notes  “aluminum has a metallic luster and somewhat grayish color and breaks down water very slowly”. What he probably found was an aluminum–potassium alloy, not pure aluminum.

It wasn’t until 1845 that German chemist Friedrich Wöhler had isolated the first pure aluminum metal, however, his technique, while superior to anything which came before it, was still expensive and difficult.

It was in this period in the mid 19th century that aluminum took on the reputation of being more valuable than gold. People knew what it was and it was possible to make, but it was hard and expensive to make, so there wasn’t much of it.

French Emperor Napoleon III had a set of aluminum plates and utensils created for his banquets. However, it was so expensive to create that not everyone could use the aluminum plates, so they were reserved for himself and honored guests. Everyone else had to make do with plain old gold.

You can still see the aluminum dinnerware on display at the Palace of Versailles.

When the United States build the Washington Monument, the giant obelisk was to be the tallest structure in the world at the time. The literal capstone of this great achievement was a pyramid set on the top made of 100 ounces of the most precious metal known at the time: aluminum.

These ornamental uses were pretty much all aluminum was used for. It replaced gold and silver as a setting for some jewelry items

In 1855 a dozen ingots of pure aluminum were put on display at the Paris Universal Exposition. People began speculating on how this new metal could be used including military and industrial applications, as well as more mundane things such as cookware.

When Jules Verne envisioned going to the moon, he imagined the ship would be made out of aluminum.

The exposition popularized aluminum and put more resources into perfecting techniques for its extraction.

Production slowly went up and prices slowly started coming down, but it still wasn’t enough to start an aluminum revolution.

The big change in aluminum happened in the 1880s. There were two developments that radically changed the amount of aluminum that could be produced.

Both of these processes are still used today.

With these techniques in place, and the development of large scale electrical production, everything was in place for aluminum production on a large scale….and that is exactly what happened.

Aluminum production skyrocketed over its previous tiny amounts and the price plummeted.

As production went up and cost went down, the number of uses for aluminum began to grow.

Aluminum has many properties that make it attractive for use. First, it is very lightweight compared to other metals, especially iron. Second, it doesn’t rust, at least the way iron does. Aluminum actually does oxidize, but when raw aluminum is exposed to the air, a single molecule layer of aluminum oxide will form on the surface, which prevents further oxidation.

It is also a good electrical conductor. Not as good as copper or gold, but pretty good, and much cheaper.

Aluminum was critical for the growth of aviation in the early 20th century. The Wright Brothers used aluminum in their early airplanes. The lightweight nature of the metal made it perfect for aircraft. It was also the first metallic replacement for the wood frames of the first biplanes.

In fact, if you do a search of “tin foil” on Amazon or Google, all of the results will actually be aluminum foil.

Jules Vern’s prediction that a ship would be sent to the moon made of aluminum turned out to be true. Aluminum was a major component of the lunar lander during the Apollo missions. It was also the material that made up Sputnik, the first satellite.

In the 1970s, aluminum cans were brought into widespread adoption. I’m old enough that I can actually remember when aluminum cans first came out, and they were a big deal. Everything before that was made of tin.

One of the other properties which makes aluminum so good is that it is very easy and cost-effective to recycle. The high energy which goes into separating aluminum out of its constituent ore isn’t necessary when recycling, so using recycled aluminum will also be more efficient. That is why all over the world, you’ll see plastic bottles as litter, but never aluminum cans because they have value.

In 170 years, humanity’s relationship with aluminum has changed dramatically.  In 1852, the price of aluminum was double that of gold. Today, having just checked, for the cost of one gram of gold you can buy approximately 61,000 grams of aluminum.

So the next time you toss an aluminum can into a recycling bin, realize back in the 19th century, you would have been throwing away one of the most valuable items in the world.