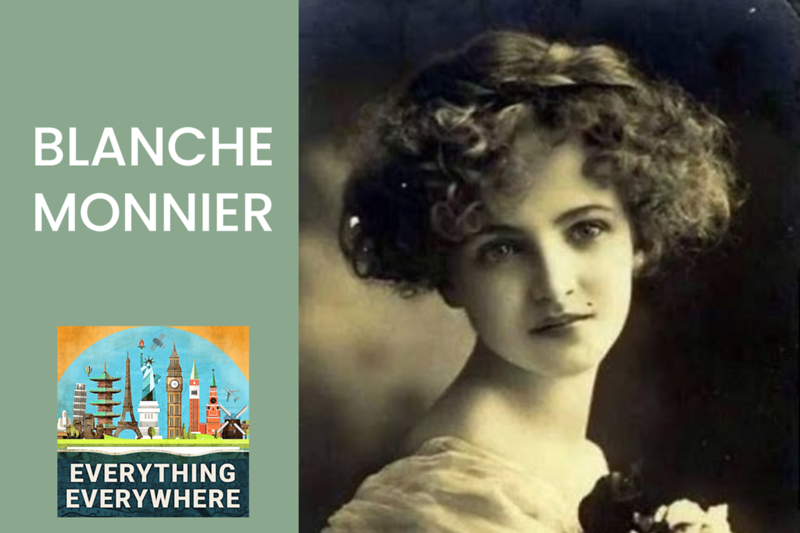 Born in 1849 in Poitiers, France, Blanche Monnier was a beautiful young woman who was born into an aristocratic family.

When she was 25 she suddenly disappeared. When people inquired as to her whereabouts, her family told them she had moved away.

That was not what happened.

Learn more about the terrible fate of Blanche Monnier on this episode of Everything Everywhere Daily.

Blanche Monnier was born on March 1, 1849, in the city of  Poitiers, France. Her family were minor aristocrats with distant ancestry to the French nobility.

By all outward appearances, her family was a normal, respectable family. Her mother was known for her charitable works and had even received a community award in recognition. There wasn’t a hint of scandal which surrounded the family.

As she grew up Blanche became a beautiful young woman. There are photographs you can easily find online which show her from this period.

As a teenager, she had many suitors from the upper rungs of French society.

However, to her parents, no one was ever good enough for Blanche.

In 1874, at the age of 25, Blanche met an older man who was a lawyer, and Blanche wanted to get married.

Her mother absolutely refused and was furious at Blanche for wanting to marry a “penniless lawyer”.

No one knew where she went. Did she run away to get away from her parents? Did she elope with the lawyer?

Except that isn’t what happened.

The attorney general of Paris received an anonymous letter which read as follows:

Monsieur Attorney General: I have the honor to inform you of an exceptionally serious occurrence. I speak of a spinster who is locked up in Madame Monnier’s house, half-starved and living on a putrid litter for the past twenty-five years – in a word, in her own filth.

The police at first found the letter to be suspect. The Monnier family had an impeccable reputation. Blanche’s brother was now a respectable attorney in Poitiers, and the family had always been active in the community.

The police decided to investigate the matter.

They performed a search of the house and didn’t find anything. However, they did detect a rather foul odor coming from the attic and decided to investigate further.

The door to the attic was padlocked so they broke through the door. What they found inside was horrifying.

Blanche had been imprisoned in the attic for 25 years.

She was found naked on a bed that had been encrusted with food, feces, and bugs. She looked like a living skeleton. Her weight was 55 pounds or 25 kilograms.

In the police report which was filed, the scene was described as follows:

The unfortunate woman was lying completely naked on a rotten straw mattress. All around her was formed a sort of crust made from excrement, fragments of meat, vegetables, fish, and rotten bread… We also saw oyster shells, and bugs running across Mademoiselle Monnier’s bed. The air was so unbreathable, the odor given off by the room was so rank, that it was impossible for us to stay any longer to proceed with our investigation.

The police eventually went back in. The windows in the attic had been boarded shut. The police removed the boards, letting light and fresh air come in the room, which was the first sunlight Blanche had seen in a quarter-century.

Again from the police report:

“We immediately gave the order to open the casement window. This was done with great difficulty. The old, dark curtains fell a heavy shower of dust. To open the shutters, it was necessary to remove them from their hinges.”

Blanche was taken to a hospital and her mother and brother, who still lived at home, were arrested.

The news of this immediately became the talk of France. The newspapers dubbed her “La Séquestrée de Poitiers”

How could such a thing have happened. How could Blanche’s mother and brother go on for so long perpetuating a lie? Moreover, why didn’t the servants in the house say anything for 25 years?

When Blanche was taken to the hospital, the doctors worried that she might die because she was so underweight. They gave her a bath and began feeding her.

Blanche commented on how wonderful it was to be clean again and to eat and no longer be imprisoned. She spent so much time in the dark that she had to reacclimate herself to sunlight.

Her mother, not surprisingly, blamed Blanche’s imprisonment on Blanche. She said that Blanche had always been violent and mentally unstable. Blanche’s brother said that she could have left at any time and that she chose to stay in the attic.

The servants in the house said they were so terrified of Madame Monnier, that they refused to say or do anything.

Blanche’s mother died 15 days after her arrest and was never brought to trial.

Blanche’s brother was sentenced to 15 months in jail but managed to get it overturned on appeal, serving as his own attorney.

The state didn’t know what to do with Blanche. She obviously couldn’t return to her family. She also was in no condition to live on her own. The 25 years of imprisonment had damaged her mentally.  Doctors had diagnosed her with anorexia, schizophrenia, exhibitionism, and coprophilia.

Eventually, she was put in the care of a psychiatric hospital, where she lived the rest of her days. She died in 1913 at the age of 64.

During her brother’s trial, it came out that for years neighbors had heard screams coming from the attic of the Monnier house. However, no one did anything because they didn’t want to sully the reputation of the family and bring the wrath of Madame Monnier down upon them.

In the end, one person, who still is not known to this day, did something and notified the police. That one person who acted was responsible for saving Blanche’s life and ending her imprisonment.