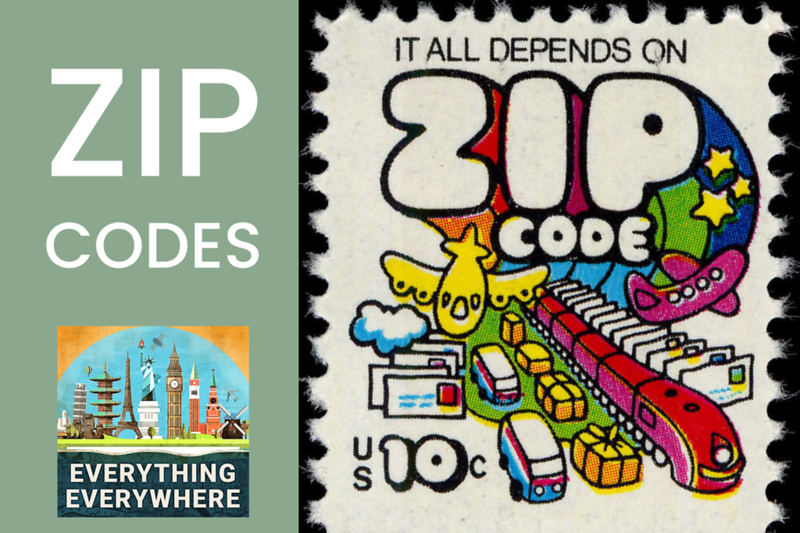 Back in the day, sending letters was slow and complicated.

Nothing could travel faster than the speed of a horse or a ship, and addressing letters could be confusing if there were multiple people in a city.

Over time, the postal system developed systematic methods to deliver the mail quickly and more efficiently.

Learn more about ZIP codes and postal codes, on this episode of Everything Everywhere Daily.

My audiobook recommendation today is How the Post Office Created America by Winifred Gallagher.

Winifred Gallagher presents the history of the Post Office as America’s own story, told from a fresh perspective over more than two centuries. The mandate to deliver the mail imposed the federal footprint on vast, often contested parts of the continent and transformed a wilderness into a social landscape of post roads and villages centered on post offices.

It enabled America to shift from an agrarian to an industrial economy and to develop the publishing industry, consumer culture, and the political party system.

In the late 18th century, if you wanted to send a letter there weren’t stamps, post offices, or even envelopes. You write your letter on a piece of paper, fold it, and write the name and city of the person you are sending it to on the outside.

Then, at some point later, it would hopefully wind up in the hands of the person you sent it to.

If you addressed a letter, it might have been nothing more than “Alexander Hamilton, New York City”, and then the postmaster would have to figure out where that person lived, and which one it was if there was more than one person by that name.

Eventually, street names were used, but even here it was rather vague.

Sometimes a street address would approximate: “Jane Smith, at the corner of Chestnut Street and 3rd”.  Or it might just say, “John Williams, Market Street”.

As cities grew, the confusion surrounding addresses grew with it.

The first big innovation in the United States occurred in the 1840s in Philadelphia.

They developed what is known as the Philadelphia System for street numbering.

Numbering houses wasn’t a new idea. It was first done in the 16th century in Venice when buildings in an entire district were numbered. There was no real order to the system. Numbers were assigned more for tax purposes than for mail delivery.

The Philadelphia System is used almost everywhere in the United States today. In this system, each block on a street is assigned a segment of numbers, usually in units of 100. Odd numbers would be on one side of the street, and evens on the other side.

So, if you are walking from 108 Main Street to 513 Main Street, you know that you’ll be walking four blocks and crossing the street at some point.

The fact that most American cities have nice grid layouts makes this system work, whereas it might not have made sense in many European Cities.

So, a system of street addresses certainly was an improvement.

However, as cities grew, even this could be confusing. Some streets were really long and cities had lots of streets.

By the time World War II started, there were over 20 billion letters being processed annually in the United States.

For example, if I was sending a letter to New York, I would now use “New York 16” to delineate which zone in New York, and which post office, the letter should be sent to.

This system, again, was an improvement, but it still didn’t cover most of the country, and the zones which were created were rather crude.

What was needed was something that would extend the zone system across the entire country.

In 1963, the US Postal Service instituted the Zoning Improvement Plan or ZIP.

The Zoning Improvement Plan divided up the entire country into zones with each zone having a five-digit code. These ZIP codes would be assigned to every address to greatly ease mail delivery.

The biggest challenge wasn’t the creation of the system, but rather getting everyone to go along with it. A great deal of money was spent on advertising and marketing to get people to adopt ZIP codes. They even created a mascot known as Mr. Zip.

Unlike other attempts to get Americans to change, aka the metric system, this one actually worked. Within ten years, ZIP codes were almost universally used in the United States.

The ZIP code system is very systematic. States are lumped together by numbers. All ZIP codes beginning with a 0 are in New England for example. Everything beginning with 9 borders the Pacific Ocean.

The 1963 ZIP Code plan also introduced a system of 2 letter abbreviations for states. Prior to this, there wasn’t a consistent system of abbreviations, and some states like Alaska and Alabama would often be confused.

The only change to the state abbreviations was in 1969 when Nebraska was changed from NB to NE, to avoid confusion with New Brunswick, Canada.

As big of an improvement as the ZIP Code system was, there was still room for even more improvement.

In 1983, 20 years after the implementation of the five-digit ZIP Code, the Postal System announced the ZIP+4 System. This was a further four digits tacked onto the end of the number which provided even more detail. Some high volume recipients would be assigned their own ZIP+4 number. In most ZIP codes, a post office box will have its own ZIP+4 number.

On top of that, within each ZIP+4 area, there are unique Delivery Point Numbers. These are 2 digit numbers that follow the ZIP+4 number which uniquely identifies every address in the country.

The nine-digit zip codes never caught on the way the five-digit ones did, but they are still used all the time by bulk mailers.

The Marshall Islands, the Federated States of Micronesia, and Palau are all within the US Postal System jurisdiction. They all have ZIP Codes and state codes, and you can send anything to or from there for the same price as domestic mail.

There are basically two types. A numeric system like the United States which only uses numbers. This is also the case in Australia and Germany for example.

Then there are alphanumeric systems which are used in countries such as the UK and Canada.

In Canada, the first part of each code is a letter that corresponds to a province. It starts with A in Newfoundland and goes to Y in the Yukon, with some letters being skipped. Ontario has five letters assigned to it and Quebec has 3.

The UK also uses an alphanumeric system. They divide the country up into a bunch of regions which are usually areas around cities. Each region has a one or two-letter abbreviation. For example, Edinburgh is EH, and Burmingham is B.

London has its own system based on points of the compass. For example SE for Southeast, EC for east-central, and NW for Northwest.

The British system doesn’t have a set number of characters. It can be anywhere from 6 to 8 depending on the abbreviation. Also, all of the British Territories such as Gibraltar and St. Helena have their own codes that fit into the British system, as do the Crown Dependencies of Jersey, Guernsey, and the Isle of Man.

Oddly enough, many of the countries I listed all implemented postal codes around the same time. It was the late 50s to mid-70s which most countries adopted some sort of system.

I have to think that if were to design a system from scratch today, we’d develop a consistent system which could be used by every country.

Postcodes around the world have been adopted for many non-postal applications. There is a phenomenon called the postcode lottery or zip code lottery, where some things like insurance rates or bank loans will be heavily influenced by the code you live in.

Mail is still pretty important, even if it is becoming less popular. The United States reached peak mail in the year 2000 when it delivered 104 billion pieces of first-class mail. The number delivered in 2019 was half that number, and it is decreasing every year.

The next time you send or receive a piece of mail, take a second to appreciate the organization and structure that went into the system to get you that letter quickly and efficiently.

Great podcast! Concise, informative, well-spoken, and delivered with just enough personality to make it feel like he is speaking directly to me. This is the best podcast I have discovered recently.

Thanks, Leon, and by the way I am talking to you, just you, right now.

Remember, if you leave a 5-star review, you can have your review read on the show.