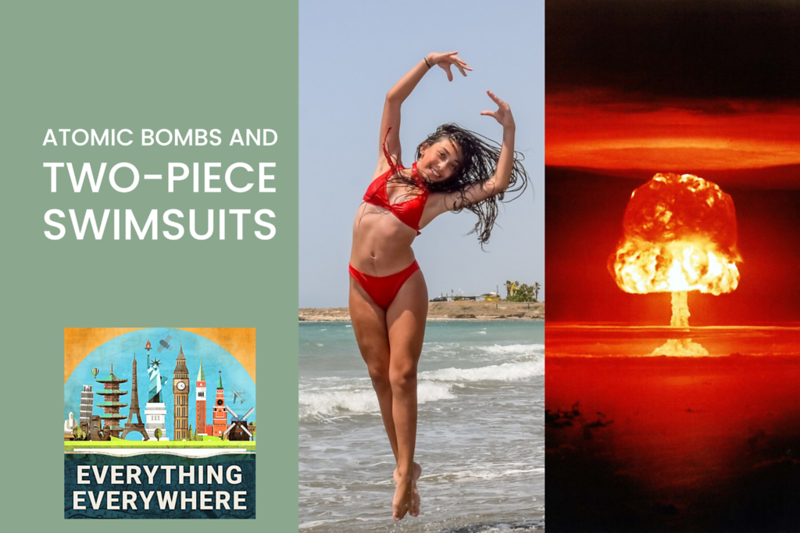 On the week of July 1, 1946, there were two explosions that shook the world. One was a physical explosion and the other was cultural.

These two events, seemingly unrelated, are now linked forever due to the circumstances of that week.

Learn more about what an atomic bomb test and a two-piece swimsuit have in common, on this episode of Everything Everywhere Daily.

If you are a listener to this podcast, you migh have a very wide range of interests that might span the gamut from atomic bomb tests to the history of fashion.

If you do have an eclectic curiosity like me, then you need to check out CuriosityStream. They have over 2,500 documentaries that cover an enormous range of topics from history, culture, biology, physics, and mathematics.

Prices start as low as $2.99 per month or $19.99 per year. That is a whole year of programming for the cost of a month and a half on other streaming services.

World War II had ended just the year before in 1945.

While the war was over, the cold war between the United States and the Soviet Union was just beginning.

At this particular moment, the United States had a monopoly on atomic bombs. However, while they had managed to create and detonate several bombs, there was a great deal they didn’t know about this new weapon.

Only three atomic bombs had been detonated at this point: the original Trinity test explosion in New Mexico, the bomb used over Hiroshima, and the one used over Nagasaki. All of these were detonated over land.

People in the navy had speculations, but no one had any proof.

To this end, the US Navy initiated Operation Crossroads. This was to be a test of atomic weapons in naval warfare.

They eventually settled on a remote coral atoll in the Pacific Ocean in the Marshal Islands.

The navy moved the 167 people who lived on the island to other nearby islands so they could begin testing.

They also sailed a fleet of 95 ships to the atoll which would serve as target ships for the test. These were ships that were set for retirement and the scrapyard, and instead would be used for testing.

Facilities for over 40,000 people were constructed who would be there to supports the tests. They had to build everything from scratch. They built bunkers to observe the tests. They build barracks, kitchens, offices, clubs for officers, and enlisted men.

It was a massive undertaking and all done far away from prying eyes in the middle of the Pacific.

On July 1, the first of the tests took place. It would be the fourth atomic bomb ever detonated, and the first above water.

The test was given the code name “Abel”.

It was dropped from a B-29 bomber and exploded approximately 500 feet above the surface.

It caused surprisingly little damage to the ships because the bomb was about a third of a mile or 600 meters off target.

The next day news of this event spread around the world, and everyone became familiar with this remote Pacific Island which was named: Bikini.

I’m sure all of you are familiar with the word bikini. I’m also sure you realized that it has nothing to do with weapons or bombs. It’s a name for a women’s two-piece swimsuit.

What does this island have to do with the name of a type of swimwear?

Well, to understand that we need to back up a bit and talk about something completely different.

The women’s two-piece swimsuit is not a new invention. There have been mosaics found in Roman villas that clearly have images of women wearing what we could today call bikinis. It was believed that the images were depicting women who were visiting Roman public baths.

Once the Romans were gone, Christianity became predominant in Europe, and modesty became all the rage.

By the 19th century, swimming costumes as they were called, covered most of the body, for both men and women. In fact, Victorians had wagons called bathing machines where women would change, and then the wagon would go into the water so no one would see them enter.

By the 20th century, things were changing. The 1912 Olympics introduced women’s swimming as a sport and in 1913, Carl Jantzen, founder of the swimwear company of the same name, created the first functional two-piece women’s swimsuit. It was mostly like a pair of shorts with a tight, cutoff t-shirt as a top.

Two-piece swimsuits had come into popular fashion well before World War II. Celebrities like Ava Gardner, Esther Williams, Rita Hayworth, and Lana Turner all had popular photos taken with them in two-piece swimsuits that were very popular with GIs during the war.

So, if two-piece swimsuits were already popular, then what is the big deal with the bikini?

Well, in every example I mentioned above, the bottom part of the swimsuit covered up the naval.

This was a really big deal.

In May 1946 in France, fashion designer Jacques Heim introduced a new swimsuit he called the “Atome”. This suit, however, still covered up the naval. We don’t have swimsuits called “atoms” today.

Just a few weeks later, on July 5, French automobile engineer turned clothing designer Louis Réard introduced a new swimsuit. This swimsuit was the first one to expose the naval, which was at that time unheard of. He wanted to give his new product a name that was modern and reflected the explosion in fashion he wished to set off.

In a moment of inspiration, he selected the name which was in the news that week due to the American nuclear test in the Pacific and dubbed his creation le bikini.

Heim and Réard then began a marketing war. Heim hired a skywriter to fly over the French Rivera to spell out  “the world’s smallest bathing suit.”

Réard, not to be outdone, then hired a skywriter to write out “smaller than the smallest bathing suit in the world”.

Réard actually applied for and received, a patent for the bikini.

One of the ad campaigns for the bikini said that “it was not a genuine bikini unless it could be pulled through a wedding ring.”

The reaction to the bikini was predictable. Many countries banned it. The pope denounced it as sinful, and within 20 years, no one cared anymore. It became popularized in the 50s and early 60s by celebrities such as Bridget Bardot, Raquel Welch, Sophia Loren, and Ursula Andrews.

When the song “Itsy Bitsy, Teenie Weenie, Yellow Polka Dot Bikini” made it to number 1 on the Billboard charts in 1960, the battle was over.

Today, it is so non-controversial that it is the standard uniform for women who compete in beach volleyball.

As for the island which was its namesake, unfortunately, Bikini hasn’t fared quite so well.

There were a total of 67 nuclear devices were detonated at Bikin Atoll between 1946 and 1958.

The 167 people who were removed from the island never returned. Today, their descendants number over 4,000, and they are spread amongst the various Marshall Islands.

The United States has paid millions of dollars to the people of Bikini has put millions more into a trust fund which is still paying the descendants of those who were removed from the island.

The island has been cleaned and it is safe to visit, but no one wants to live there. The one thing you can’t do is grow food on the island because of the danger of strontium-90 accumulating in the food.

Oddly enough, the lack of people on the atoll over the last 75 years has made the coral there exceptionally pure and in good health.

In 2010, the Bikini Atoll was named a UNESCO World Heritage Site. It is actually possible to visit, and there are a small number of divers who go there each year.

If you go look at satellite images of Bikini on Google Earth, you can still clearly see oddly round holes in the reef where bombs were detonated.

The next time you see or wear a bikini, think both of the cultural explosion the design created, and the physical explosions which impacted the island which gave it its name.