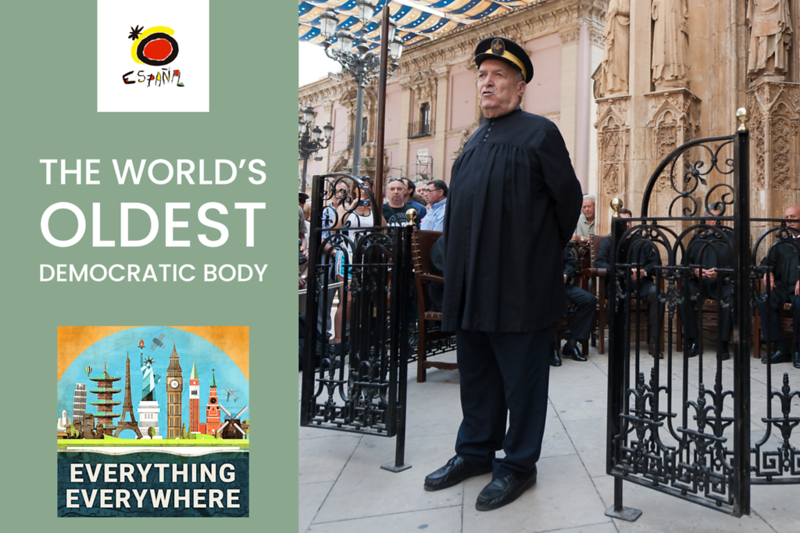 If you happen to be in Valencia, Spain, on a Thursday, at noon, in front of the cathedral, you might be able to witness the oldest surviving democratic tradition on Earth.

For over 1000 years the Valencia Water Tribunal has been adjudicating water disputes among the farmers of the region.

Learn more about the Valencia Water Tribunal, the oldest continuous democratic body in the world, on this episode of Everything Everywhere Daily.

I’ve spoken a great deal about the history of Spain and the great historical sites you can see in the country, and that true.

But Spain also has some very cutting edge modern things as well.

If you are in Valencia to see the Water Tribunal or the Holy Grail, you’ll probably also want to go see the City of Arts and Sciences. This is an incredible futuristic collection of buildings set in the heart of Valencia which was designed by Spanish architects Santiago Calatrava and Félix Candela.

The City of Arts and Sciences is where studios go to film when they want a backdrop for something set in the future. Recent series such as Brave New World and Westworld were filmed there.

Even though the traditions of democracy go back over 2,000 years, there are surprisingly few democratic bodies that last very long. History always seems to have some king, emperor, or dictator which comes along which ruins a democracy, or if not that, then a foreign invasion will do that job.

There are several democratic bodies in the world today which have a very very old history.

The Icelandic parliament, known as the Althingi, dates back to the year 930. While it has a very distant founding, it hasn’t been in continuous operation the entire time. Norway and Denmark have alternatively ruled the country for centuries and from 1800 to 1844, the Althingi was disbanded completely.

Likewise, the parliament on the Isle of Mann, known as the Tynwald, can date back over 1,000 years. They claim to be the “oldest continuous parliament” in the world.

The Republic of San Marino claims to have been a republic since the year 301, but it has had intermittent occupations and suspensions of democracy over the centuries.

However, there is one democratic body that has been in continuous operation longer than any other. It isn’t a parliament, which is probably why it has survived so long.

It is the Tribunal de las Aguas de la Valencia, or the Valencia Water Tribunal.

The water tribunal, as the name suggests, adjudicates water disputes among farmers and canals around Valencia….and that is all they do.

There are stories of the water council dating back as far as Roman times, but there is little evidence to suggest that it in fact goes back that far.

Most historians put a starting point for the tribunal at the year 960, during the Moorish occupation of the Iberian peninsula. It was probably during the Córdoba Caliphate under Caliph Abd-ar-Rahman III that the current iteration of the water council was established.

The need for it arose because Valencia is a rather arid region. The Rio Turia is the primary water source for the nearby farms and the farms in the region are fed by eight primary irrigation canals that come off of the river. The tribunal ensures that every farm gets its fair share of water, and any disagreements about water can be handled peaceably.

Those eight irrigation canals are the basis for representation on the tribunal. The people who elect the representatives are ‘farmers, direct growers of their territories and with well-known fame of “honest men”’.

The eight representatives then choose a person to serve as the president of the tribunal. There is also a bailiff assigned who does not sit on the tribunal per se, but he runs the proceedings.

The court is what’s known as a customary court. Its proceedings are all based on tradition and there is no written set of guidelines or laws.

All issues before the tribunal deal with water. They might usually involve someone taking more water than allowed, taking water out of turn, damaging a canal, improper upkeep of their section of it, or things like that.

When a case is brought before the tribunal it is done in person, and all proceedings are done verbally. The language of the tribunal is Valencian, not Castilian Spanish.

The representative from the canal where the dispute takes place will recuse themselves for that particular case as to be impartial.

All deliberations and verdicts are rendered on the spot.

The decision of the water tribunal is final and cannot be appealed. The only records kept are a simple log of who appeared before the tribunal, the date, and the judgment.

The tribunal also has a second administrative function. After the judicial proceedings are complete, they will go to a nearby building and perform their administrative tasks. Here they are joined by a ninth person who represents an irrigation canal, not on the water tribunal.

One of the reasons why the tribunal has lasted so long is that it limits itself to only water issues. Despite all the changes in government over the last 1,000 years, the water tribunal has been left alone. It didn’t threaten the power of any of the Caliphs, Kings, or Emperors who ruled over the land at the time, and if anything, it was one less thing they had to worry about.

The Water Tribunal has earned a place in the Spanish Constitution and was also named by UNESCO as part of the world’s intangible cultural heritage.

You can actually watch the proceedings of the Water Tribunal if you happen to be in Valencia. Sessions are held outdoors and in public.

It takes place at noon, every Thursday at the Plaza de la Virgen, which is right outside the Valencia Cathedral’s gothic door.

While you’re there, you should probably go check out the Holy Grail, which I talked about in a previous episode, which is only a few meters away inside the cathedral.

Make sure to be there on time because the proceedings don’t last very long. Most days there will not be any disputes, and the entire affair will be finished in about five minutes. But I do guarantee that it will be the most democratic five minutes of your life.

This is the one podcast that I don’t skip the promo for other things at the very beginning of the show. Even those books, podcasts etc. are interesting! Thank you for creating your podcast.

Thank you very much, A, and thanks to all of you who have left reviews. Remember, if you leave a 5-star review, you can have your review read on the show.