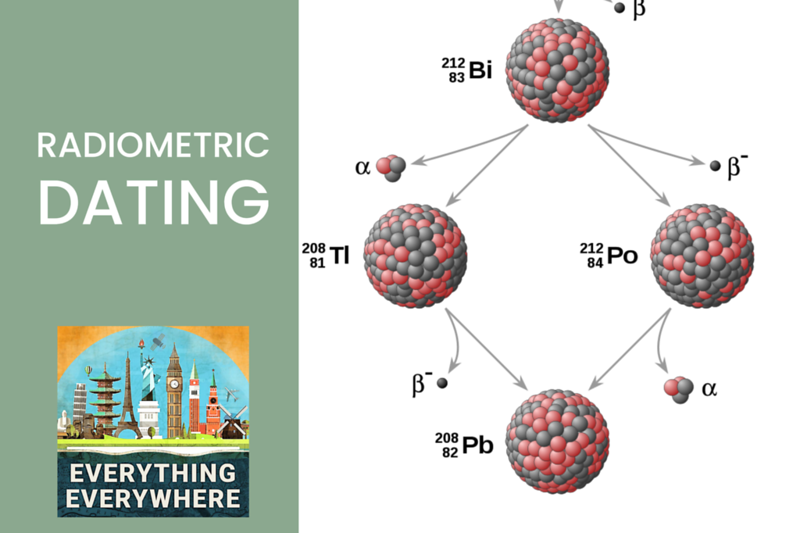 Have you ever heard a science story on the news where they mention how old something is then ask yourself “how do they know that?”

How is it possible to tell the age of something with any degree of certainty when there was no one around millions or billions of years ago?

Well, there are answers to those questions.

Learn more about radiometric dating, and how we can measure the age of objects and the Earth, on this episode of Everything Everywhere Daily.

If you haven’t listened to my previous episode on radiation, you might want to do that to catch up, because the key to understanding how we can get ages of really old things mostly has to do with radiation.

I’ll start by saying that how you date something will depend on what it is your dating. Somethings don’t require radiometric dating at all. If something is made out of wood, it might be possible to date it using dendrochronology, or the study of tree rings. Dating manufactured items can often be done by just comparing them to known samples. If you find a Roman coin, you can date it by knowing when the Emperor on the coin reigned.

However, those techniques have their limits.

Let’s assume someone in an archeological dig finds a swatch of cloth. How do you know how old it is?

You could just check to see what other items were buried next to it. Maybe there are some coins that could easily be dated or pottery that might identify a time period.

But, let’s assume that none of those things are available. You have a piece of cloth and you have no idea how old it is. How could you go about getting an age?

This brings us to the first technique: Carbon-14 dating.

As the name would imply, this technique measured the amount of the isotope carbon-14 which is found in a sample.

There are three types of carbon isotopes that exist in nature. Carbon-12, which makes up the vast majority, is 98.89 % of all carbon. Carbon-13 makes up 1.11 % of carbon. Both of these isotopes are stable, meaning they do not undergo radioactive decay.

However, there is another isotope, carbon-14, which is radioactive.

Carbon-14 doesn’t makeup very much of the carbon on Earth. About one carbon atom per trillion is carbon-14.  Moreover, carbon-14 is constantly being made in the Earth’s atmosphere from cosmic rays. That means that every living thing on Earth is constantly absorbing carbon-14.

So long as an organism is alive and part of the carbon cycle, it is constantly bringing carbon-14 in and expelling it. However, once it dies, it is no longer bringing in carbon-14.

So as soon as something dies, and no longer brings in new carbon-14, the amount of carbon-14 in the material will gradually decline over time via radioactive decay.

Because we know the decay rate, and because the carbon-14 ratio is similar for almost every organism, we can determine the age of something by measuring the amount of carbon-14 which is left.

In the example, I gave with the piece of cloth, the organic fibers in the cloth came from the plant which was harvested to make the fibers. When the plant was harvested, it stopped accumulating carbon-14, and the carbon-14 which was trapped inside it began slowly decaying.

If half the amount of carbon-14 exists in the cloth from what was originally there, then it would be 5,700 years old, which is the same as its half-life.

By dating samples of known ages, scientists have created a calibration curve that can be used to compensate for differences in carbon-14 over time.

For example, in the 1950s there was a spike in carbon-14 creation on Earth. Why? Because that is when most of the above-ground nuclear testing occurred which created more carbon-14 than usual.

The technique was developed in the late 1940s and today it has become pretty accurate.

However, there are limits to what it can do.

For starters, it only works on organic material. Second, it can’t age anything older than about 50,000 years. Beyond that point, there just isn’t enough carbon-14 left to measure. Also, it is difficult to measure anything which is really recent. It can’t tell if a piece of wood was cut 10 years vs 5 years ago, because there hasn’t been enough carbon-14 decay to measure.

In Turkey, they discovered a buried temple called Gobekli Tepe. They were able to age it by doing a carbon-14 analysis on the ashes and ciders found in a fire pit buried along with the temple.

Could they measure the rocks which made up the temple directly? The answer to that is, no.

To understand why we need to look at the next techniques for dating rocks.

In principle, the technique for dating rocks is the same as that used in carbon-14 dating. You are measuring the radioactive decay of unstable isotopes.

Let’s take a step back and ask the question, what is a rock? A rock is just an aggregate of minerals.

What is a mineral? The simplest definition of a mineral is “a solid with a crystalline structure”.

If you measure the parent isotope and the daughter isotope that it decays into, then you can determine how long ago the mineral was created, because only the parent element could have been chemically used to create the original mineral.

There several different types of mineral dating that can be used. Some of the common ones are:

There are actually many other elements that can be used beyond the ones I just listed. In all of these techniques, you are looking at the ratio of the original isotope with the resulting isotope.

If you remember back to my episode on Clair Patterson, he used Uranium/Lead dating to determine the age of the Earth. His estimate of 4.55 billion years very close to the age which has been subsequently confirmed by many other researchers.

As powerful as a technique as this is, it does have its limits.

Likewise, if a stone is cut and used in construction, these dating techniques will tell you nothing about when the construction took place. Radiometric dating doesn’t work for telling us how old the pyramids are for this reason.

There are other techniques that rely on radiation, but not on radioactive decay.

Luminescence dating is a technique used by archeologists and geologists which determines how long it has been since something was last exposed to sunlight or heat. When some substances are exposed to light or heat, they are reset, and then electrons can be captured in their matrix over time as it is exposed to radiation.

Luminescence dating isn’t quite as accurate as radiometric dating, but it can be used on objects which otherwise can’t be dated, and the process of determining the date is much cheaper than trying to measure isotopes.

There is another technique that is a bit more controversial, or at least it was expressed to me back when I studied geology years ago, and that is Cosmogenic radionuclide dating.

This technique is designed to date how long a surface has been exposed.

The theory behind this is that the surface of the Earth is constantly being bombarded by cosmic rays. When these high energy particles hit atoms, they can cause changes to atoms that are exposed on the surface. The longer the exposure, the more changes will take place from the cosmic ray exposure.

Because there are many different elements in rocks, the elements which get changed and the resulting isotopes will depend on the chemical composition of the rock.

This technique is useful for determining when a glacier might have retreated and exposed the fresh rock underneath.

All of these things I’ve mentioned so far involve the measurement of physical objects. We have to have something to be able to date it.

How is it that astrophysicists can date the age of the universe? After all, we only have access to things on Earth along with a very small number of meteorites and lunar samples.

That has to do with the Hubble Constant and measuring very distant stars and galaxies, but I am going to leave that for another episode because that would be way too much to explain here.

The takeaway from this episode is that there is real science behind the dating of rocks and objects. This brief overview is just a taste of what some people have spent their entire careers working on. All of these techniques have been cross-checked with each other to verify their accuracy, and when possible, checked against known events.

For example, we know the exact date Mount Vesuvius erupted, and that event was part of the creation of new rock. Those rocks have been tested to see how closely they correspond to the known date of the eruption, and the radiometric estimate was very close to the actual date. So, science works!

The next time you hear something about how old something is, take a second and think how they might have gone about dating the object. Odds are it had something to do with radiometric dating.