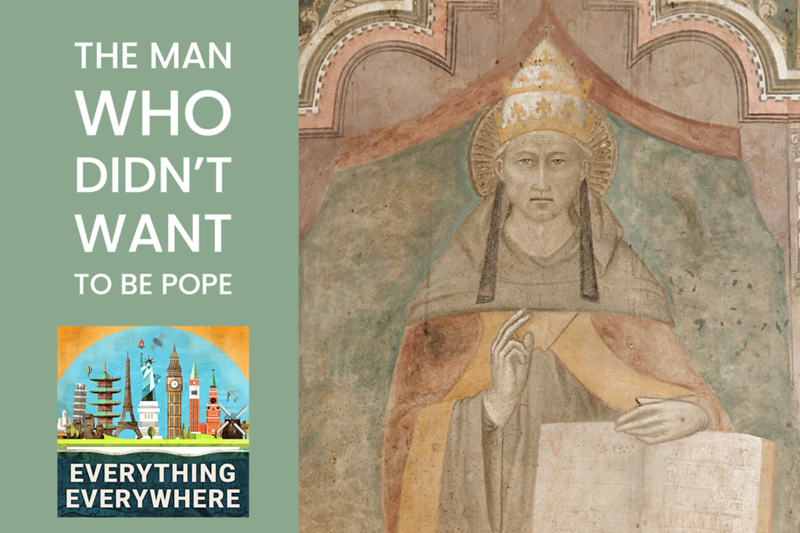 On February 10, 2013, in what began as a rather innocuous assembly, Pope Benedict the XVI stunned the world by announcing that he would be retiring.

Not only were people stunned, but to paraphrase King George in the Musical Hamilton, most people weren’t even aware that was something a pope could do.

Yet, it is something popes can do, and the precedent was set over 700 years earlier.

Learn more about Pope Celestine V, the man who really didn’t want to become pope, on this episode of Everything Everywhere Daily.

According to the official history of the Catholic Church, there have been 264 men who have served as the Bishop of Rome, aka the Pope.  Almost all of them have died while serving in that position.

Almost all, but not all.

In an earlier episode, I went over the process by which a pope is selected. Today it is known as a conclave. The cardinals will lock themselves in behind closed doors and debate and vote in secret to elect a pope.

However, it wasn’t always that way. In fact, the last time they didn’t do it that way led to the subject of this episode. Pope Celestine V, aka Pietro de Morrone.

The church was near the apex of its power. This was before the Protestant Reformation and Christianity has pretty much spread everywhere in Europe by this point, save for Lithuania.

That meant that the church and hence the papacy was a political football that the great monarchs of Europe fought over. This was especially true between Italy and France.

The 13th century saw many of the longest and most contentious papal election battles in history.

In 1268 Pope Clement V died and his replacement wasn’t chosen for almost three years. The election took so long that of the 20 cardinals who were there at the start of the process, three died and one resigned. The people of Viterbo, where the election was held, eventually locked the cardinals locked in the building they were meeting, began only serving them bread and water, and eventually took the roof off so that they would make a decision.

In 1271, Gregory X was selected as a compromise candidate.

Gregory X instituted a series of reforms to make sure that such an election never happened again.

In the 23 years after the election of Gregory X, there was a succession of popes with very short reigns. There were 8 over this period of time ending with Pope Nicholas IV in 1294.

And this is where the story starts.

Despite the attempts to avoid a papal election like the one from 1268-1271, it happened again.

There were 12 cardinals at the start of the election and one died soon after the process began.

The primary divisions were between two powerful Roman families: the Colonna and Orsini. Each family literally had two members as cardinals who were taking part in the election.

The Orsini family supported French claims in Sicily and the Colonna supported the Aragon claims to Sicily. Moreover, remember that back then, the Papal States were a thing, and the pope was the political rule of a larger part of central Italy, including Rome.

The cardinals would meet and get nowhere, and then adjourn and meet again somewhere else. This process continued for two years.

Meanwhile, Rome was devolving into a state of anarchy without a leader.

In the summer of 1294, the cardinals were meeting in the city of Perugia, still unable to elect a pope, when a message when sent to them from a hermit who lived on top of a mountain named Pietro de Morrone.

Morrone was probably well known to all of the cardinals in attendance. He was a very pious and saintly man. At the age of 17, he became a monk and at the age of 22, 55 years before the papal election, he retreated to a cave to live an ascetic life in the vein of John the Baptist.

While living as a hermit, he still found time to create a new branch of the Benedictine order. After the order grew and expanded, he willingly gave up control to return back to his ascetic life living on the top of Mount Morrone.

He was believed to have been 84 years old when he sent the letter to the cardinals.

In his letter, he chastised the cardinals and said that God would punish them if there was any further delay in selecting a pope.

In a moment of inspiration, one of the Orsini cardinals nominated Pietro de Morrone to become pope. None of the factions supported him, yet none of the factions were against him. Moreover, by electing an 84-year-old man, the oldest person ever to be elected pope, his papacy would probably be a short one, and it would get everyone off their back about not selecting a new pontiff.

The cardinals patted themselves on the back for such a brilliant idea.

Of course, this was all done without the consent of Morrone. He sent the letter as a stern warning to the cardinals, not as part of an election campaign.

Back in the election of 1268, the cardinals tried doing this same thing. They originally elected the hermit Saint Philip Benizi, who also wrote a letter to the cardinals at the time telling them to get moving. He was never elected because he fled so he could never get picked.

History repeated itself in 1294. When Morrone was notified of the election, he reportedly fled on foot and refused to go to meet the cardinals.

Eventually, an entourage consisting of the King of Naples and several cardinals went up to the mountain to convince him to become pope. He reluctantly agreed and took the name Celestine V.

His coronation was held in the town of Aquila, which was the nearest cathedral to his hermitage. Because not all the cardinals were able to attend, the ceremony was performed again, making him the only pope to be coronated twice.

As a pope, Celestine was pretty ineffectual. It turns out, living your entire life in a cave by yourself isn’t the best training for running one of the largest religions in the world.

He never actually made it to Rome. He spent his entire papacy in Naples under the thumb of King Charles II of Naples, who was a very close ally of the French King Philip IV. He never met with the Roman Curia, who was responsible for the day-to-day management of the church.

He appointed 12 cardinals, seven of whom were from France and three were from Naples. This was responsible for a massive swing in power for future papal elections, and in some ways, the century of the Avignon Papacy can be seen to have started here. I’ll leave that topic for a future episode.

He was really unhappy and he knew he wasn’t a very good pope. He consulted with one of his advisors, Cardinal Benedetto Gaetani about resigning and if it were possible. Cardinal Gaetani was trained as a lawyer, so he suggested creating a papal decree allowing for papal resignations before he resigned, to just make sure it was legit.

He then went back to his cave on the mountain top and lived happily ever after. The End.

Of course not. His advisor who suggested he resign, Cardinal Gaetani, was elected the next pope and took the name Boniface VIII. He then proceeded to throw Celestine in jail to avoid any issues of there being a living anti-pope that people could rally around.

Celestine died 10 months later still imprisoned. While legend holds that Celestine was kept in horrible conditions, in reality, he was kept in a castle with several attendants from his monastic order and could go anywhere on the grounds he liked.

A small hole in Celestine’s skull led to rumors for centuries that he was murdered, but there is no actual evidence for this.

On May 5, 1313, under the suggestion of Philip IV of France, he was declared a saint.

The only thing that history really remembers about Celestine V was the fact that he resigned. For centuries, there was a great deal of debate as to if the act was heroic or cowardly.

There is a passage in Dante’s book “the Inferno” which might be in reference to Celestine V. He wrote:

“I saw and recognized the shade of him who due to cowardice made the great refusal.”

It was written soon after Celestine V’s resignation and death, so many people believe the passage is about him.

Interest in Celestine V peaked after the resignation of Pope Benedict XIV when he became the first pope in 719 years to resign since Celestine V.

I’m sure if and when another pope resigns in the future, Celestine V will make another brief mention in the news, and this time, you’ll know more about the man who ran away when he was named Pope.