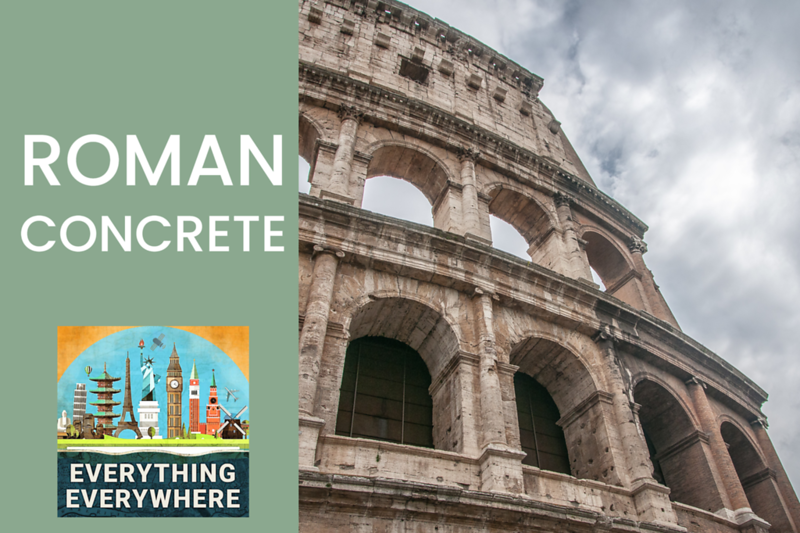 There are lots of stories about technologies and knowledge from ancient peoples that have been lost to us through history.

In reality, most things that were lost have been figured out independently by modern people, and we have better modern versions of almost everything the ancients had, including things like Damascus Steel.

That is, except for one thing.

Learn more about Roman Concrete, the stuff which has lasted over 2,000 years, on this episode of Everything Everywhere Daily.

Back in the ancient world, if you wanted to learn a skill you would have to spend years learning your trade from a master.

Today, we have Skillshare, which can help you get up to speed quickly. They have videos on almost every subject you can imagine, including things like designing your own furniture, milling your own lumber, and how to put shingles on your house.

Before you decide to skip this episode because you think the idea of talking about concrete is boring, realize this: for most of you listing to this podcast right now, there is probably concrete somewhere around you. If you listening in a car, then there is concrete on the road. If you are walking, then there might be concrete on the sidewalk. If you are in a building, there is probably concrete in the foundation or maybe in the walls.

Concrete might not get a lot of attention, but it is really important stuff. Modern civilization wouldn’t be possible without it.

While the Romans were great engineers and builders, they weren’t really great innovators. Despite existing for centuries, the Romans can’t really be said to have left us much in the way of technological advancement. Many of the things which they are best known for, such as aqueducts, weren’t actually Roman innovations. They got them from other civilizations such as the Etruscans.

However, there was one thing which they had that no one has been able to figure out or reverse engineer for over 2,000 years: Roman Concrete.  The Latin word for it was opus caementicium, and it was a particular blend that was used to create many of the structures which are still standing, and in some cases are in use, today.

We should start our discussion with the difference between concrete and cement.

The two terms are often used interchangeably today, but they are different things. Concrete is a mix of aggregates such as rocks or sand, and a paste. Cement is an ingredient in concrete and is part of the paste. Cement, which in its modern form is called Portland cement, usually has a base made out of lime and is mixed with water to create the paste which holds the aggregate together in concrete.

Today there are different types of concrete depending on what your needs are. There is concrete that will dry fast, concrete that can harden underwater, and concretes with different load-bearing properties.

So, what was so special about Roman concrete?

Basically, it was really durable. Modern concrete is pretty good, but over time micro-fissures will develop, these will expand, and over decades the concrete will crumble. You’ve probably seen examples of crumbling concrete at some point, be it on a building, a road, or a bridge.

Roman concrete didn’t do that, at least not as easily. If you go and visit Rome, the dome over the Pantheon and the triumphal arches you’ll find in the forum are in almost perfect condition. Whereas many other structures have fallen down from earthquakes over the last two millennia, many of the structures which have stood are made out of Roman concrete.

What was even more impressive was how it worked in seawater. Concrete tends to decay much faster in seawater than on land. However, Roman concrete didn’t suffer from this. In fact, it got stronger the longer it was in seawater, which is totally counter-intuitive.

Probably the best-preserved example of Roman concrete used in seawater can be found in the ancient port city of Caesarea in Israel. Built by Herod the Great, the breakwaters used in its harbor are still intact today, over 2,000 years since its construction.

Pliny the Elder wrote in his book Naturalis Historia around the year 79 that Roman concrete, “as soon as it comes into contact with the waves of the sea and is submerged, becomes a single stone mass, impregnable to the waves and every day stronger.”

So what do we know about it exactly, and what makes it so good, and why were we unable to make it for so long?

The answer last question is, we lost the recipe.

The great Roman architect Vitruvius, wrote down what little we know about Roman Concrete. His tretise Ten Books on Architecture, is really the only surviving text on architecture and building from the ancient world and spells out the basic ingredients in Roman concrete.

There were three components to Roman concrete: lime, an aggregate, which was usually rocks, and the third was something called pozzolana which is volcanic ash that comes from a particular spot near Naples.

This specific ash was the key to Roman concrete. Before when I mentioned the harbor at Caesarea, Herod the Great imported 44 shiploads of pozzolana, at 400 tons per shipload, to complete the project.

So, believe it or not, much of the Roman success in building came from the fact that they just happened to live next to the perfect material for concrete. The recipes they developed over time was through trial and error.

What they didn’t know was why it worked. Thankfully, modern researchers have finally figured out what made Roman concrete work so well, especially in seawater.

Normally, when micro-fissures develop in concrete, it is the start of the process which will eventually lead to its destruction. Over time the fissures get larger and at some point, the concrete will start to crumble. In seawater, the process is accelerated.

However, the unique mixture of Roman concrete in seawater causes something else to happen. When water enters the micro-fissures in the concrete, it stimulated the creation of a mineral called Aluminum tobermorite. This mineral grows and fills in the gaps in the concrete making the structure harder and more solid over time.

Aluminum tobermorite is actually a rather rare mineral that usually only forms at high temperatures. But, it also just so happens to slowly form over time with Roman concrete.

As we are learning more about the secrets of Roman concrete, it might just hold the key to making better concrete today. It turns out that Roman cement used less lime than the Portland cement used today. This is important because cement production, and the heating of lime, is one of the largest emitters of CO2 on Earth. A more Roman-like concrete would actually require less energy.

Moreover, a good substitute for the natural volcanic pozzolana found in Italy is fly ash from coal-burning power plants.

We haven’t reverse engineered the exact recipe for Roman concrete yet, but we are getting close. By studying this 2,000-year-old concrete we are unlocking its secrets and we might use this information to recreate this ancient formula or maybe even make something better.

Great underrated podcast, worth all the support. I wish I can support through Patreon, unfortunately, I live in a third world country torn apart by wars and conflict. Please keep it up!

Thank you, Abdullah! Helping spread the word is a great way to support the show and I absolutely appreciate it.

Thanks to all of you who have left reviews and support the show over on Patereon.com. Your support helps me produce a new show every single day.