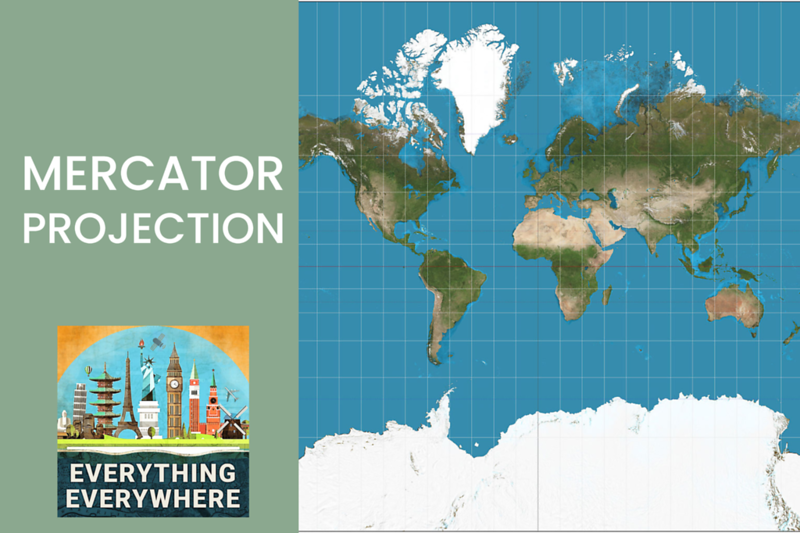 Have you ever looked at a map and said to yourself “Wow, Greenland is really big!”, only to then look at a globe and realize, that Greeland wasn’t actually that big?

If so, then you have discovered the Mercator Projection. A map that was originally created in 1569 and is still with us today.

Learn more about the Mercator Projection, its problems, and its benefits, on this episode of Everything Everywhere Daily.

It comes as no surprise that, as a kid, Jeopardy! legend Ken Jennings slept with a bulky Hammond world atlas by his pillow every night. Maphead recounts his lifelong love affair with geography and explores why maps have always been so fascinating to him and to fellow enthusiasts everywhere. Jennings takes listeners on a world tour of geogeeks from the London Map Fair to the bowels of the Library of Congress, from the prepubescent geniuses at the National Geographic Bee to the computer programmers at Google Earth.

Before we get into the Mercator Projection we first need to establish what a projection is.

Imagine you have a large flat sheet of paper and you wrap it around a globe which is made of glass, except that you can’t see through the parts of the globe which represent land.

The paper you wrap around the sphere will become a cylinder and only touch the globe at the equator. Now imagine that there is a light in the middle of the globe and casts shadows onto the paper.

The shadows which are cast onto the paper would be a projection of the globe.

At the equator, the shadow would be just like the globe. However, as you went up the paper and shadows from higher latitudes are cast, they would get bigger and bigger compared to the size on the globe. The polar regions wouldn’t even appear on the map because the light would go straight up.

There are many ways you can project a sphere onto a cylinder, however, all of them are going to fail in some respect. You will either distort size, shape, or angles.

This brings us to Gerardus Mercator. He was a Flemish mapmaker who in 1569 set to create a map that would be useful for navigation. Cartography back then wasn’t very good. People didn’t know what land existed or its general shape. Moreover, they had no idea how to determine longitude.

What Mercator did, really for the first time, was an attempt to systematize what was on a globe with what was on a map. He tried to make a mathematical projection.

He wanted a map that would preserve angles. That way if a navigator on a ship drew a line that went southwest on the map, that is where they would actually windup. A 90-degree angle on the map would correspond to a 90-degree angle in the real world.

Mathematically, the Mercator Projection is the ONLY cylindrical projection which allows for conformity with angles, and constant rhumb lines, also known as bearing lines, across all meridians. That is why it is so good at navigation.

It really was a remarkable innovation. As maps and knowledge of landmasses improved, the maps got better, but the projection technique remained because it worked so well for navigation, which was the primary purpose of having maps.

Just as an aside, Mercator was also the person who coined the term “atlas” as a book with a collection of maps.

The reason for this is that when you use a map on your smartphone, you want it, as much as possible to resemble what an aerial photo might look like. For example, if a city block is a square, then you want it to be a square on your map. The Mercator Projection does this splendidly.

You have probably have noticed, as I mentioned in the introduction, that there is a problem with the Mercator Projection.

While the Mercator Projection is great for navigation, it fails at…..well….just being a wall map.

While it does a great job of preserving angles, it doesn’t preserve size. That is why Greenland looks as big as Africa on a Mercator Projection map, even though in reality Africa is 14.5 times larger.  Ellesmere Island in Canada looks to be as large as Australia, but in reality, Australia is 39x larger.

Likewise, the island of Svalbard in Norway looks larger than Borneo, but in reality, Borneo is 12x larger.

Most wall maps that were created for classrooms or libraries used the Mercator Projection because that was the map that was used for commerce and the military.

Most Mercator wall maps, if you look closely, do not have the equator in the middle of the map. That is because the one thing which is even larger than Greenland is Antarctica.

Antarctica is actually infinitely large, so most maps will cut off all but the coastline, and shift the equator farther down.

There have been projections created which preserve size. The best-known one is called the Gall-Peters Projection. This was originally created in 1855 by James Gall and then recreated in 1970 by Arno Peters.

Unlike the Mercator Projection, the Gall-Peters projection is an equal-area projection. On this map. Africa is much larger than Greenland, which reflects reality.

However, as I noted above, whenever you do a projection from a sphere onto a surface, something has to give. In the case of the Gall-Peters Projects, what is sacrificed is shape.  In a Gall-Peters map, everything is the right size, but things at the equator are elongated and things closer to the poles are smushed.

Advocates of the Gall-Peters map claim that it is fairer than the Mercator Projection because every country is the appropriate size, and that is true, but to almost everyone that looks at it, it just looks……odd.

Is there a way that we could satisfy both area and shape? If we do a projection onto a cylinder, the answer is no.

…but, who says we have to project onto a cylinder?

There are many flat maps that get around this problem by avoiding making the map a rectangle.

In fact, once you stop projecting onto a cylinder, there are all sorts of things you can do.

You can do a polar projection with the north pole at the center of the map. This is what is used on the United Nations logo.

Buckminster Fuller created a map called a Dymaxion map which treats the world as an icosahedron, then unfolds it into a collection of triangles. It preserves area and shape but has gaps between continents.

Probably the best world wall maps are called Pseudocylindrical. They project the earth onto an oval with the top and bottom parts flattened. They do a good job of preserving both size and shape.

National Geographic has taken this approach with its world maps over the last several decades. In 1922 they began using the Van der Grinten projection which projects the globe onto a circle. This was replaced in 1988 with the Robinson Projection, which is more of an oval, and then in 1998 with the Winkel tripel projection, which is what they use today.

On my personal travel website, I use dozens of maps. For the world map, I use a projection called the Kavrayskiy VII projection, which is similar to the Winkel tripel projection. However, for individual countries or states, I use the Mercator Projection, so they don’t look distorted.

So, the Mercator Projection is a very useful map. It is pretty much the basis of all the navigational mapping which is what you use when you get directions on your smartphone or on your computer. It works great for getting directions across town.

However, it isn’t perfect. When you zoom out to see the entire Earth, its flaws become evident. If you want something to display the whole world, your first choice should be to get a globe, and if you want something to hang on the wall, then get a non-cylindrical projection like the Winkel tripel or the Robinson. It’s a good compromise.

Love little bursts of historical information Easy to remember as they are told in a great story line and not long and drawn out I listen to many historical podcasts on many subjects and this is one of my new favorites.

Thank you, zpic, and thanks to all of you who have left reviews. Remember, if you leave a 5-star review, you can have your review read on the show.