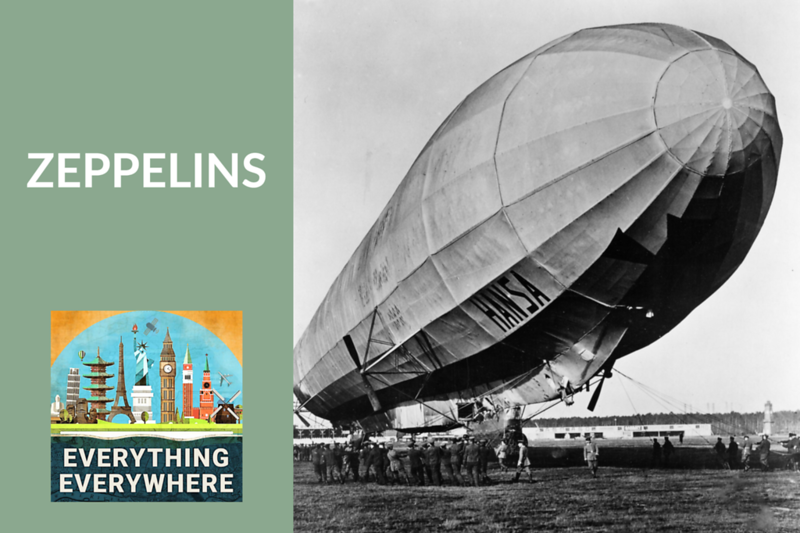 Airplanes were not the first type of aircraft. Lighter than air airships were flying decades before the Wright Brothers flew their first airplane.

Of all the airships, there was one company that became so successful in airship development and construction that their name became synonymous with the rigid airship.

Learn more about zeppelins on this episode of Everything Everywhere Daily.

The history of human flight didn’t start with airplanes. Not surprisingly, it started with hot air balloons.

On September 19, 1783, the Montgolfier Brothers took the first human flight in a hot air balloon. The balloon was tethered to the ground and they got about 85 meters or 275 feet in the air.

The problem with hot air balloons was and is, that you have no control over where you go. You are totally dependent on the direction the wind blows.

Moreover, it wasn’t until after World War II that the modern hot air balloon, with an onboard heat source, was invented. Prior to that, the first hot air balloons had to be inflated with fires on the ground.

Not surprisingly, the hydrogen-filled balloon went much higher than the first hot air balloon.  Jacques Charles, Anne-Jean Robert, and his brother Nicolas-Louis Robert took the first hydrogen balloon to 1,800 feet or 550 meters, and the flight went over 2 hours and traveled 35 kilometers.

After the balloon landed, Jacques Charles went back up again by himself, having jettisoned the ballast of two other people, and shot up to 3,000 meters in a matter of minutes.

For decades, this technology was a curiosity.

The story of the creation of actual airships which could be used as transportation began during the US Civil War.

A young Prussian army officer, Count Ferdinand von Zeppelin, was sent to the United States to be an observer of the Union Army during the war. Many European countries sent observers to both sides of the conflict to get an appraisal of fighting tactics and military technology.

After the war, the count went on a trip to Minnesota where he canoeed on the Mississippi River, traveled to the shore of Lake Superior, and visited the state capital in St. Paul. There, he met a German balloonist who took him on his very first flight.

That flight lit a spark that would stay with him his whole life.

He returned to German and led a distinguished military career. However, he never forgot about his flight.

In 1874, he wrote a diary entry that outlined his idea of a larger, rigid framed airship with separate gasbags. The basic idea which he would implement years later.

In 1887, the La France, an airship created by the French Army, became the first aircraft to launch and travel a predetermined route, and land back where it started. The airship was a non-rigid ship with electric motors

Zeppelin wrote a letter to German officials to point out the strategic importance of the technology and to highlight that Germany was falling behind with no airship industry of their own.

In 1891, at the age of 52, he resigned from the military to devote himself to realizing his dream of creating airships.

He hired an engineer and began work designing his rigid airship.

Here I should take a bit to explain some of the terminology surrounding airships. A blimp is a non-rigid airship. The Goodyear Blimp is an example. It is literally just a giant bag of gas like a balloon, only it has a gondola and it can be controlled. The shape of the blip is set by creating higher pressure inside the gas bag, than in the atmosphere.

A rigid airship has an internal skeleton, usually made of metal. The shape is determined by this structure, not by overpressuring the gasbags. Rigid airships can be much larger than blimps, and they are usually called Zeppelins, named after the man who first built them, Count Ferdinand von Zeppelin.

Zeppelin went to work on the creation of their first prototype. As with most start-up companies today, their first years were taken up with fundraising, filing patents, and getting government approval.

It took 9 years, but on July 2, 1900, the first Zeppelin, the LZ 1, finally flew. The LZ stood for Luftschiff Zeppelin, or Airship Zeppelin.

The LZ1 was the first real zeppelin.

It only flew for 20 minutes on its first flight and didn’t really go anywhere.  It had a second flight where it did beat the performance records of the La France, but it didn’t perform well enough to convince investors to put in more money.

The company was liquidated, with all of the assets being purchased personally by Count Zeppelin.

The dream of airships wasn’t dead, however. A lottery was issued to raise money, and Zeppelin invested everything he had, including his wife’s estate into the project.

They salvaged all of the parts of the LZ2 to make the LZ3. With the LZ3, finally, the German military was interested. However, they had a requirement before they would make a significant investment.

They needed to show that the airship could operate for a full 24 hours.

The LZ4 managed to fly across Lake Constantine, and go all the way to Zurich. Along the way, it garnered enormous public attention and tens of thousands of people saw it fly. It was in all of the newspapers.

It managed to go 240 miles, demolishing every airship record. Unfortunately, it crashed and burned, but it had captured the public’s attention.

Donations flowed in from everywhere in Germany. Over six million marks were sent to the count which allowed him to start a new company, the Luftschiffbau Zeppelin Company.

From here, the company began producing zeppelins in earnest. They began offering tours to the public, most of whom would have never flown in the sky before.

Many of the zeppelins managed over a thousand flights and carried many thousands of passengers. The biggest problem they still faced was high winds, which they usually couldn’t overcome given the state of engines in the early 20th century.

During WWI, zeppelins were used for both reconnaissance and bombing. The bombing missions were mostly for propaganda as they really couldn’t carry a large payload. It wasn’t anything even remotely close to the type of bombing you’d see in the second world war.

Paris, Antwerp, Warsaw and even London were bombed by zeppelins.

This was a totally unique form of warfare that had ever been conducted in world history. Dropping bombs from the sky had never happened before. It required the development of countermeasures, such as blacking out cities, using searchlights to spot zeppelins, and developing anti-aircraft weapons.

The main use of zeppelins, however, was naval reconnaissance. They could be thought of as an early form of radar to let ships know what was just over the horizon.

The war greatly accelerated zeppelin technology. Engines got better, zeppelins got bigger, and they were able to fly higher and faster.

At the end of WWI, the terms of the Treaty of Versailles explicitly stipulated that Germany could not develop airships, and their remaining airships had to be handed over to the allies. Prior to the final signing of the treaty, the German military scuttled most of their zeppelins.

Count von Zeppelin died in 1917 and after the war, the company was put into the hands of one Dr. Hugo Eckener.

Eckner was a big believer in airships as a tool for peace. He wanted to find ways to circumvent the treaty to keep building zeppelins. He eventually found a way when his company won a contract from the United States Navy. The zeppelin would count towards the payment of Germany’s war reparations.

In 1924, the LZ126 was launched and it became the first aircraft to cross the Atlantic. When the Navy took possession, it was renamed the USS Los Angeles, and the hydrogen gas was replaced with helium.

With the loosening of treaties, the company began to make its next, and greatest ship. The LZ 127 was dubbed the Graf Zeppelin.

The Graf Zeppelin ushered in the golden age of zeppelins. It was the largest zeppelin ever built at 236.6 meters or 776 feet long.

It was designed to be a commercial passenger ship. It operated from 1928 until 1937, and it had a spotless safety record.

During its lifespan, it flew 590 flights and had over 17,000 hours of flight time. It was the first commercial passenger flight across the Atlantic. It ran regular runs from Berlin to Brazil.

In 1929, it circumnavigated the globe. In 1930 it flew to the Arctic. It was far and away, the most successful commercial zeppelin in history.

However, given his position, he was left alone. He was, however, stripped of his position when the Zeppelin company was nationalized, and it was mostly used for propaganda purposes.

The next zeppelin built after the Graf Zeppelin has become infamous. Originally given the code LZ129, it was later named the Hindenburg, named after former German President Paul von Hindenburg.

The Hindenburg remains to this day the largest flying object in human history.

Originally, it was supposed to be inflated with helium, but the Germans had no access to helium. The United States had the majority of the world’s supply, and they refused to sell to the Germans, so they were forced to use hydrogen.

It was destroyed in a very spectacular and public fashion on May 6, 1937, after completing a transatlantic voyage.

The Hindenburg disaster is worthy enough for its own episode, but it will suffice to say that it marked a very emphatic endpoint to the age of zeppelins.

With the onset of World War II, zeppelins served no use. They were too slow, and they were sitting ducks to the new faster aircraft with incendiary ammunition.

The last zeppelin was the Graff Zeppelin II which was launched in 1938, and it was in service for less than a year before it was grounded. In 1940, all of the remaining zeppelins were scrapped for material for the German war effort.

Hugo Eckner, believe it or not, survived the war, despite being an outspoken Nazi critic. He died in 1954.

The Zeppelin company still exists today. It was revived in the 1990s and today makes semi-rigid airships, which are much smaller than the zeppelins of old. The flagship Zeppelin NT is currently in use by the Goodyear corporation for their entire fleet of blimps.

There are a few airships in use, mostly for promotion, and occasionally for industry use. However, the age of lighter than air passenger travel is probably gone, never to return again.

Associate Producer of Everything Everywhere is Thor Thomsen.

If you would like to support the show please donate over on Patreon.com. There is content only available to supporters, merchandise, and even opportunities for a show producer credit.

If you know someone you think would enjoy the show, please share it with them.

Also, remember, if you leave a five-star review, I’ll read your review on the show.