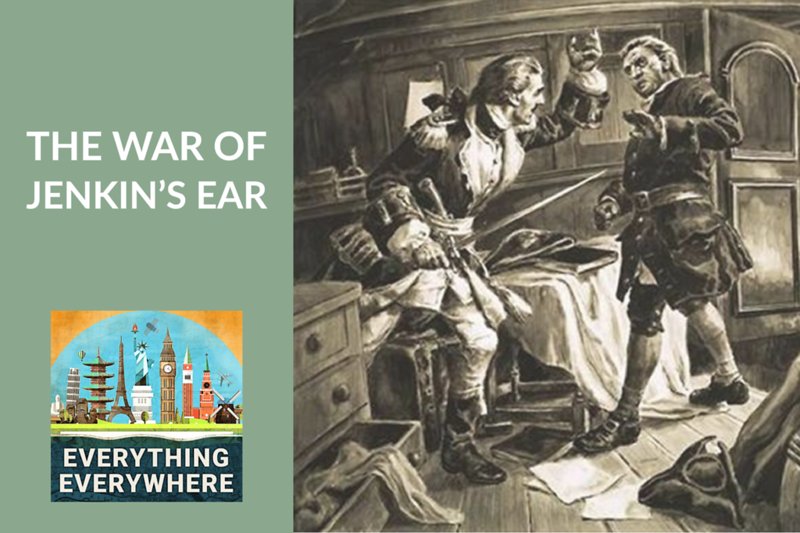 Throughout history, there have been many causes for wars. Surprise attacks, broken marriages, unpaid debts, and even, of course, good old greed.

However, an 18th-century war between Great Britain and Spain had perhaps the oddest genesis of all: a severed ear.

Learn more about the War of Jenkin’s Ear on this episode of Everything Everywhere Daily.

There is a host of new content out of CuriosityStream that you should check out.

The Man No One Knew, about CIA spymaster William Colby.

D-Day: Wings of Victory, which is about the role aircraft played in the invasion of Normandy.

and Ancient Yellowstone, which goes over the geological and biological history of the world’s oldest national park.

Great Britain has been in a LOT of wars. Of the 193 countries in the United Nations, they have controlled, fought in, or against 171 of the countries….and that is just since 1707.

By the same token, Spain has also been in a lot of wars. Not quite as many as the UK, but still a lot.

So, it shouldn’t come as any surprise that the two countries fought against each other. Several times in fact.

The particular war in question took place in the 18th century. The backdrop was the economic and military competition between the two countries in the Caribbean.

In the 18th Century, the Caribbean was big business. Sugar, molasses, rum, indigo, rice, and other crops brought in enormous amounts of money to the colonial powers back in Europe.

All of this, of course, was done on the back of slave labor which was imported from Africa.

This last point, about slave labor, was actually an important part of this war.

In 1713, after the War of Spanish Succession, in the Treaty of Utrecht, the British were granted the right to import 5000 slaves per yet into Spanish ports as well as two ships per year carrying 500 tons of goods.

In the 1729 Treaty of Seville, the Spanish were given the right to inspect British trading ships to ensure that the British were honoring the treaty terms.

Over time the Spanish became suspicious of the British, and they began exercising their rights to board ships.

The event which sparked the war and gave it its name occurred in 1731 off the coast of modern-day Florida.

The British trading ship Rebecca was boarded by the Spanish patrol boat La Isabela. The Spanish ship was looking for contraband goods which might be headed to Spanish markets.

After an argument on the ship, the Spanish captain Fandiño drew his dagger,  cut off the ear of Captain Jenkins, and said, “Go, and tell your King that I will do the same if he dares to do the same.”

At this point, you might think that with Captain Jenkins having lost his ear, and with such a thing as “The War of Jenkins’ Ear”, the two countries must have rushed to war over the incident.

In fact, the entire incident was forgotten for years.

In 1732, Britain established the colony of Georgia which bordered the Spanish colony of Florida. This led to an increase in tensions between the two countries.

These tensions only increased when in 1733, Louis XV of France and his uncle Philip V of Spain signed a treaty to form an alliance between the two countries.

With increased harassment of British ships, the British were looking for an excuse for war.

In 1738, Robert Jenkins was asked to testify in parliament and show the ministers what was left of his ear.

The next year, 1739, the British declared War against Spain, a full eight years after Robert Jenkins lost his ear.

Both Britain and Spain assumed that with the commencement of the war, that France would join the side of Spain. However, that didn’t happen. France remained neutral.

However, this threat of French involvement hung over the next several years. Britain had an advantage over the Spanish on the sea, but that advantage would evaporate if France and Spain were to combine their fleets.

This fear meant that the British held most of their fleet close to home from 1739 to 1742.

There was a fear of a joint Spanish/French invasion of the island.

Over in the Caribbean, there was a series of skirmishes and battles.

The first of these was the British capture of Portobello, in what is today Panama.

Prior to this, the Spanish conducted all of their trade from the Americas to Spain twice a year, with all of their ships assembling in only two ports: Portobello and Veracruz. They would then sail to Cadiz in a giant flotilla for protection.

However, that meant you only had to attack these two ports to completely disrupt Spanish shipping.

In November 1739, the British took Fort San Jeronimo in Portobello and held it for several weeks, destroying its fortifications and ability to protect shipping.  This forced the Spanish to abandon their shipping policy of two massive fleets per year, and they moved to more frequent ships sailing from more ports.

It was considered a huge victory back in Britain, and the song “Rule Britannia” was written in celebration.

They then attempted to attack the Spanish fortification in Cartehania, in what is today Colombia, but they were repelled.

They turned their attention back to Panama where they destroyed the fortress of San Lorenzo el Real Chagres.

In 1740 and 1741, they tried two more times to take Cartehania but were unsuccessful.

An expedition led by Commodore George Anson set out to capture Spanish possessions in the Pacific.  The expedition took three years, resulted in a circumnavigation of the globe, and the capture of the Spanish gold galleons which traveled between Acapulco and Manila.

The whole Mexican/Philippines trade route is an interesting subject and probably worth an episode in the future.

The other front of the war was between Georgia and Florida. In 1740, British settlers in Georgia led a raid into Florida and laid siege to the town of St. Augustine. After a month, they gave up and returned home.

Likewise, there were Spanish raiding parties that went over the border into Georgia as well in 1742. None of the efforts by either the Spanish or the British on the mainland were successful.

By 1742, the War of Jenkins’ Ear had more or less merged into the War of Austrian Succession which was much larger and more widespread on the European continent.

With the death of Philip V of Spain in 1746, the new Spanish King Ferdinand VI was far more favorable towards Britain. With the resolution of the War of Austrian succession, Spain and Britain signed the Treaty of Madrid which resolved their outstanding trade issues.

The War of Jenkins’ Ear is mostly forgotten save for its very unique name, which is only described that way in English. There wasn’t much of a lasting impact on either side.

The only place which still honors the war is at the Wormsloe Plantation Historic Site in Georgia, where one of the Spanish Raids into Georgia took place. They celebrate the war on the last Saturday of May every year.