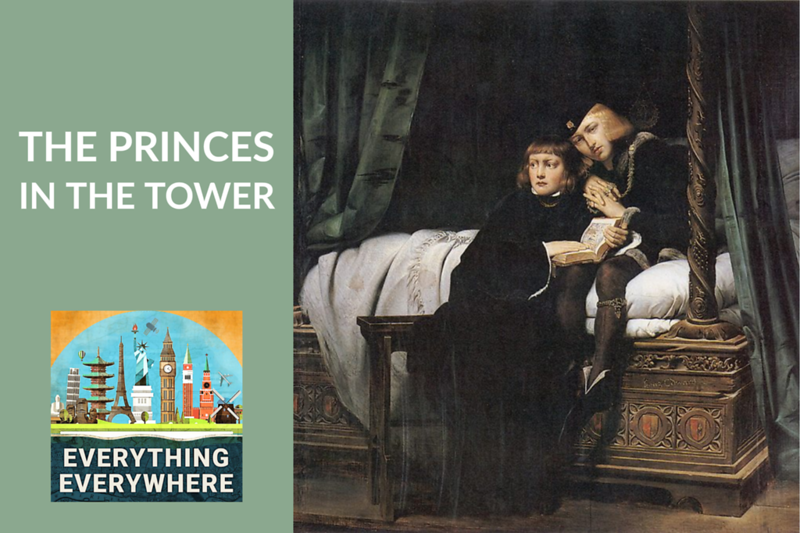 In 1483, the King of England, Edward V, and his brother were taken into custody by his uncle Richard the Duke of Glouster and placed into the Tower of London.

Both the king and his brother were never seen again. They just….disappeared.

It is probably the greatest unsolved mystery in British History.

Learn more about the Princes in the Tower on this episode of Everything Everywhere Daily.

I don’t know where you live, but here it is finally starting to get warmer.

That means I can change out of my heavy winter Scottevest coat and wear my lighter Scottevest hoodie. I can slip my Macbook Air in its internal pocket, and go work somewhere just to get out of the house.

I can put everything I need to be productive including my phone and cables in my pockets and not have to worry about carrying a bag.

The year 1483 was a very consequential one for England.

The country was still embroiled in the War of the Roses, a civil war between two houses, the House of York and the House of Lancaster,

The king at the start of the year was Edward the IV. He had ascended to the throne in 1461, replacing the Lancaster king Henry VI, ruling for almost 10 years. He was removed himself by Henry VI for 191 days before capturing the throne once again and ruling for another 12 years.

Save for the 191-day interregnum, Edward IV reigned for 22 years.

Despite a rather lengthy reign, he was only 40 years old when he died.

Upon his death on April 9, 1483, the throne was passed to his son, the Prince of Wales, Edward, who became Edward V.

This is where our story starts.

Edward V was only 12 years old when he ascended to the throne.

As is the case whenever a child ascends to the monarchy, they are not given their full powers. They have a regent who rules in the name of the monarch until the monarch comes of age and can rule in their own right.

The regent for Edward V was his uncle, Richard the Duke of Gloucester. Most of you probably know him better by his regal name, which was made famous by William Shakespeare, Richard III.

There is very little good which history has to say about Richard III. Much of this is due to how he came to power.

When Edward IV died, young Edward V was at Ludlow Castle near the Welsh border.

Richard was in York to the north. Their plan was to meet up and enter London together.

On April 29, now 20 days after the death of the king, they met in the village of Stony Stratford northwest of London.

Edward was traveling with a group that included his uncle and half-brother.

When they met up with Richard, he immediately arrested Edwards entire retinue and sent them Pontefract Castle in Yorkshire. More of them later.

Richard then personally took Edward into London and took him to the Tower of London, which was the traditional location where monarchs stayed before they were coronated. Edward entered the tower on May 19.

Edward was then joined by his 9-year-old brother Richard, who was also the Duke of York.

Usually, a coronation ceremony would take place when a monarch reached an age when they could rule in their own name. However, on occasion, younger monarchs would be crowned which would eliminate the need for a regent. They would just rule with guidance from their close advisors.

Given the circumstances of the still incomplete War of the Roses, there was pressure to commence with a coronation for Edward as quickly as possible.

Richard, however, kept delaying the coronation.

The original date was going to be June 25, but Richard had postponed it indefinitely.

A theologian named Ralph Shaa, who was the brother to the Mayor of London, claimed that Edward was not the legitimate king because his birth was illegitimate. According to Shaa, Edward IV was contracted to marry Lady Eleanor Butler. Instead, he went and married Elizabeth Woodville, the mother of Edward V and Richard, Duke of York. This prior contract meant that the marriage between Edward IV and Elizabeth Woodville was invalid, and hence, Edward V was not legitimate and couldn’t be king.

The real king should be the person next in line, the oldest brother of Edward IV, which was, surprise, Richard.

This argument was incredibly flimsy. An engagement or a contract to get married is not the same as a marriage. No one at the time considered this to be the case, and it was something which Richard concocted after the fact.

On June 25, a group of lords and nobles approached Richard asking him to take the throne, which he did the next day. On June 26, he was proclaimed Richard III, King of England.

The next year in 1484, he pushed through a law in parliament called the Titulus Regius which confirmed the illegitimacy of Edward V and confirmed him as king.

Edward’s uncle and half-brother that was arrested and sent to Pontefract Castle in Yorkshire? They were beheaded.

But what happened to Edward and his brother Richard?

The answer is, no one knows.

Once they entered the Tower of London, no one ever saw them leave. There was never an official investigation, nor was there any organized search for them.

The last evidence we have came from an Italian friar named Dominic Mancini. He was in London during this period and he wrote that the boys were taken to the inner apartments of the tower and were seen less and less over the course of the summer.

Given the behavior of Richard, it doesn’t take Sherlock Holmes and the Case of the Missing Princes to figure out what probably happened, and who was responsible.

Throughout history, almost everyone has pointed the finger at Richard for having given the order to have the young princes killed, to remove any claimants to the throne.

Most famously, Sir Thomas Moore, during the reign of Henry VIII, wrote a history of Richard III which put the blame for the murders squarely at his feet. He identified Sir James Tyrrell, a loyal follower of Richard, as the murderer. Rumor has it, he confessed to the murder in 1502, before he was executed for treason. Supposedly the boys were both suffocated with pillows and then buried at the foot of some stairs in the tower.

In 1674, almost 200 years after the disappearance of the princes, a wooden box was found underneath the stairs in the Tower of London while renovation work was being done. The box contained the bones of two boys of appropriate age, and were declared to be the bodies of the boys and were placed in a reliquary that now sits in Westminster Abbey.

Over 500 years since the princes disappeared, there has been no real hard evidence that has been found. There haven’t even been DNA tests done on the bones which were found in 1674.

The closest thing to evidence that has come forward recently is corroboration that Sir Thomas Moore may have personally known some of the players who were around during the ascension of Richard III. If that is the case, then his account of what happened might have been based on actual testimony from witnesses or at least second-hand hearsay.

As for Richard, he was killed in combat just three years later at the Battle of Bosworth, ending the War of the Roses.

Henry VII, who became king at the death of Richard III, married Elizabeth, the sister of Edward V and Richard Duke of York. It was this marriage that gave his reign the legitimacy which came from Edward IV.

The first act of parliament under Henry VII was the repeal of the Titulus Regius act, which once again made all of the children of Edward IV and Elizabeth Woodville, legitimate. He ordered every copy of the law to be destroyed, and the only surviving copy which has ever been found was a century later in a monastery.

Henry himself never investigated the case too deeply, because if it had turned out that the princes had survived and were found alive, it would threaten his crown just as much as it had Richard’s.

I just found this podcast recently and am really, really enjoying it. I’ve been working my way up from the first episodes and haven’t been disappointed or bored by one yet. I give this six stars, five that you can see and one more for saying ‘merchandise’ not that silly ‘merch’!

Thank you Bets for the rev of my pod, and I’m more than happy to not say ‘merch’.