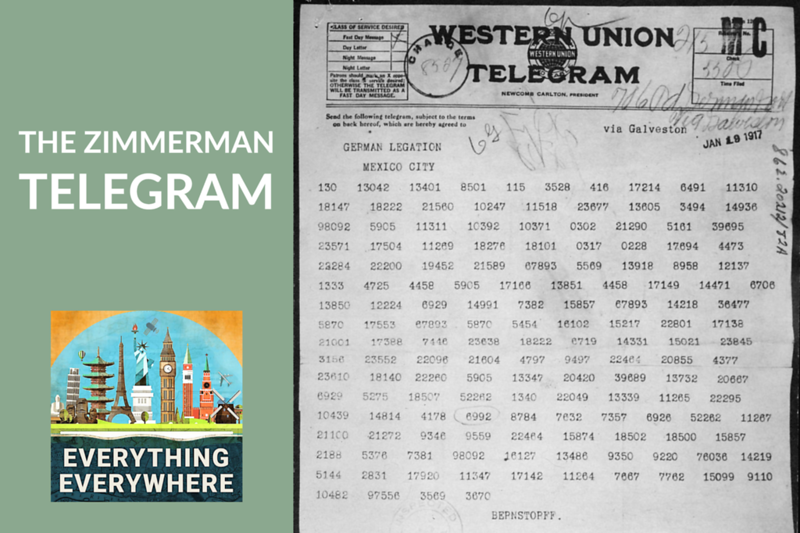 In 1917, British Intelligence intercepted a diplomatic telegram between Germany and Mexico.

The contents of the telegram contained information that had the potential to change the course of the First World War.

Not only was it an important turning point in World War I, but it was also one of the first successful signal intelligence operations in world history.

Learn more about the Zimmerman Telegram on this episode of Everything Everywhere Daily.

My audiobook recommendation today is The Zimmermann Telegram by Barbara Tuchman.

In the dark winter of 1917, as World War I was deadlocked, Britain knew that Europe could be saved only if the United States joined the war. But President Wilson remained unshakable in his neutrality. Then, with a single stroke, the tool to propel America into the war came into a quiet British office.

To give some background, the United States studiously tried to stay out of World War I.

In fact, it had pretty much been a standing policy to avoid European wars since the country was founded.

George Washington said in his Farewell Address, “It is our true policy to steer clear of permanent alliance with any portion of the foreign world”

Thomas Jefferson said in his first inaugural address, “Peace, commerce, and honest friendship with all nations-entangling alliances with none.”

In the 1916 presidential election, the main issue was that of war. The huge war going on in Europe and the civil war which was raging south of the border in Mexico.

The official US policy was neutrality and the biggest campaign slogan for Woodrow Wilson was “He kept us out of war”, which would turn out to be really ironic.  Wilson comfortably defeated Republican Charles Evans Hughes, who, fun fact, is the only sitting supreme court justice ever to have won a party’s nomination for president.

The American public didn’t want to get involved in the war, but they did lean towards the Allies. The German’s were targeting American shipping and they had sunk the passenger ship Lusitania.

The British and the French desperately wanted the United States to enter the war…..on their side.  The troops and equipment that the US could bring to the war could be decisive in the stalemate meat grinder that the western front had become.

By the same token, the Germans desperately did not want the United States to enter the war. They were willing to go to great lengths to make sure that didn’t happen.

Also, the last several years had been tense between the United States and Mexico. The US had occupied the Mexican city of Veracruz in 1914, and the US Army was chasing down Poncho Villa who had been running raids across the Mexican border.

It was in this environment that the following events took place.

In January 1917, the German diplomatic service needed to send a message to their embassy in Mexico. With the outbreak of the war, the British had cut all of the German international telegraph cables, so the Germans had to rely on neutral countries to communicate with their diplomatic staff overseas. The countries they used, in this case, were Sweden and the United States.

The Germans gave an encoded message to the Americans to be passed along to their embassy in Mexico City.

The Wilson administration had agreed to serve as an intermediary for the Germans to show support for American neutrality, and to keep diplomatic channels open for a negotiated peace which is what Wilson hoped for.

However, the cable didn’t go directly from Denmark to the US. It first went through a part of the southwest corner of England where the signal was boosted to make the transatlantic trip.

All of the messages which passed through England were intercepted by a group in the British Admiralty known as Room 40.

Room 40 was created at the start of World War I for expressly this purpose. They were one of the first organizations dedicated to signal analysis and cryptography.

Unbeknownst to the Germans, the group in Room 40 had been decrypting most German coded messages for the majority of the war. They had gotten their hands on many of the codes which the Germans had used from allies and captured documents around the world.

Room 40 had mostly decrypted the telegraph by the next day.

The content of the telegram was astonishing and had the potential to completely change the course of the war.

As the telegram was rather short, I’ll read it in its entirety.

We intend to begin on the first of February unrestricted submarine warfare. We shall endeavor in spite of this to keep the United States of America neutral. In the event of this not succeeding, we make Mexico a proposal of alliance on the following basis: make war together, make peace together, generous financial support and an understanding on our part that Mexico is to reconquer the lost territory in Texas, New Mexico, and Arizona. The settlement in detail is left to you. You will inform the President of the above most secretly as soon as the outbreak of war with the United States of America is certain, and add the suggestion that he should, on his own initiative, invite Japan to immediate adherence and at the same time mediate between Japan and ourselves. Please call the President’s attention to the fact that the ruthless employment of our submarines now offers the prospect of compelling England in a few months to make peace.

The Zimmerman who sent the telegram was Arthur Zimmermann, a high-ranking official in the German Foreign Affairs Office.

This was explosive, to say the least.

The British were in a dilemma.

On one hand, if the telegram were shown to the Americans, it could be enough to get the United States to join the war on the side of the Allies.

However, if it became public that the British had the telegram, it would let the Germans know that they had cracked their code, and it would be the end of their ability to intercept German communications, as Germany would change all of their codes.

However, if they showed it to the Americans, they had to get the Americans to believe that the telegram was genuine. It was really easy to fake telegrams. There were no timestamps, IP addresses, or even wax seals to validate the messages.

On February 5, the telegram had been completely decrypted and it was handed off to the British Foreign Office.

The British now had to concoct a story to explain to the Americans how they got this without letting them know that they were intercepting American diplomatic communications, and without letting the Germans know they had cracked their code.

The British knew that once the encoded German message arrived in Washington, it would be forwarded to Mexico via a commercial telegraph service. Their story was that they had bribed someone working in the Mexican office to get a copy of the telegram.

Because the Americans would have kept a copy of the encrypted message as it passed through their hands, the British could quietly slip the Americans the German code so they could decrypt it themselves to verify its authenticity.

On February 24, the details of the telegram were given to Wilson along with all of the corroborating evidence.

The telegram was made public on March 1.

There was an immediate uproar in the country and a rise in anti-German sentiment. As suspected, many people publically questioned the validity of the telegram, but that was quickly put to rest when on March 3, Arthur Zimmermann himself admitted to the telegram to an American newspaper reporter.

A little more than one month later, on April 6, the United States declared war against Germany.

While I don’t think you can say the Americans won World War I, I do think you can say that their entry into the war turned the tide. All of a sudden, a country with a population greater than both France and the UK combined had joined the conflict. The allies had a massive influx in troops, equipment, and money.

They were basically a relief pitcher who came in to save the game after the starting pitcher thew 14 innings. I’ll probably address this topic more in a later episode.

The Japanese, who the germans wanted the Mexicans to recruit, was already on the side of the allies. They had taken several German islands in the Pacific and didn’t see any need or benefit to changing sides.

The Mexican never seriously considered the German offer. In the 70 years since the Mexican-American War, the military, economic, and population gap between the US and Mexico only grew greater. There was no way they could realistically win a ground war with the United States.

Moreover, Mexico was in the middle of a civil war at the time, there was no way they could unify just to pull off an invasion of the United States. While there were benefits to German in having Mexico do this, there wasn’t much benefit to Mexico.

Moreover, even if Mexico were successful, they would have taken territory that was almost entirely desert, and filled with heavily armed, English-speaking settlers.

Instead, Mexican president Venustiano Carranza used the telegram to get the United States to recognize his regime, in exchange for formal Mexican neutrality in World War I.

The British kept up the lie about finding the telegram in Mexico for over 25 years. It wasn’t until World War II that they let the cat out of the bag and told the Americans.

As for the Germans, this has to be considered one of the biggest own-goals in history.

The benefits of unrestricted submarine warfare and sending a highly improbably hail mary proposal to Mexico didn’t come close to the negative effects of having the United States join the war as an enemy.

A bit of daily sunshine trivia in the midst of corona. The podcast is truly helpful, and I thank you much.

Thank you Squash1789, and thanks to everyone who has left a review of the show, or has supported the show over on Patereon.com.