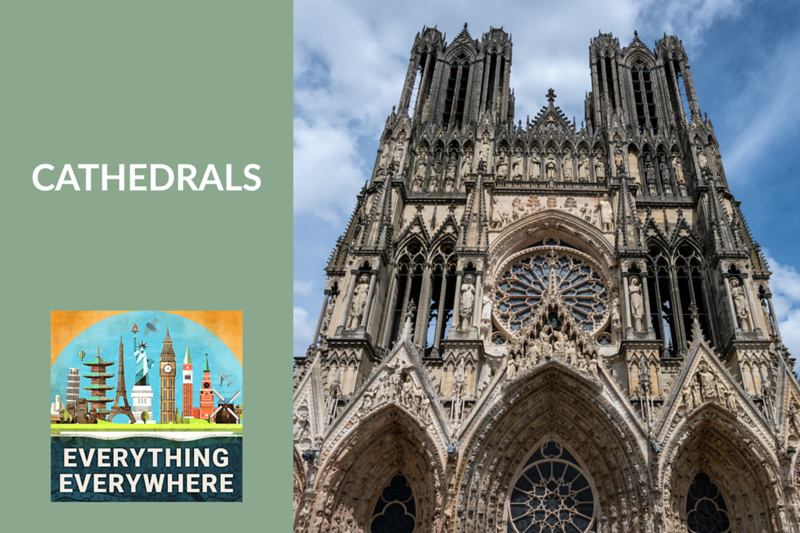 If you have ever traveled in Europe, odds are you have visited at least one major cathedral. These massive religious buildings were and still are, the architectural centerpieces in most cities.

Yet, most visitors to a cathedral will usually walk around, gawking at lofty ceilings and old art without ever really knowing what they are looking at.

…and by the way, what exactly is a cathedral?

Learn more about cathedrals on this episode of Everything Everywhere Daily.

My audiobook recommendation today is Notre-Dame: The Soul of France by Agnès Poirier.

The profound emotion felt around the world upon seeing images of Notre-Dame in flames opens up the question: Why was everyone so deeply moved?

In answer, Agnès Poirier turns to the defining moments in Notre-Dame’s history. Beginning with the laying of the cornerstone in 1163, the coronation of Napoleon, Victor Hugo’s 19th-century campaign to preserve the cathedral, the 1950s film of The Hunchback of Notre-Dame, starring Gina Lollobrigida and Anthony Quinn, and the state funeral of Charles de Gaulle, before returning to the present.

To start any conversation about cathedrals we first have to define what a cathedral is.

A cathedral has nothing to do with any architectural style, size, or level of ostentatiousness.

A cathedral is nothing more than the home church for a bishop in a diocese. In theory, a cathedral could be a mobile home if it were the church of a bishop.

The name cathedral comes from the Latin word ‘cathedra’ which means ‘chair’. The chair in the church was a symbol of the leadership and authority of a bishop, so the cathedral was the building with the chair.

Today, the chair is more figurative than literal. Every church has chairs, and a bishop can have a chair in the same way that someone could chair a meeting, even if they are standing up.

Because of the definition of a cathedral being the principal building of a bishop, many churches that people often assume are cathedrals are in fact not technically cathedrals.

Most famously, St. Peter’s Basilica in Rome is not a cathedral. The pope is the bishop of Rome and the main church for the Bishop of Rome is actually Saint John’s Lateran, which actually does have a very prominently displayed chair.

What is a basilica? Technically there are two types of basilicas: basilicas major and basilicas minor.

There are only four major basilicas in the world and they are all in Rome: St. Peter’s, St. John’s Lateran, St. Mary’s Major, and St. Paul’s Outside the Walls.

Every other basilica is a basilica minor. These are just churches that are notable for religious, historic, or architectural reasons. A cathedral can also be a basilica.

In most western European languages, a cathedral is known as a doumo or dom.

This comes from the Latin word for house ‘domus’. With the construction of the huge dome on the cathedral of Florence, this became the origin of the English word ‘dome’.

The first cathedrals didn’t appear until the reign of the Roman Emperor Constantine, who legalized Christianity. Prior to this time, Christianity was mostly an underground religion.

What few buildings were dedicated to worship were usually residential homes ‘domus ecclesiae’ and the bishop might have had a ‘domus episcopalis’.

From here on out, I’m going to skip the technical definition of a cathedral and really just focus on the big, elaborate churches, which is the colloquial use of the word. In the vast majority of cases, however, they are one and the same anyhow.

It was torn down to make way for the current St. Peter’s during the Renaissance.

I gave the modern definition of a basilica before, but the ancient definition was a particular style of building. An architectural basilica was based on an ancient Roman design. It was a long rectangle, with three sections, with two rows of columns on the inside. The middle section was wider and higher than the two sections on the sides.

There are several old churches that still have this architectural style. St. Paul’s Outside the Walls in Rome, the Church of the Nativity in Bethlehem, and the basilicas of Sant’Apollinare Nuovo and San Vitale in Ravenna, Italy.

If you ever get a chance, visit the Church of the Nativity in Bethlehem, which is one of the oldest Christian churches in the world.

Over the centuries, the explicit Roman basilica design evolved into something Romanesque. This style of building was built from around the 8th century to the 13th century.

These buildings deviate from the classical Roman layout. They are usually much bigger and have towers. They also have very thick walls, small windows, semicircular arches in windows and doorways, and often barreled semicircular ceilings.

Examples of this type of cathedral are in Aachen, Germany, Santiago de Compostella, Spain, and the Church of the Holy Sepulchre in Jerusalem.

It is hard to explain architectural styles on a podcast, but once you’ve been to a few Romanesque buildings, they are easy to identify.

As Christianity spread and the church grew in power, the purpose of cathedrals changed. They weren’t simply buildings for worship any more.

These were places where kings and queens would be crowned and where feast days were celebrated.

Moreover, these were places of pilgrimages.  People from all over would gravitate to cathedrals to pray at the tombs of saints and to venerate various relics that the cathedral might have held. If you had major relics like the tomb of an apostle, as Santiago de Compostella claimed, you could bring in tens of thousands of people.

Other relics included the bones of the Three Wise Men in Cologne, the burial should of Jesus in Turin, and the holy grail in Valencia.

Cathedrals were built in major cities, and the cities grew around the cathedrals. Markets and merchants developed in the cities, which brought in funds to build ever-larger cathedrals.

As the fortunes of cities would rise and fall, cathedrals would often take centuries to complete as funding could potentially dry up for years or decades before construction could start again.

As there were incentives for larger cathedrals, building techniques were developed to make them larger.

The big change going into the 12th and 13th centuries was the development of gothic architecture.

Gothic cathedrals were a marked change over the romanesque churches of the previous centuries. They were built higher, with larger windows, bringing in more light. These windows were usually giant stained glass windows which turned the inside of the church into a cacophony of color.

The big techniques which allowed these building to be constructed were the pointed arch, vaulted ceilings, and the flying buttress.

These arches allowed for ribbed and vaulted ceilings which increased the height of the buildings.

The flying buttresses were ribs placed outside the building to support the walls and prevent them from collapsing outward.

These gothic cathedrals were built in such cities as Amiens, Chartres, Cologne, Canterbury, Trier, Bourges, and of course the quintessential gothic cathedral, Note Dame in Paris.

Most of these gothic cathedrals were built in the shape of a cross with a main nave and transept to cross the T.

The first such major dome was the cathedral in Florence, Italy. The cathedral was begun as a gothic-style building and then finished with an early renaissance dome.

The greatest and largest renaissance dome by far is the dome on St. Peter’s Basilica in Rome.

This discussion of cathedrals is a large enough topic to take up a lifetime of study. Far more than can be covered in a daily podcast.

The big question is, how should you go about visiting a cathedral? How do you avoid just walking around gawking without any awareness as to what is around you?

To begin, almost every cathedral will have some sort of gift shop. Buy or grab a brochure or book at the entrance. Better yet, if you can, see if you can hire a local guide who knows the building inside and out.

What should you look for when you are there?

First, pay attention to the architecture. I just gave you a brief overview of the main architectural styles. There is a lot more to the subject you can learn even with basic searches online.

Many cathedrals have a mixture of styles because they were built over time, or they have different innovations which were used in their building. Every cathedral is different and you should look to see what makes the one you are in unique.

The building might have been damaged or reconstructed due to fires, earthquakes, or wars.

Second, try to learn about the history of the building. A cathedral is a reflection of the city where it was built.  How it was built and the people who built it are a different story for each cathedral. There might also be a saint which is associated with the cathedral or some relics which are claimed by the building.

Events such as coronations may have taken place in the building, depending on where it is.

Finally, look at the art. There will be various paintings, sculptures, altarpieces, and carvings all over the cathedral. These may have been created by notable artists or artists you’ve never heard of.

Cathedrals are incredible structures and they are history books in stone. They tell the religious, historical, architectural, and even technical stories of the cities they are located.