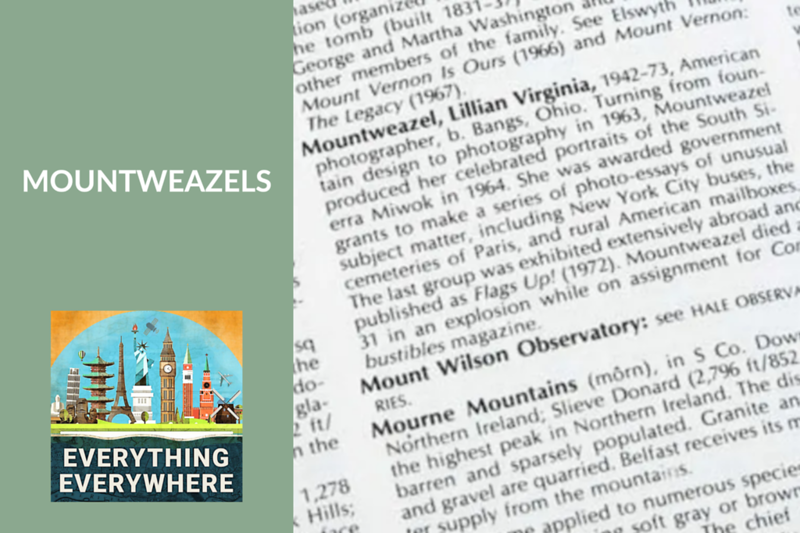 Copyright is what protects creators from having someone copy and make money off of their work without compensation.

However, there are some things like directories or maps which have information that can be difficult to copyright. It’s just presenting information or data which exists out in the real world.

Such creators of maps and directories have found unique ways around this problem.

Learn more about copyright traps, aka Mountweazels, on this episode of Everything Everywhere Daily.

My audiobook recommendation today is The Copyright Wars: Three Centuries of Trans-Atlantic Battle by Peter Baldwin

Today’s copyright wars can seem unprecedented. Sparked by the digital revolution that has made copyright – and its violation – a part of everyday life, fights over intellectual property have pitted creators against consumers, and open-access advocates. But while the digital generation can be forgiven for thinking the dispute between creators and consumers is new, the copyright wars in fact stretch back three centuries – and their history is essential to understanding today’s battles.

Let’s suppose that I wanted to start a company that sold maps.

I could hire cartographers and spend a lot of time and money going out and gathering data.

Because I’m just documenting something which exists in reality the end result of all my hard work and investment is going to look just like other maps that are out there already.

So, why couldn’t I just skip all the effort and just copy the maps which already exist? Sure, I’ll change the fonts and the colors, but fundamentally, the end result is going to be the same either way, right?

This is a big problem for any maker of reference products: maps, dictionaries, and encyclopedias. You can’t copyright facts, but you can take steps to show that someone is a plagiarist or is violating copyright.

They do this via copyright traps.

Copyright traps are nothing more than false information which is put in reference material to catch people who copy their material. If you copy everything without checking, you’ll copy the false information, which will be evidence of plagiarism.

Perhaps the most famous example was in the 1975 New Columbia Encyclopedia. They created an entry for one Lillian Virginia Mountweazel.

They created a full entry in the encyclopedia for her, which was totally fiction.

While there were no cases of anyone copying the Mountweazel entry, the term Mountweazel is now a term for a copyright trap.

There is a Lilian Mountweazel Facebook page and the Lilian Virginia Mountweazel Research Center website which has fake interviews with people who knew her, as well as fake copies of Combustibles Magazine.

While one of the best-known examples, it is hardly the only one. The 1943 edition of Webster’s Twentieth Century Dictionary had an entry for jungftak.

There was no pronunciation given, so I’m pretty sure I said it correctly.

The New Oxford American Dictionary has a definition for the word “esquivalence”.

The definition of the word is “the willful avoidance of one’s official responsibilities.”

The thing is, this fake word has actually found some usage and there is an entry for it in Wiktionary, which references the original New Oxford American Dictionary definition.

Personally, I think esquivalence is a perfectly cromulent word.

Trap Streets are fictional streets or locations which are used to check if someone is copying their map. They are usually very small streets or alleys of no importance. As no one actually uses it as an address, because it doesn’t exist, then it isn’t too much of a problem if they appear on maps.

The State of Michigan put fake towns in Ohio in their 1978 official highway roadmap. The tows were Beatosu (spelled beat-O-S-U) and Goblu (aka Go Blu, the colors of the University of Michigan).

The publishers of the London A-Z Street Atlas confessed that there are over 100 trap streets in the pages of the atlas.

The best example of a fake location on a map is the town of Agloe, New York.

In the 1930s, the General Drafting company was working on a roadmap for New York State. Two cartographers, Otto Lindberg and Ernest Alpers created a copyright trap just north of the town of Roscoe, New York in the Catskill Mountains.

They invented the town of Agloe, based on an anagram of their names, and put it an intersection of two dirt roads.

In the 1950s, someone built a general store at the location, and seeing the name Agloe on the map, named it the Agloe General Store.

Then, Rand McNally created a map with Agloe on it. Rand McNally was threatened with a lawsuit, but they claimed that they got their information from the county and that the fictitious place had now become real, so they couldn’t be sued.

The issue of fake places on a map was actually the subject of a lawsuit in 1992.

In the case of Nester’s Map & Guide Corp. v. Hagstrom Map Co., the court ruled: “[t]o treat ‘false’ facts interspersed among actual facts and represented as actual facts as fiction would mean that no one could ever reproduce or copy actual facts without risk of reproducing a false fact and thereby violating a copyright … If such were the law, information could never be reproduced or widely disseminated.”

So basically, putting in fake data can help you embarrass those who copy you, but it doesn’t mean it can be protected by copyright law.

Dictionaries, maps, and encyclopedias aren’t the only sources that use fake data.

In the 1903 book The Musical Guide, they had a section which listed musical instruments. One of the instruments was Zzxjoanw spelled z-z-x-j-o-a-n-w, which they claimed was a Maori word for a fife or a flute.

The word is still occasionally appearing in books today.

American painter Gilbert Stuart did a famous portrait of George Washington. After he created the painting, he was commissioned to make duplicates of it. In all of the duplicates, in the books in the background, he misspelled the word “States” by dropping one of the “t’s” so you could tell the copies from the original.

Sometimes it has nothing to do with copy thieves. Sometimes it’s just to be funny.

Jakob Maria Mierscheid has been a member of the German Bundestag since 1979. He sits on the Committee for Small and Medium-Sized Businesses.

According to the official Bundestag directory, he was born in Morbach/Hunsrück, a very rural constituency in Rhineland-Palatinate. He is Catholic and a member of the Social Democratic Party of Germany.

And his is totally fake.

There are literally 615 names in the Bundestag directory even though there are only 614 members.

Maybe I’m just a hopeless romantic, but one day I would like to see Jakob Maria Meirshchied go on a date with Lillian Virginia Mountweazel, to visit the beautiful town of Agloe, New York.