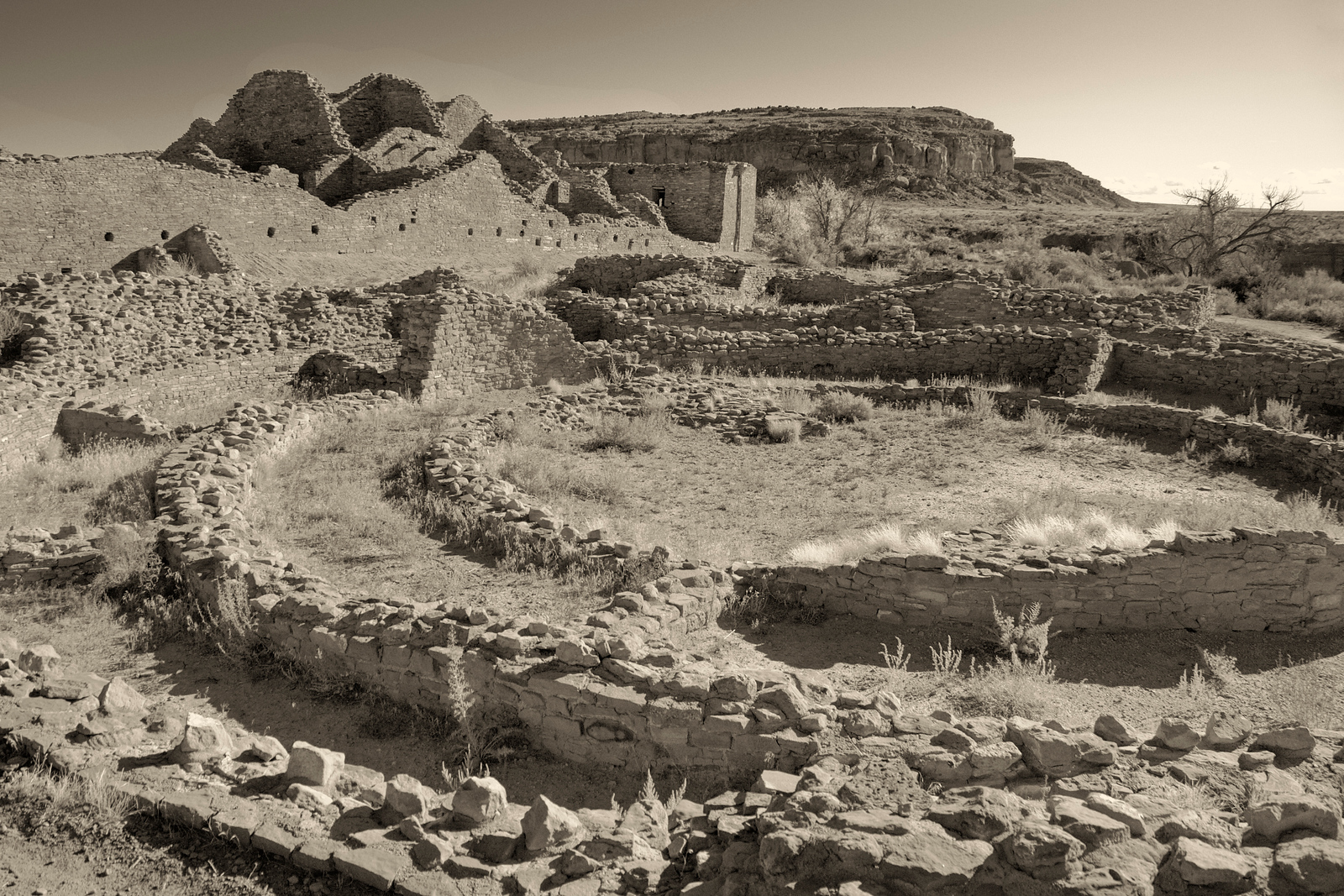 From the World Heritage inscription for Chaco Culture:

For over 2,000 years, Pueblo peoples occupied a vast region of the south-western United States. Chaco Canyon, a major center of ancestral Pueblo culture between 850 and 1250, was a focus for ceremonials, trade and political activity for the prehistoric Four Corners area. Chaco is remarkable for its monumental public and ceremonial buildings and its distinctive architecture – it has an ancient urban ceremonial center that is unlike anything constructed before or since. In addition to the Chaco Culture National Historical Park, the World Heritage property includes the Aztec Ruins National Monument and several smaller Chaco sites managed by the Bureau of Land Management.

Along with Mesa Verde, Chaco Culture is one of the best examples of ancient culture in the United States. Getting to Chaco Culture National Historic Monument is a bit of a challenge. It is a very remote site that required at least 20 miles of travel over unpaved roads. If it has been recently raining, forget about visiting.

The Chaco Culture National Historic Park is a unit of the US National Park Service in New Mexico. With a size of nearly 34,000 acres in land area, this park was recognized into the list of UNESCO World Heritage Sites in 1987. An average of about 40,000 tourists visit the park each year.

Chaco Culture offers the most exceptional and densest concentration of pueblos in the American Southwest region. It is located in a remote canyon that was cut by the Chaco Wash. It is home to the most impressive collection of ancient ruins, specifically from the Chaco culture, in this part of the continent.

There are several methods to get to the Chaco Culture Monument. If you are bringing your own car, please do note that some of the roads that are recommended by GPS services are unsafe to travel on. But to get to Chaco Culture, you must travel on dirt roads. You can travel via Highway 57 or via Pueblo Pintado. Be extra careful during your drive as the roads leading to the park are infrequently maintained and are therefore in poor condition.

If you are traveling from outside of the state or country, you must book a flight to any of the airports in Albuquerque, Farmington or Durango, Colorado. Since there is no public transportation to and within the park, bringing your own vehicle is recommended.

From AD 900 to 1150, Chaco Canyon served as the center of the Ancient Pueblo People’s culture. The local Chacoans hauled timber and sandstone blocks to build their dwellings and other structures at that time. Throughout the history of settlement in the region, they were able to produce 15 major complexes (some of which are still preserved until today).

The buildings, aside from the impressive ancient construction methods and their longevity, also provided a glimpse into the history and culture of the Chaco Culture. These buildings were formed to in line with the solar and lunar cycles. Hence, it took the Ancient Puebloans several centuries to be able to make accurate astronomic observations that went into the construction of these buildings.

The Chaco Culture monument and its ruins are located in some of the aridest and sparsely populated areas of the Four Corners region in the US. Hence, the Chaco Culture sites are considered fragile. Since they are considered sacred to the Hopi and Pueblo people, the site was established as a national park in order to reinforce the efforts at preserving what is left of this culture and ancient Pueblo community that once inhabited this part of the US. To this day, efforts are being done in order to preserve the oral accounts of their history and culture, along with their spiritual relationship with the land.

The most important and largest Chacoan complexes are located within the central canyon region of the park. The Pueblo Bonito is the most studied out of these complexes. This structure alone covers nearly 2 acres in land area. Some parts of this structure are four stories high. Other notable structures that belong to the said complex include Pueblo del Arroyo, Casa Rinconada, Kin Kietso, and Pueblo Alto. More clusters of great houses are located at the outliers portion of the park.