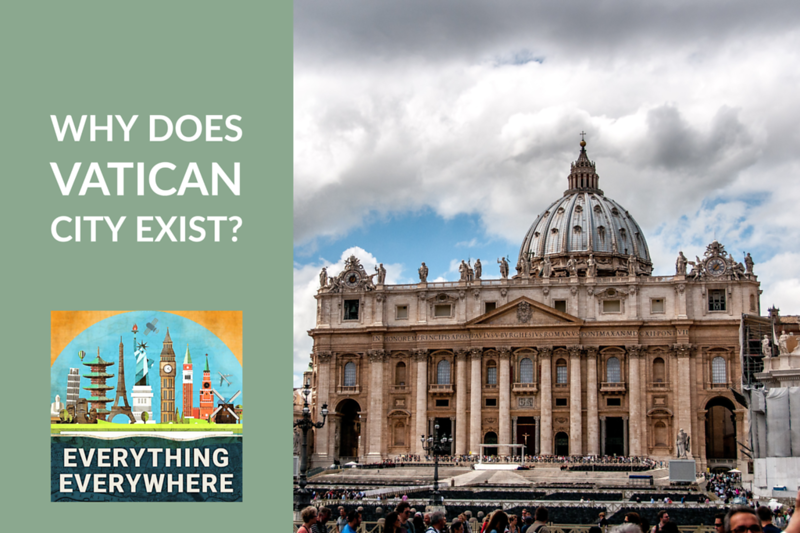 Located in the middle of Rome, the capital of Italy, is what many people consider to be the smallest country in the world: Vatican City.

It is different in almost every respect to any other country, so much so, that it is reasonable to ask why the country even exists.

Learn more about Vatican City, and why it is even a thing, on this episode of Everything Everywhere Daily.

To say that Vatican City is unlike any other country in the world is really a massive understatement.

It is an absolute monarchy, but the monarch is elected.

In several episodes I’ve touched upon the papacy and many of those stories will have some origin in the Roman Empire.

However, the story of Vatican City really starts in the 19th century.

Prior to Vatican City, there was a thing called the Papal States. Among all the kingdoms and republics in Italy, there was a swath of land in the middle of Italy which was ruled by the Pope.

In addition to providing income for the Papacy, it also provided independence for the pope from the rest of the rulers in Europe. So long as the pope had his plot of land, he didn’t have to worry about kings trying to influence him.

This situation changed in the 19th century when Italy began to unify. All of the smaller entities got merged into the new greater Italy.

In 1870, Rome itself was taken over, and the pope lost the last of his territorial sovereignty. In May 1871 Italy passed the Law of Guarantees, which tried to make the pope a citizen of Italy, but also allowed him to have ambassadors and other honors. The catch was, the pope would not be an independent sovereign.

This became known in diplomatic circles as the Roman Question.

During this period, countries kept sending ambassadors and emmisaries to the Holy See.

Here is where I have to explain the biggest difference between the Vatican and every other country: The Holy See.

The Holy See is the institution of the Papacy and the Catholic Church. A see, spelled s-e-e, is a name for a diocese, or the area which has oversight by a bishop. The Holy See is just the name for the diocese of Rome.

The best analogy I could think of would be the International Red Cross. The Red Cross has relations with countries. Let’s say the United States assigned an ambassador to the Red Cross, which is not totally out of the question. It would be someone who could coordinate efforts with the Red Cross and the American government.

Now, because the Red Cross doesn’t want to be influenced by any government, let’s say that Switzerland gives land that the Red Cross headquarters sits on independence. Let’s call this country Redcrosslandia.

The few acres of land that the Red Cross headquarters might sit on doesn’t really matter in the big scheme of things. What matters is the mission and operations of the Red Cross.  So, the rest of the world would still work with the Red Cross, not Redcrosslandia, which is really just responsible for mowing the lawn and doing maintenance on buildings.

So, back to Rome.

The Rome Question hung over Italy for decades. Italy refused to move the capital out of Rome, and the Popes refused to recognize the new nation of Italy, recognize civil marriages, or even encourage people to vote.

There was even consideration by Pope Pius IX of leaving Rome entirely and going somewhere else, like Malta.

It became obvious over time that the Papal States weren’t going to be making a comeback. Moreover, the people of Rome really didn’t want to be ruled by the Pope. They wanted a mayor and a city council and all the normal things cities have.

The main issue for the popes simply became sovereignty. They didn’t want to be under the control of Italy.

This was eventually resolved with the Lateran Treat of 1929.

The Lateran Treaty created the sovereign state of Vatican City, which would be under the control of the Holy See. There would also be other buildings over which the Holy See would have extraterritorial jurisdiction. Here I’ll refer you to my episode on extraterritoriality

In addition to creating Vatican City, the Holy See recognized Italy and agreed to stay neutral in international affairs.

To celebrate the treaty, Italian Prime Minister Benito Mussolini created the  Via della Conciliazione, which is the wide boulevard directly in front of St. Peter’s Square.

Officially then, Vatican City has an area of 121 acres.

The citizens of Vatican City number 825 as of 2019. That includes 453 residents and 372 diplomats residing outside of the Vatican. A total of about 800 people live in Vatican City, although not all are citizens.

Vatican Citizenship is given to those who work for the Vatican. Members of the Swiss Guard are given citizenship as are their families.

Vatican City has no official language, however, the working language is Italian, and official documents are in Latin. The Swiss Guard, being Swiss, uses Swiss German as their working language.

Because of its small size, whenever it is on lists of countries, it is usually a statistical outlier and it is usually not listed.

Believe it or not, Vatican City actually has a football league. They have eight teams in their league and they play for the Vatican City Championship.

The Vatican has a parish church, and no it isn’t St. Peter’s Basilica. It is called St. Anne’s and it is literally around the corner of one of the gates. If you are walking around the Vatican and see a gate with a parking lot on the other side, that is probably the gate where it is located.

The Vatican does have a railway. There is a railway station and about 300 meters of track inside the Vatican. It is mostly used for bringing freight and other goods into the country.

The Vatican has its only postal system and it is actually one of the biggest moneymakers in the country. It is a full member of the Universal Postal Union, which is one of the few international organizations they have full membership in. Their membership is as Vatican City, not the Holy See.

They are represented in a few other international organizations as Vatican City, in particular organizations dealing with communications, and Interpol.

Other governments have diplomatic relations with the Holy See, not Vatican City. Because of its size, no embassies are located within the Vatican. Everything is in Rome, and most large countries have separate embassies for Italy and the Vatican, in separate buildings.

During World War II the British ambassador to the Holy See was allowed to stay within the Vatican due to Britain being at war with Italy.

Every building in the country is listed as a cultural property under the Hague Convention for the Protection of Cultural Property in the Event of Armed Conflict. This means according to international law, none of the 133 countries which signed the treaty, can invade the Vatican.

The actual day-to-day administration of Vatican City is in the hands of a legislature, believe it or not. It is called the Pontifical Commission for Vatican City State and it consists of seven cardinals. They may pass laws, but everything must be approved by the pope.

It is headed by the President of the Governorate of Vatican City State, which is a cardinal who has the daily administrative responsibility for the country. This is the executive branch of government. As with the legislature, this cardinal is assigned by the pope. They oversee the various departments and offices in Vatican City, which are not part of the Holy See.

There is a judicial branch of government as well. It actually has several different levels including judges, a tribunal, an appellate court, and a supreme court.

The law in Vatican City is first and foremost is the Catholic Church’s Canon Law, but that wasn’t really designed to be a legal system for a territory. In 2001, the Fundamental Law of Vatican City State was enacted which serves as the constitutional basis for the civil functioning of the Vatican. This includes laws from treaties that the Holy See has signed including money laundering and human trafficking.

So, despite the long history of the place called the Vatican, the Vatican City State is actually less than 100 years old. It was a legal creation for the Holy See to function independently.

While it is very different than most countries, it does have a few of the features which most independent countries exhibit.