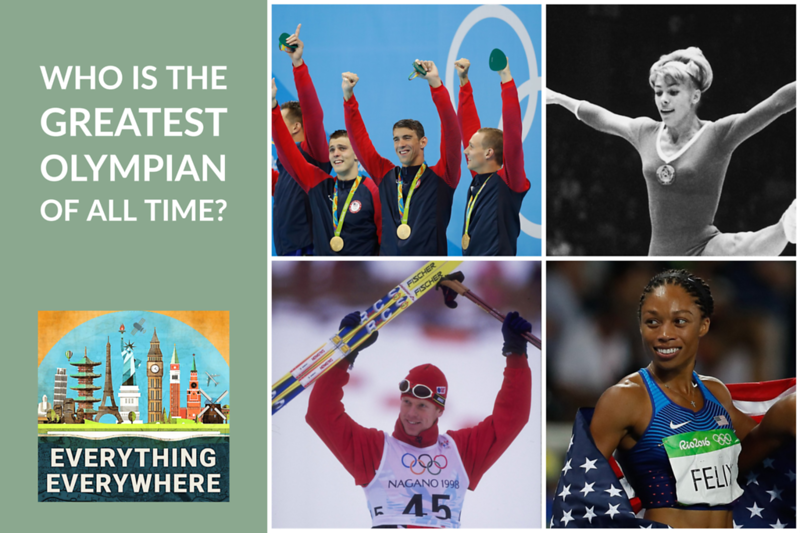 The modern Olympics have been celebrated for over 100 years. Since their beginning in 1896, there have been over 100,000 athletes who have competed at the Olympics and thousands of medals have been awarded.

At every Olympics, just like clockwork, the same debate is initiated: who is the greatest Olympian of all time?

Join me as I try to answer this unanswerable question, on this episode of Everything Everywhere Daily.

Brilliant’s mission is to inspire and develop people to achieve their goals in science, technology, engineering, and mathematics — one person, one question, and one small commitment to learning at a time.

Let’s start by addressing the elephant in the room. Trying to determine who is the greatest Olympian of all time, is an almost impossible question.

For starters, not all sports are equal. Not even close. If you are the best basketball player in the world, you can only win one medal per Olympics, and even then you have to share it with 12 other people on your team.

If you are good at swimming, you can win medals at various distances, using different strokes, and in relays. You can slice and dice the different swimming events and get medals for each one.

Moreover, if we go back in time, the Olympics wasn’t really the thing it was today. Athletes were literally amateurs, and often had to have jobs, or had to retire early because there was no money in sports. Mark Spitz set an Olympic record for medals in 1972 and then couldn’t afford to swim anymore and had to get a job.

So with that being said, let’s dive into it. I’ll address the greatest male and female Olympians separately.

Let’s start with the men, and let’s look at the metric which is the easiest to analyze: total medals won.

There is really no question if you use this metric because the person who is number one is so far ahead of anyone else, it isn’t even close.  Swimmer Michael Phelps.

Phelps won 23 Olympic gold medals and 28 medals overall, at four different Olympic games.  That is 10 more total medals than the closest woman, who I’ll talk about in a bit, and 13 more than the next closest man, Nikolai Andrianov, a Soviet gymnast, who won 15.

Only 142 people in Olympic history have ever won 7 medals combined, which would put you amongst the Olympic elite. Phelps won four times that number.

Even if you take out the relay races, he still won more individual medals than anyone in history.

He more than doubled the number of medals that anyone, male or female ever won in swimming, so even within his own sport, his accomplishments stand out.

I was sort of hoping he would compete in Tokyo, just because I really like records, but that’s easy for me to say when I’m not the one who has to spend hours everyday training.

How about track and field? The record for most medals is held by Paavo Nurmi of Finland who won 9 gold medals and 12 medals overall over 3 different Olympics in the 1920s. However, 5 of those medals were in events that no longer exist at the Olympics.

Behind him is American Carl Lewis. Lewis won 9 gold medals and 1 silver medal across four different events: the 100m, 200m, 4×100 relay, and the long jump. He was both one of the greatest sprinters and jumpers in history, and he won the long jump at four different Olympic games.

However, with that silver medal, he wasn’t quite perfect.

Jamaican Usain Bolt was awarded 9 gold medals in 9 events over three Olympics, however, one of his relay gold medals was taken away, because he had a teammate who tested positive for performance-enhancing drugs.

What about just beating your competition? Who crushed their opponents by the largest margin? That would probably be American long jumper Bob Beamon who had one of the greatest single performances in Olympic History when he demolished the world record in 1968. His Olympic record still stands and it is the oldest Olympic record from any sport still standing.

How about longevity? Winning a ton of medals in one Olympics is great, but if you can only win one per Olympics, then success might be thought of as winning over multiple Olympics.

However, another athlete who should receive special mention in terms of longevity is Italian fencer Edoardo Mangiarotti. He won gold medals at four different Olympics, and three more medals at a fifth.

However, those Olympic gold medals span from 1936 to 1960, which were 24 years apart. Two Olympics were canceled during World War II, and if those had taken place, he would probably have won medals at seven Olympics.

I should finally mention that just being in the Olympics is pretty impressive. So who has appeared in the most Olympic games?

That would be Canadian equestrian athlete Ian Millar who appeared in 10 different Olympics. His first Olympics was in 1972 in Munich and his last was in 2012 in London. Canada boycotted the 1980 Olympics in Moscow, and he was qualified for the 2016 Olympics in Rio de Janeiro, but his horse was injured. So, had politics and animal welfare not gotten in the way, he could have competed in 12 different Olympics.

So how about the women?

The top female medal winner, the top olympian period before Michael Phelps, is Soviet gymnast Larisa Latynina. She won 9 gold medals and 18 medals overall over three Olympics in the 1950s and 1960s. She was the first woman to win a medal in every gymnastics event at the Olympics.

At the Winter Olympics, Norwegian cross country skier Marit Bjørgen won 8 gold medals and 15 medals overall. She is the most decorated winter Olympian in history. She might be competing in Beijing in 2022 at the age of 42 to pad her medal count. She won 5 medals in 2018, so it is definitely not out of the question for her to tie or surpass Larisa Latynina’s record.

American sprinter Allyson Felix won 9 medals, which is the most by any woman in track and field. She won 6 gold and 3 silver, just short of the track record set by Carl Lewis. Most of her medals came in relay races, but she also won a gold in the 200m. She is competing in Tokyo and if she can win 1 medal, she will set the record for the most medals in women’s Olympic track and field history, breaking her tie with Jamaican sprinter Merlene Ottey.

The closest Bob Beamon feat I could find for women, at least in terms of margin of victory, might be the 800m freestyle swimming event in Rio. American swimmer Katie Ledecky won the event by an incredible 11 seconds. The next closest competitors weren’t even on the television camera when she ended the race.

Assuming she competes in Paris in 2024, which she says she will, she is likely to become the woman with the most Olympic swimming medals. She is currently 2 behind American Jenny Thompson, who has 12.

As far as longevity, at the time I’m recording this there hasn’t been a woman who has won a gold medal at five different Olympic games, but that might change very soon.

American’s Sue Bird and Diana Taurasi have both won four gold medals in basketball at four different Olympics. Both are on the American Olympic team in Tokyo, which is heavily favored to win. What is interesting, is that Diana Taurasi is only 39, and the 2024 Olympics are only 3 years out instead of 4 due to the pandemic. She could possibly be on the team again.

The woman who has competed in the most Olympics is the shooter from the Republic of Georgia Nino Salukvadze. She has been at 9 Olympics, with her 9th being Tokyo. She has indicated she will probably try to compete in Paris in 2024 to tie the record for the most Olympic appearances.

All of the people I’ve just mentioned showed extreme excellence in their chosen sports. But maybe the greatest Olympian is someone who has excelled in more than one sport?

British Olympian Rebecca Romero won a silver medal in 2004 in rowing and a gold medal in 2008 in cycling.

The most impressive might be the athletes who won medals at both the Summer and Winter Olympics.

American Lauren Williams won the gold medal at the 2012 Olympics in the 4×100 meter relay and then won a silver medal in 2014 in the two-woman bobsled.

Canadian Clara Huges won 2 cycling bronze medals in 1996 and then proceeded to win 5 more medals in speed skating in 2002, 2006, and 2010. She is the only person to win multiple medals at both the summer and winter games.

Finally, I’ll end with Christa Luding-Rothenburger from East Germany. She won a silver medal in cycling in 1988 in Seoul. She also won four medals in speed skating in 1984, 1988, and 1992, including 2 gold medals.

Her 1988 medals made her the only person ever to win summer and Olympic medals in the same year.

Who you think is the greatest Olympian is ultimately a matter of opinion. Regardless of who you think it is, it is likely it was someone mentioned in this episode.

With every Olympic games, there will be new athletes setting new records, adding new names to the debate about the greatest Olympian of all time.