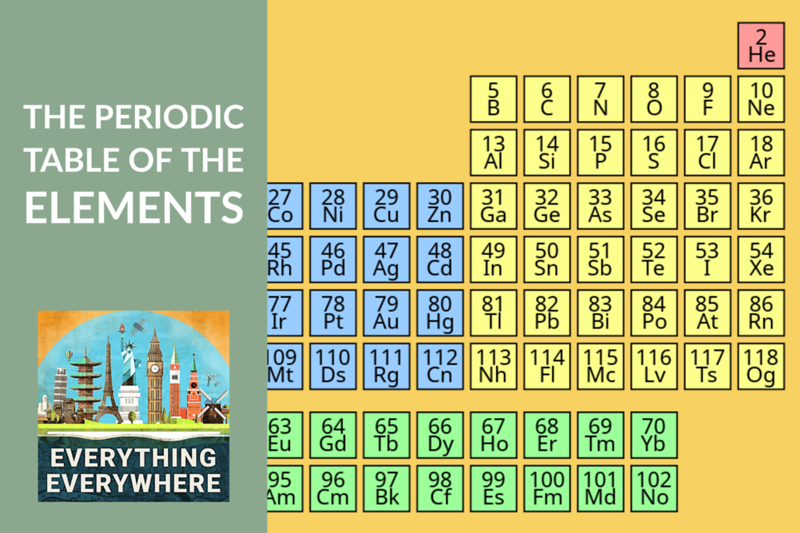 You’ve seen it in your science classroom, and there was probably a copy of it on the inside cover of your chemistry book. Maybe if you are a real nerd, you might even have your own personal copy.

Yet its very creation was a revolutionary breakthrough that helped scientists and generations of students understand the very things which make up our world.

Learn more about the Periodic Table of the Elements and how it helped explain the natural world, on this episode of Everything Everywhere Daily.

My audiobook recommendation today is Periodic Tales: A Cultural History of the Elements, From Arsenic to Zinc by Hugh Aldersey-Williams.

Like the alphabet, the calendar, or the zodiac, the periodic table of the chemical elements has a permanent place in our imagination. But aside from the handful of common ones (iron, carbon, copper, gold), the elements themselves remain wrapped in mystery. We do not know what most of them look like, how they exist in nature, how they got their names, or of what use they are to us. Unlocking their astonishing secrets and colorful pasts, Periodic Tales is a passionate journey through mines and artists’ studios, to factories and cathedrals, into the woods, and to the sea to discover the true stories of these fascinating but mysterious building blocks of the universe.

They had no clue what an element was or an atom, but they knew it was a thing, and they knew that one thing like copper was different than another thing like iron.

By the time the end of the 18th century rolled around, American was a newly independent country, and they were a little over two dozen known elements at that time.

In 1789, a French chemist by the name of Antoine Lavoisier made the first systematic attempt at trying to list all of the known elements. He came up with a list of 33 elements and grouped them by known attributes. He primarily divided them into metals and non-metals.

Unfortunately, many of his elements weren’t really elements. He included things like light, heat which weren’t even physical things.

However, he did get one thing pretty much right. He defined an element as something which could not be broken down any further.

Today we call them atoms.

In 1829, German chemist Johann Wolfgang Döbereiner got a little closer. He noticed that many of the elements that displayed similar properties could be grouped into threes and that the atomic weights of the elements were all next to each other.

Over the next few decades, as more elements were discovered, chemists noticed that there were patterns with how elements bonded to each other. For example, carbon could bond to four hydrogen atoms, or it could bond to two oxygen atoms.

However, all of the attempts to try to organize all of the known elements didn’t work. It seemed to make sense in bits and pieces, but when you tried to put it all together, nothing seemed to work.

In 1860, a conference was held in Germany on the subject of atomic weights. They determined that hydrogen had an atomic weight of 1, and that every other element would be measured in comparison to it.

In 1862, a French geologist named Alexandre-Émile Béguyer de Chancourtois came really close when he noticed that there was a periodicity of the elements. This was a huge step forward in understanding how everything fit together, but it wasn’t quite there yet.

He proposed organizing them in the form of a helix or a screw.

The 1860s saw several other attempts at organizing the elements, and each attempt brought something new to the table which helped describe the elements in relation to each other.

There was one problem that no one had figured out.

The big breakthrough in the organization of the elements came from a Russian chemist named Dmitri Mendeleev.

In 1869 he published his table in which he used rows and columns to organize the elements by atomic weight.  He would start a new row when attributes started to repeat.

The breakthrough element of his chart, and the thing that no one else had done up until this point, was that he left empty spaces where there were undiscovered elements.

Everyone else just put all of the known elements together, and that was why everything didn’t fit. Mendeleev just let the atomic weights speak for themselves and if there wasn’t a known element that fit, it just assumed that it would be discovered later.

By leaving the spaces empty, he also guessed at what the general property of the element in that spot would be.

He also was willing to occasionally ignore the order of atomic weights when it made sense and occasionally switch elements around.

His first table in 1869 wasn’t perfect. He produced another table in 1871 which had more spaces for undiscovered elements.

There was also one big unresolved problem. There was a huge gap in atomic weights between the elements cerium and tantalum that he couldn’t resolve.

At first, no one really gave his table much attention.

Then, a huge discovery in 1911 really set the periodic table on firm ground. New Zealand physicist Ernest Rutherford discovered the nucleus of the atom.

After that, it was suggested that the chart follow the atomic number of the atom which is the number of the protons in the nucleus. It turns out, the table was almost already a perfect fit.

Based on this new understanding of the periodic table, English Physicist Henry Moseley predicted in 1913 that there were still three elements to be discovered between aluminum and gold.

His prediction was 100% correct.

The last natural element discovered was Francium in 1939.

That big gap between cerium and tantalum was finally resolved by Glen Seaborg who identified the rare earth elements which are usually separated from the rest of the chart at the bottom. They are also known as the lanthanides and the actinides.

One of the interesting implications of the periodic table is that the last natural element is uranium with an atomic number of 92. However, there are a bunch of empty spaces beyond number 92.

Unlike the missing elements lower on the chart, these can’t be found in nature, so scientists have been working over the decades to make them, themselves.

The elements closest to uranium can be created via nuclear reactions. However, the farther out you get, the only way to make them is via smashing other large atoms together.

As of 2009, researchers have created all of the elements to fill up the table. The last artificial element to be created was element 117, which is called Tennessine.  The last element on the periodic table is element 118, called Oganesson, and it falls in the same column as the noble gases.

All of these artificial elements have extremely short half-lives and often don’t exists more than a tiny fraction of a second.

It isn’t known if there are stable elements further out, or if there might be stable versions of the atoms they’ve created.

So, how do you read the periodic table?

Starting in the upper left with hydrogen, it goes horizontal by atomic number. Hydrogen is 1, Helium is 2, Lithium is 3, etc. As I mentioned before, the atomic number is the number of protons in the nucleus, and that is what determines what an element is.

The rare earth elements at the bottom are usually displayed as separate, but they do fit on the table. However, if you printed a table with them in their proper place, it would be really really wide, so it usually isn’t presented that way.

Each column is known as a group. The group reflects the number of electrons in the upper electron shell. The first column is known as the alkali metals. All of these elements have 1 electron available and everything in this group is very reactive. This includes lithium, sodium, and potassium.

If you haven’t seen it, go look to see what happens when these elements in their pure metallic form at placed in water. There are many videos online. They are all explosive, and they get more explosive the further down the group you go.

In the last group are the Nobel or inert gases. They rarely react with anything because their electron shells are full. They include helium, neon, argon, xenon, and radon.

Metals tend to be on the left side and in the middle.

The periodic table really is an amazing thing. It so neatly and cleanly encapsulates how all of the elements which make up the world relate to each other.

It isn’t just a handy educational aide, but it also should be considered a thing of beauty.