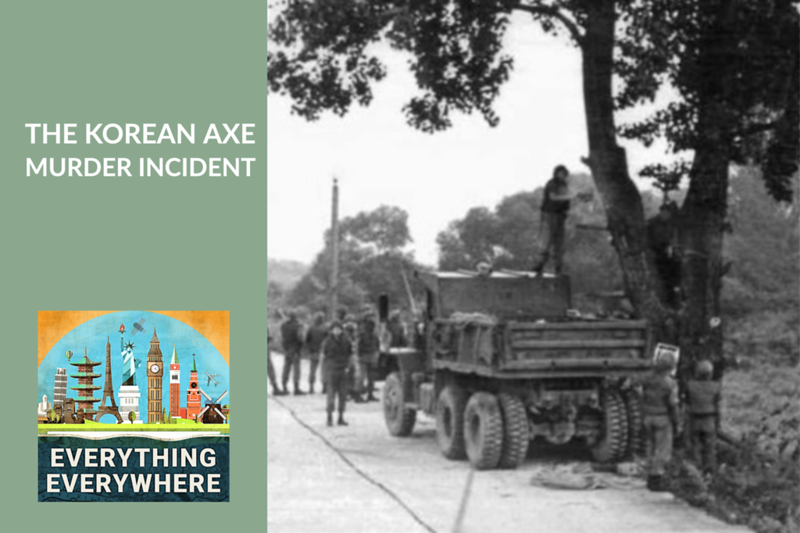 Ever since the cease-fire which ended the Korean war, the demilitarized zone between North and South Korea has been a tense stand-off. Standing only a few meters from each other, soldiers from North Korea stand on one side with soldiers from South Korea and the United States on the other.

On August 18, 1976, the two sides came as close as they ever have to igniting another war.

Learn more about the Korean Axe Murder Incident on this episode of Everything Everywhere Daily.

The Korean Demilitarized Zone, or DMZ, runs across the entire Korean peninsula. It is approximately 250 kilometers long and 4 kilometers wide. Each side of the zone is patrolled by soldiers from North and South Korea in the eyesight of each other.

The DMZ was created with the ceasefire which was signed on July 27, 1953. The agreement was that both sides would fall back 2,000 meters from where the front line was at the time of the agreement, creating the 4-kilometer wide zone today.

The site of the former front is today the military demarcation line, which serves as the de facto border between North and South Korea. I say de facto just because technically the war never ended, and neither country recognizes the other.

Sitting on the military demarcation line is what is known as the Joint Security Area, also known as the Truce Village, or as it is known in Korean, Panmunjom, which was the village just north of the current location before the war.

At the time of the incident, the United States had just withdrawn its forces from Vietnam, making the DMZ the only place in Asia where American forces faced off directly with communists.

In the Joint Security Area, there was a large 100-foot poplar tree that blocked the view between one of the checkpoints and one of the observation posts. The checkpoint was at the South Korean end of the Bridge of No Return, which was the location of prisoner exchanges between the North and the South.

During the winter months, the two points could see each other because the leaves would have fallen from the trees, but in the summer, the view was obstructed. It should be noted that the tree lied squarely within the South Korean side of the line.

The South Koreans and Americans decided that they were going to prune the tree to improve the sightlines.

On August 18, a group of 17 South Korean and Americans went to the tree. Included in the group were American Captain Arthur Bonifas, and American First Lieutenant Mark Barrett.

It should be noted that the soldiers did not have firearms, as per the agreement which dictated how the Truce Village was operated.

After the soldiers began pruning the tree, a group of 15 North Korean soldiers appeared to observe the operation. For about a quarter-hour they observed without saying or doing anything.

Then, suddenly, the North Korean Lieutenant in charge ordered the soldiers pruning the tree to stop.

Captain Bonifas instructed his soldiers to ignore the North Koreans and continue working.

The North Koreans then set a truck over the Bridge of No Return with 20 soldiers armed with clubs and crowbars.

When the North Koreans arrived, they once again ordered the men to stop trimming the tree, and once again, Captain Bonifas ordered them to continue.

It was then that the North Korean lieutenant in charge shouted to his men, “Kill the Bastards!”.

The North Koreans then rushed the tree crew with their blunt weapons.

The stunned South Koreans dropped the axes they were using, which were then picked up by the North Koreans.

They used the axes to attack the American commanders, Captain Bonifas and Lieutenant Barrett.

Captain Bonifas was immediately knocked to the ground and bludgeoned to death by five North Koreans.

Lieutenant Barrett jumped over a small wall and fled into a small tree-filled depression.

The entire incident only lasted about 30 seconds. The American and South Korean forces took the body of Captain Bonifas and retreated in their truck.

They didn’t know where Lieutenant Barrett was.

Over the next 90 minutes, North Koreas were observed taking an ax and going into the depression one by one.

A search and rescue operation later that day found the body of Lieutenant Barrett in the depression, killed by an ax attack.

Two American officers were killed, and several other American and South Korean soldiers were injured.

What happened next brought the United States and North Korea to the brink of war.

The first news of this incident came from the North Koreas. They claimed that they were victims of an unprovoked assault by the Americans and South Koreans.

Around 10:45 a.m. today, the American imperialist aggressors sent in 14 hoodlums with axes into the Joint Security Area to cut the trees on their own accord, although such a work should have mutually consented beforehand. Four persons from our side went to the spot to warn them not to continue the work without our consent. Against our persuasion, they attacked our guards en masse and committed a serious provocative act of beating our men, wielding murderous weapons and depending on the fact that they outnumbered us. Our guards could not but resort to self-defense measures under the circumstances of this reckless provocation.

A few hours later, Kim Jong-Il, the son of North Korean President Kim Il-Sung, presented this to the Conference of Non-Aligned Nations which was meeting at the time, and they passed a resolution calling for the removal of American forces from Korea.

There was one problem with the North Korean version of the story.

The entire incident was recorded with still and movie cameras by the Americans.

The North Koreans probably assumed that this was it. They had won a PR coup and further wounded the pride of the Americans who had just pulled out of Vietnam.

The issue went straight to the White House where President Gerald Ford and Secretary of State Henry Kissenger developed a plan to respond to the North Koreas.

They wanted to show strength to the North Koreans, but they didn’t want to escalate any further.

They came up with Operation Paul Bunyon.

On August 21, three days after the attack, a convoy of 23 American and South Korean vehicles entered the Joint Security Area. There were 16 engineers equipped with chain saws and 60 security forces for protection.

The North Koreans weren’t notified of this action, which is normally required by the agreement on the operation of the Joint Security Area.

Artillery guns were trained on the Bridge of No Return, and explosives on the bridge were readied for detonation in case the North Koreans tried to cross again.

A team of 64 South Korean special forces troops trained in taekwondo was assembled at the foot of the bridge, where they brought out sandbags and weapons.

20 helicopters, including 7 Cobra attack helicopters were in the air behind the troops. There were also several B-52 bombers flown in from Guam that were circling above which were capable of delivering nuclear weapons. Several squadrons of fighter aircraft were in the air for their protection.

Just to top it all off, the nuclear aircraft carrier, the USS Midway, was stationed just off the west coast of South Korea where the DMZ meets the sea.

The Americans also ordered an additional 12,000 troops to South Korea.

Five minutes into the operation, the South Koreans officially notified the North Koreas that they had units enter the area “in order to peacefully finish the work left unfinished”

This overwhelming response was all to cut down a single tree.

The North Koreans assembled troops on their side of the line, but they didn’t do anything.

The tree was removed in 42 minutes, and a 20-foot high segment of the trunk was left standing as a reminder to the North Koreans.

Intelligence analysts which were listening to North Korean radio transmissions reported that they lost their minds at the show of force.

They didn’t think that something like this would happen over something they thought was so minor.

Later that day, North Korean president Kim Il-Sung issued a statement of regret about the incident, which was something that North Korea had never done and has never done since.

Thankfully, the incident didn’t escalate any further. Nonetheless, it was the closest that the Korean Peninsula has been to war since the end of the conflict in 1953.

Facilities in the DMZ have been named after Captain Bonifas and Lieutenant Barrett.

Cement barricades were later put in place to make the Bridge of No Return impassable by vehicles.

The axes used in the attack are today on display in the North Korea Peace Museum.

As for the tree, the 20-foot tall dead dead tree trunk that almost ignited a war is still standing.

Today’s review comes from listener Doubting Mark over at Podcast Republic. They write:

For me, this podcast is a great refuge from the news and craziness of the world. Thanks for helping me get through the pandemic!

Thanks a lot, Mark. There are far too many people offering opinions today, and not enough people who are sufficiently versed in history and science. This podcast is just a small attempt to give people a broader knowledge base so they can better develop their own opinions about things.

Remember, if you leave a review, or send me a question, you too can have it read on the show.