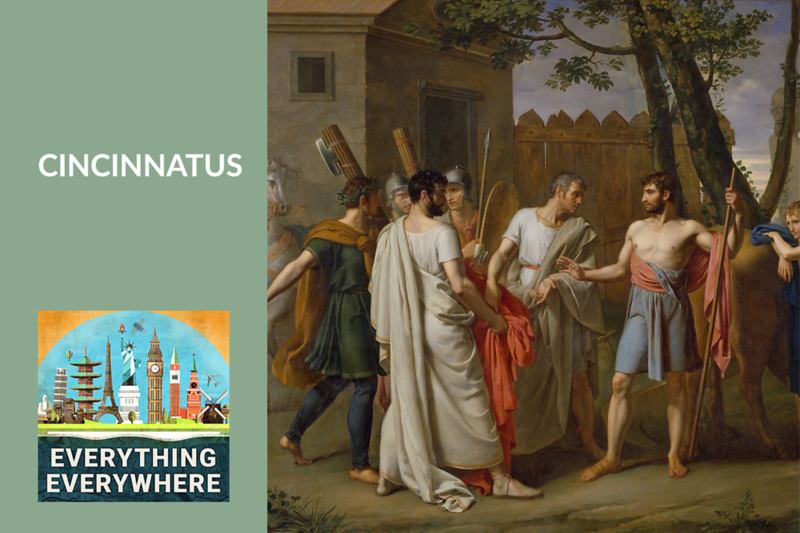 Throughout human history, people have killed, robbed, and put their lives at risk in the pursuit of power. In fact, almost all of history can be thought of as people, tribes, and nations all competing for power.

However, occasionally there are those who have the ability to seize power but refuse to do so.

One man, in particular, did so twice.

Learn more about Lucius Quinctius Cincinnatus, on this episode of Everything Everywhere Daily.

I’ve mentioned before how Skillshare has videos to cover almost any subject you’d wish to learn.

Well, if you are interested in launching your own podcast, Skillshare can help you out there as well. They have videos on every aspect of podcasting, from how to pick a microphone, to how to get everything set up on the back end, to how to editing on your shows.

In the 5th century BC, Rome wasn’t yet the sprawling, conquering behemoth that we think of today. It was one of several states on the Italian peninsula.

They were also only a few decades into the Republican Period and they were still figuring things out.

It was in this environment that we find Lucius Quinctius Cincinnatus. The Quinctius clan was a wealthy Patrician clan that dated back before the founding of Rome.

The family had several Roman consuls, which was a point of extreme pride amongst Roman families.

Lucius’s cognomen, that being his third name was Cincinnatus, which meant “curly-haired”.

The Republic was set up putting all of the power in the hands of the Senate, to which membership was limited to the patrician class.

Needless to say, the Plebeians weren’t too happy with this situation.

In the year 462 BC, the Plebs wanted a written constitution that would put a check on the power of the patricians.

The Patricians pushed back violently against this proposal and it led to violent clashes in Rome. Cincinnatus’s son, Caeso, was one of the leaders of the Patrician forces which attacked the Plebeans in the streets.

In 460 BC, the Plebeians led a revolt which resulted in them occupying the Capitoline Hill. During the uprising, one of the consuls Publius Valerius Poplicola was killed.

As there were always two consuls, Cincinnatus was appointed as his replacement for the remainder of the year.

They took the Capitoline Hill back from the Plebeians, but  Cincinnatus’s son murdered a pleb, fled from the city, and was himself killed outside the walls of the city.

Cincinnatus was so upset with the death of his son and the state of affairs in Rome, that he retired from politics and left Rome to work on his farm west of the City on the Tiber.

While all this domestic strife was occurring in the city, Rome was also fighting with a nearby tribe known as the Aequi.

In 458 BC, the two consuls for that year set out with two armies. One went to relive the town of Tusculum and the other ended up getting surrounded by the Aequi.

The army that got surrounded managed to have five horses break through the lines and send notice to the Senate.

Someone needed to help the besieged army, but there was no one available to help.

The Senate decided to use its emergency powers to appoint a dictator.

The position of dictator wasn’t the same as what we think of when we hear the term dictator. We think of a dictator as being a tyrant or an authoritarian ruler. In Rome, a dictator was a legal position appointed by the Senate. The title had a great deal of prestige and honor associated with it.

In times of emergency, the Romans knew there wasn’t time for debate and petty politics. They needed one person in charge to get them out of the crisis.

The dictator had absolute authority, and the term of the dictator lasted for six months.

The senate picked Cincinnatus to be dictator. He would be the absolute ruler of Rome.

According to legend, a group of Senators traveled to the farm of Cincinnatus to notify him that he was appointed dictator. They found Cincinnatus at his plow.

Supposedly he asked them, “Is everything all right?” and they replied, “it might turn out well for both him and his country”. They requested he put on his senatorial toga to her the news, and when he did, he accepted.

Cincinnatus accepted the position and quickly assembled an ad hoc army of the eligible men in Rome, and took them to rescue the besieged forces. They defeated the Aequi, took the commanders prisoner, forced them to walk under a  yoke of spears, and took them back to Rome for punishment.

Cincinnatus was given a triumph when he returned to Rome. Livy wrote, “It is said that tables spread with provisions stood before all the houses, and the feasters followed the chariot with songs of triumph and the customary jests and lampoons.”

Sixteen days after being appointed dictator, Cincinnatus resigned his position and returned to his farm.

The Romans were in awe of what Cincinnatus did. In an environment where everyone was jostling and fighting for power and authority, Cincinnatus gave up ultimate authority to return to the life of a humble farmer.

Nine years later, the Senate called upon him again.

A wealthy Roman by the name of Spurius Maelius was feared to be buying the loyalty of the Plebians to make himself king.

The Senate appointed Cincinnatus dictator again to solve this problem.

He created a fortified garrison in the city and set men out to bring Spurius Maelius to him. Spurius resisted arrest and fled into a crowd where he was then killed.

Again, 21 days after being appointed dictator, Cincinnatus resigned and went back into retirement.

Cincinnatus went on to become a legend in Rome as he was twice given absolute rule over Rome and didn’t hold on to power a day longer than was required. He became a model of Roman virtue.

Supposedly near the end of his life, his son was charged with military incompetence. However, the jury refused to charge his son, even though he was probably guilty because no one wanted to be the one to tell Cincinnatus.

The legend of Cincinnatus lasted far longer than Rome did.

Veterans of the American Revolution formed an organization called the Society of Cincinnati.

And of course, Cincinnati, Ohio, and Cincinnatus, New York were both named in honor of Cincinnatus.

A more recent example might be the Cincinnatus of Africa, Nelson Mandela. He was in a position where he probably could have been president for life if he wanted, but he voluntarily stepped aside and gave up his power.

The legend of Cincinnatus still had relevance for the world today. The desire for power is as great as it ever was. Yet, few people are still willing to step up, do what is required, and then step away from power.