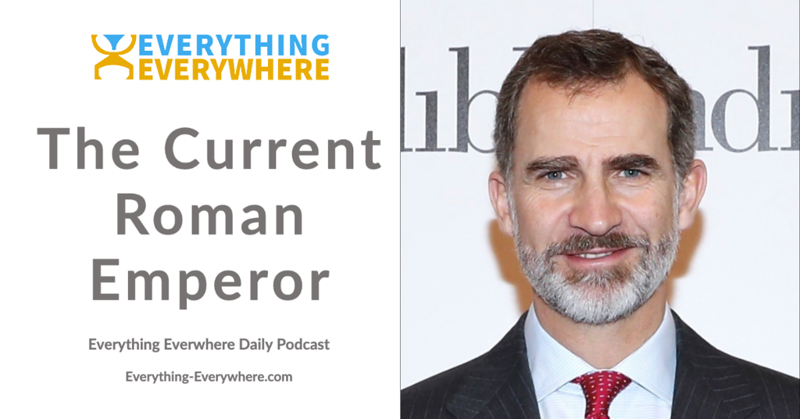 Here is a question I’m pretty sure no one listening to this has ever bothered to ask: Who is the current Roman Emperor?

Obviously, the Roman Empire doesn’t exist, but if it did, who would be the claimant to the Imperial throne?

Explore with me the very convoluted answer to this very meaningless questions on this episode of Everything Everywhere Daily.

My audiobook recommendation is How to Think Like a Roman Emperor: The Stoic Philosophy of Marcus Aurelius by Donald Robertson.

Roman emperor Marcus Aurelius was the final famous Stoic philosopher of the ancient world. The Meditations, his personal journal, survives to this day as one of the most loved self-help and spiritual classics of all time. In this book, psychotherapist Donald Robertson weaves stories of Marcus’ life from the Roman histories together with explanations of Stoicism – its philosophy and its psychology – to enlighten today’s listeners.

While the question I pose for this episode might not be relevant as there is no Roman Empire, it isn’t unheard of. Many countries with former monarchies have families today who are claimants to the throne or who we could point to, to say that they would be the monarch if they still had a monarchy.

For example, 44-year-old Georg Friedrich, Prince of Prussia, is the head of House Hohenzollern. He would be the German Kaiser today if they still had a monarchy. Likewise, 83-year-old Vittorio Emanuele is the head of house Savoy and would be the claimant to the Italian throne.

In Spain, the monarchy was ended by Generalissimo Francisco Franco but then revived by him upon his death, and they dipped back into the same family to pick the new monarch.

So in the same vein, asking who the current Emperor of Rome would be isn’t a crazy question. It is, however, a very complicated one. First, because of the time involved since the dissolution of the empire is so long. Second, because of the debate as to what the Roman empire even was. and finally, as to how you would determine claimants to something which never really had a set system of handing off power between Emperors.

As we go back in time, the initial problem stems from the fact that the Empire split in two. If you remember back to episode 1 of this podcast, (and you did listen to episode 1 right?) the Byzantine Empire was really just nothing more than the Roman empire which continued in the East.

The Roman Empire then, actually fell in the year 1453 when Constantinople fell to the Ottoman Turks and the last Roman Emperor Constantine XI Palaiologos was killed.

So the first way to approach this problem would be to ask who should have been the Emperor after Constantine XI?

The next in line for the Byzantine throne would have been Constantine’s brothers Demetrios and Thomas. Demetrios, the other brother, died without children, and his younger brother Thomas claimed the throne. Thomas had a son Andreas who used the title Imperator Constantinopolitanus and was declared as such by the Pope and other European Monarchs.

However, without a real empire, he had little money yet spent like he was a real emperor. He left the title of Emperor in his will to Ferdinand and Isabella, the monarchs of Spain.

That would mean that the legal claim to the title of Emperor of Rome would be tied to the Spanish monarchy, which still exists today. So by this legal interpretation, the claimant to the title of Roman Emperor could be King Felipe VI of Spain.

That is one interpretation.

Another would be that of bloodlines. The descendants of Thomas Palaiologos didn’t fare too well. However, he did have many children, in particular a younger daughter named Zoe.

After the fall of Constantinople, there was debate as to where the new center of Orthodoxy would be.  The Russians made a strong claim and tried to establish Moscow as a New Rome (or, because Constantinople was already New Rome, it would be the New New Rome).

As such, the Russian ruler Ivan III, aka Ivan the Great, married Zoe to establish a claim to the legitimacy of the Byzantine Empire. He also started using the title Tsar, which means Caesar in Russian.  So by bloodline, the Roman Emperors would have been in the Russian royal family.

The Russian royal family was mostly wiped out during the Russian Revolution, but some minor members of the house remained. Claimants to the Russian throne are disputed, but at the time of recording, the person with the best claim is 97-year-old Prince Andrew Romanoff, who was the grand-nephew of the last Tsar Nicholas II.

Finally, there is a third possible way to view a claim to the Byzantine throne: conquest. Roman emperors were often whoever had the army on their side. By this logic, when the Ottomans took over, they became the right rulers of the Roman Empire.

The Ottoman Empire lasted for several hundred years and fell after WWII. However, the Ottoman house, like most royal houses, still survives. The current head of the house is 87-year old Dündar Ali Osman, who is the great-grandson of the Sultan Abdul Hamid II.

However, it gets more confusing.

The Byzantine Empire was the continuation of the Roman Empire, but it wasn’t Rome.

Constantinople actually had control over Rome for a few hundred years after the supposed fall of the Roman Empire in 476. In fact, they didn’t really lose control until 752.

It wasn’t long after that when Charlamene swept into Italy from France and was crowned “Emperor of the Romans” by the Pope in Rome on Christmas Day in the year 800.

The Holy Roman Empire was around for over 1,000 years in some form until it was officially dissolved in 1806 during the Napoleonic Wars.

Here too we have two different branches were we could find claimants.

The first would be Napoleon Bonaparte. He declared himself “Emperor of the French” and by conquest, took over much of the former Holy Roman Empire.

Napoleon was disposed of, but house Bonaparte still exists. The current head of the house is 34-year-old Jean-Christophe, Prince Napoléon.

The claim here is the weakest simply because Napoleon’s claim wasn’t directly a claim on the Holy Roman Empire.

The current head of House Hapsburg is 59-year-old Karl von Habsburg, who would be a claimant to both the Austro-Hungarian Empire and the Holy Roman Empire.

There are more rabbit holes you could go down to make arguments.

You could say that Napoleon’s claim should go to house Burbon which was restored after he was disposed of. By that logic, the claimant would be 46-year-old Louis Alphonse de Bourbon of Spain.

Or, you could say that it is now tied to the President of France after the monarchy was abolished.

Or, you could say that because the Emperor had to be at least nominally approved by the Roman senate, the current Mayor of Rome, Virginia Raggi, could have the best claim.

Likewise, you could say that the European Union itself is the successor to the Roman Empire.

Or, what many people usually come up with first when they think about this question, the position could be in the person of the Pope, who was also the temporal ruler of the Papal States for centuries and now just rules over Vatican City in Rome.

As I noted before, none of this really matters. None of these people are actually making claims of being the Roman Emperor, and if they did it wouldn’t even matter.

Nonetheless, it is interesting that even after so much time, we can still make modern linkages back to ancient Rome.