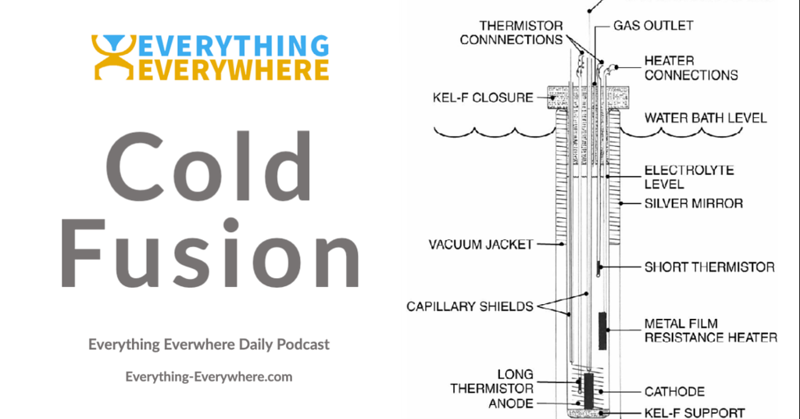 On March 23, 1989, two electrochemists from the University of Utah, Martin Fleischmann and Stanley Pons, took part in a press conference where they announced to the world that they had achieved sustainable, tabletop nuclear fusion.

The events which followed were what is called in scientific circles: a dumpster fire.

Yet, despite everything, thirty years later, there is a small but growing community in the world of physics who are sure that something happened.

Learn more about the story of Cold Fusion on this episode of Everything Everywhere Daily.

Going through airport security can be a real pain. But, its something you have to do.

Wearing a Scottevest jacket can make your next trip to the airport a breeze. Just have all your electronics in your pocket and put your watch or any other metallic things you have on you in your pockets as you wait in line. Then just put your jacket in the x-ray machine and viola! You don’t have a pile of loose things to worry about losing.

I do this every time I go through the airport and it saves me tons of time and hassle.

If you have noticed that we do not have a supply of unlimited clean energy at our disposal, then you probably realize that the promise of Cold Fusion never quite delivered.

It is worth the time to go back to see what happened and where everything went wrong.

they conducted a rather simple experiment with the element palladium, heavy water, and electricity.

Palladium had been known to have a unique ability to store hydrogen within its metal matrix since the 19th century. This isn’t controversial.

There had been periodic reports in the early 20th century of scientists who found anomalous results.  In the 1920s Austrians, Friedrich Paneth and Kurt Peters found helium produced in a similar experiment. Helium is the product when two hydrogen atoms fuse together. They published a paper but later retracted it when they claimed the helium came from the atmosphere.

In 1927 a Swedish researcher John Tandberg also found evidence of helium production with palladium and water and tried to get a patent. The patent was denied however after the retraction of the Panenth and Peters paper, and because he couldn’t explain exactly how his system worked.

In the Pons and Fleishman experiment, they ran electricity through some heavy water, which is water with a larger amount of the hydrogen isotope deuterium, and a palladium cathode. They turned it on and then let the system run.

For a long time, nothing happened. The temperature of the system was about 30C which was what was expected given the energy going into the system.

Then, all of a sudden, the temperature would jump up to 50C and stay there for about 2 days. This was done without any changes to the system or the energy being put in. The temperature eventually comes back down, but sometimes, this temperature spike would be repeated on the same setup.

So far, nothing here is wrong. You have two scientists who conducted an experiment and got a result. Maybe the result was the cause of a glitch in the equipment, maybe it was the cause of bad data, or maybe they really found something.

Either way, that is how science works.

What came next, however, is where things really went off the rails.

A researcher named Steven Jones from nearby Bringham Young University in Utah was doing similar research. His research focused on something called Muon-catalyzed fusion which also involved fusion at low temperatures.

The two teams became aware of each other’s work and agreed to submit papers to the journal Nature at the same time. They were to meet at a Utah airport on March 24 to simultaneously submit their papers via FedEx.

The University of Utah got wind of what was happening. If what Pons and Fleishman found was true, then they could get a patent on something which could be worth trillions of dollars. The University of Utah would be the patent holder, and it would make it one of, if not the wealthiest universities in the world.

They wanted to establish priority on the discovery for any future patent claims. They also wanted didn’t want to get upstaged by their in-state rival BYU.

Pressured by the administrators at the University of Utah, Pons and Fleishman held a press conference on March 23, the day before they were supposed to jointly submit their papers with Jones.

This was when the problems started.

There are certain ways you do things in science. There is an established norm for releasing finding to the rest of the scientific community. A press conference is not how you do it.

Prior to the press conference, Pons and Fleishman hadn’t really shared their results with anyone. They hadn’t published anything. No one had verified or replicated their results.

Immediately after the event, this became the top story around the globe.

Researchers all over the world tried to replicate what they did. Pons and Fleishman didn’t actually reveal any details about their process or setup, mostly for reasons of patent protection.

There was a flurry of results with researches from prestigious institutions like Caltech, CERN, and MIT. Almost everyone who tried couldn’t replicate their results.

By April 30, just a bit more than a month after the press conference public opinion had turned. Major newspapers like the  New York Times called Cold Fusion dead.  The next day on May 1, the American Physical Society held a session at their annual conference on Cold Fusion where 8 of the 9 panelists said this was dead and the other one abstained.

Steven Koonin of Caltech said the entire episode was the result of “the incompetence and delusion of Pons and Fleischmann.”. He got a standing ovation.

The rise and fall of Cold Fusion all happened within the span of 5 weeks.

Over the next few months, papers poured in showing an inability to reproduce Pons and Fleishman’s results.

The State of Utah put $4.5 million into a Cold Fusion research institute which soon closed to a lack of funds.

Stanley Pons moved to France to do research and eventually renounced his American citizenship and has since refused to do many interviews.

Martin Fleishman moved back to his native Britain and eventually died in 2012 from complications with Parkinson’s Disease.

You might think that this is the end of the story. Scientists announce something which can’t be replicated, get denounced, and then sink into obscurity.

While most researchers couldn’t replicate Pons and Fleishman’s results, some did.

There has been an underground movement of researchers who have kept trying to replicate the results and explain what happened over the last 30 years.

These aren’t just guys in their garage wearing tinfoil hats trying to create perpetual motion machines. These are people at legitimate research institutions.

The debacle of 1989 so discredited the field, most people have to work in secret lest their careers suffer damage.

For starters, they changed the name of the field from Cold Fusion and all the baggage that came with it, to Low Energy Nuclear Reactions or LENR.

There has been more reporting of the field which isn’t immediately dismissive. Scientific American, Nature, and other respected scientific publications have all written on the subject in the last few years and gave an honest and balanced review of the state of the research.

Large research labs such as Los Alamos, the US Navy, and even Google have been doing some research into the phenomena.

So where are things at?

If the effect is real, then there are two major things which will need to be done to move forward:

As for number one, there still isn’t a way to consistently replicate the production of energy.

One current theory is that it might have to do with the palladium metal used as the cathode. The metal might need to have microscopic fissures or flaws in the metal to allow hydrogen to enter. Each piece of metal used will differ at an atomic level, and those differences might be what is causing the inability to replicate results.

Until researchers can confidently say “do this and you will get this result”, it is hard to see this going anywhere.

Second, if something is happening, it is almost certainly not fusion. Fusion, being defined as the fusing of two atomic nuclei, is well understood and it has specific radiation signatures that don’t appear with these lower temperature phenomena.

One theory, which is probably the leading one at the moment, is that what is happening is electron capture. Hydrogen nuclei, which is just a single proton, are being merged with an electron to create a neutron. This theory has tons of problems as well, as it shouldn’t be releasing energy.

Another theory is that hydrogen atoms are just being put into a previously unknown state, which gives off energy. This new product has been dubbed a hydrino.

As of today, Cold Fusion, or Low Energy Nuclear Reactions, or whatever you wish to call it, doesn’t have a whole lot of momentum. While there is still a small community of researchers until they can show something definite and reproducible, and provide a theory as to what is happening, Cold Fusion will be relegated to the fringes of science.

The executive producer of Everything Everywhere Daily is James Makala.

If you ever wanted to give some direct feedback on a show, provide show suggestions, or just talk about some of the previous episodes, I’ve started a Discord server.

If you aren’t familiar with Discord, it is basically an online chat room that you can use as a standalone app, or in a browser, or on your phone.

I’m usually there in the evenings and occasionally throughout the day.

Just go to everything-everywhere.com/discord or click on the link in the show notes.